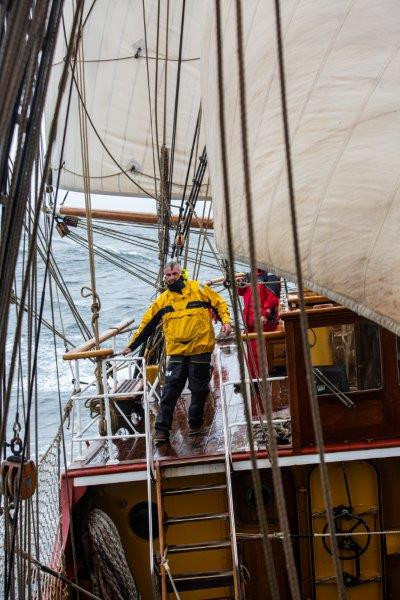 Last night the wind kept blowing at about 20kn from the NE, as we keep a course that will bring us to the first island of the Falkland Archipelago where we plan to set foot, the so called New Island.

With all our canvas set we continue sailing at a good 8 to 9kn through the misty weather and the drizzle, leaving behind the “Roaring Forties” to enter another mythical range of latitudes, the “Furious Fifties”. There we were welcomed by some of the beautiful Commerson dolphins. Their small body size of about 1.5m in length, their black and white pattern and rounded dorsal fin makes them quite unmistakable. Their distribution is restricted to Argentinean and Chilean Patagonia, being quite common around the shallow waters around Falkland Islands as well. A separate population inhabits the remote coasts around Kerguelen Island. Falklands coasts are rich on fish, and besides birds and fishermen they also attract dolphins, as we have seen during the last days. Dusky first then Peale’s and Commerson today have been showing up intermittently, as those latest species generally prefer shallow waters closer to land.

From midday on, gradually many hands gather on deck and assisted by the permanent crew we start taking sails down and furl them, as we get closer to the anchorage and the wind picks up to 30kn. Before even sighting the islands, proximity of land was announced by several King cormorants paying us a visit. Coastal birds as they are, they don’t venture very far off their nests during this time of the year. Shortly after the rocky shores of New Island appear at our starboard side, veiled by drizzle and mist. A sight that might have been equally amazing for the first people who took a glimpse of the islands. And it is thought that they were no less and no more than the crew of one of Magellan’s fleet boats, the San Antonio.

When the remaining 4 ships of the expedition were already in the Strait of Magellan around the 23th of October, and still not knowing that they actually had found the passage they sought, the San Antonio, decided to defect and try to come back to the bay of San Julian. There the fleet had overwintered, and one of the ships had been lost. There as well, Magellan took care of the ones involved in a mutiny attempt, and had left Juan de Cartagena and the expedition’s priest marooned in an island as punishment. It is very probable indeed that the San Antonio, in her way to the North, spotted for the first time Falkland Island far away in the East.

With this we open a parenthesis on the Ferdinand Magellan stories, since we will spend the next days exploring different sites on the Falklands. We will leave his expedition route for the moment to enjoy their landscapes and wildlife, but soon the Europa will resume her way into the waters first discovered for the Europeans by Magellan and his men, when she will enter the Straits named after him and make port in Punta Arenas.

Increasing winds made for several sailing manoeuvres until past 14:00h in the afternoon, as we approach our anchorage. Bracing sharper first then gradually dropping the remaining sails. Last ones to be clewed-up were the Top sails, just before starting the engines to help dropping anchor in the bay in front of New Island settlement.

Falklands and with them the famed “Furious Fifties” latitudes welcomed us with conditions that really pay tribute to their reputation. Overcast and foggy weather together with rain and howling winds. The conditions didn’t improve along the afternoon as we sit and wait at anchor for a truce that didn’t came. Under this circumstances we will have to postpone our visit ashore, probably until tomorrow morning when the winds are forecasted to abate.

In the meantime we could have a good rest, as from now on and for the next days we are off the Sea-watches. Also we could attend to the introductory talk about Whales and Dolphins that had to be rescheduled a couple of days ago due to sail handling.

Hoping for a better weather tomorrow, we spent a good and relaxed evening in the ship’s bar, or having a rest, working on our pictures or writing our diaries. Out there, winds blew over 30kn under rainy weather.