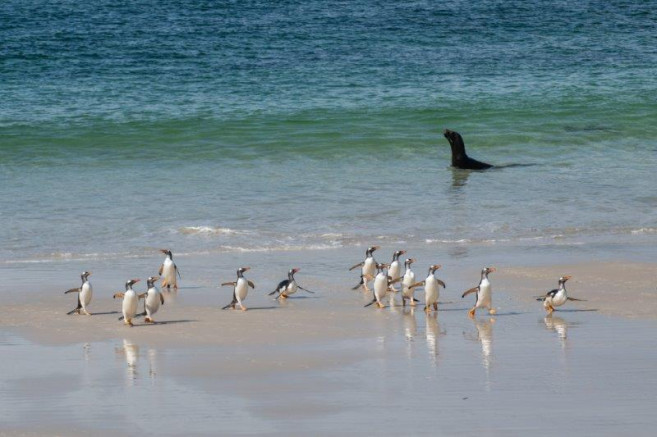 Today we woke up to a completely different weather situation than yesterday afternoon and evening. The strong winds, rain and overcast sky gave way to a light breeze and a partially cloudy weather that kept clearing up during the day.

Perfect conditions for our first landfalls. New Island is the most westerly inhabited island of the Falklands and here we plan to spend the entire day. Its spectacular scenery and large amount of wildlife makes really worth the time here.

This surprising and bountiful island is located in the far south-west of the Falklands. And besides being home for countless species, it also represents an important site for the history of the archipelago, mostly related with sealing and whaling.

The first American whaling vessels anchored here in 1774 and during the next years the island suffered the depletion of marine mammals, penguins, albatross and other wildlife as source of oil and food. A few years later an American from Nantucket, Captain Charles H. Barnard together with a handful of his crew, marooned on New Island in 1813 whilst engaged in a sealing venture around the Falklands on board the Nanina. They constructed a rough stone shelter at the head of Settlement Harbour on New Island, same place where we spent the night at anchor and did our first landing today. Nowadays at the same place the “Barnard Museum” stands.

The whaling history continues when in 1908, the Norwegian entrepreneur Salvesen established the only land-based whaling station in Falklands that functioned until 1916.

Besides those activities, a Crown lease was issued for New Island in 1860, and the first succession of settlers engaged in sheep and cattle farming on the island. But in 1972 the island was sold to Roddy Napier and Ian Strange and they started to getting more involved with scientific researchers and tourism, and nowadays the whole island is regulated and owned by the Falkland Island Conservation Trust, depending from the Wildlife Conservation Society. Different farmers or Island caretakers can get a lease from them and make out of this fantastic place their home. At the moment the only permanent settlers in the island are Giselle, who we meet during the morning landfall, and her husband. Regularly they also host photographers, filming crews and scientists eager to study the nature of this bountiful island, that in fact contains one of the largest concentrations of wildlife in the Falklands.

New Island also has been a relatively popular landfall for smaller expedition cruise vessels since 1970, becoming lately a favoured visit for many.

For us, last hours had been putting up with hard winds and rain, while waiting at anchor, but from early this morning the air was filled up with high expectations given the weather change for good and the good chances for setting food ashore.

After breakfast the zodiacs drove us to “Coffin Harbour”, where the small settlement is located, and right above the landing beach, first building we find is the Barnard Memorial Museum, that will be open later on when we come back here to be picked up and return to ship.

The setting is beautiful with green meadows, a white sand beach patrolled by Kelp and Upland geese, Turkey vultures gliding over our heads and Cara-caras perched on the picturesque shipwreck of the Protector, beached at this shores. Built in 1943, she arrived in Falklands in 1949 to work for the sealing industry, then she was reassigned as freighter between the islands, ending her life in 1969.

Another shipwreck could be seen at a bit of distance on the next beach further South. The Glengowan bow sticks off the water there. With her iron hull, an unlucky turn of events made her catch fire during her maiden voyage, on Stanley in 1895, while she was loaded with coal. In 1910, her remains were towed to New Island to be used as storage for the operations of the South Harbour whaling station.

Once we all set foot ashore, our guides led the way along the path that leisurely heads to the top of the 170m high cliffs overlooking at the ocean on the western side of the island. This whole precipitous coast is home for several Black-browed albatrosses and King cormorant colonies, together and mixed up with large rookeries of Rockhopper penguins. The scene that unfolds in front of us as we reach the top of the cliffs is absolutely breathtaking. On top of having a good leg stretch after about 10 days confined on board the ship, the opportunity to spend a quiet time sitting right next to all those birds is priceless.

Many Black browed albatrosses lay on their eggs, others display courtship behaviour. Mixed with them the ubiquitous Rockhopper penguins climb up and down the steep slopes going back and forth from their nests as well. In-between all of them, a couple of the more robust and slightly different Macaroni penguins try to pass unnoticed. The main breeding area for these species is a bit further South, mostly in South Georgia Island.

Lots of King cormorants with their feather tufts adorning their heads and deep blue rings around their eyes are also incubating and several still build their nests, on a clearings amongst extensive tussock grass patches. With all this plentiful of food, Kelp and dolphin gulls, Skuas and Striated caracaras seek for any chance to get a morsel stealing the eggs of the other birds.

Two hours later, and after having a quiet time and great chances to soak into the fabulous landscape and in those birds’ lives, our guides started the way back to the beach, where now, Giselle was waiting for us with the Barnard

whaling Museum open. There, besides having the chance to have a look at the old whaling artefacts we could acquire some of the Falklands and Wildlife Conservation Trust souvenirs on sale.

From there the zodiacs were about to shuttle us back on board for lunch, while Europa re-positioned a couple of miles to our next spot for an afternoon landing.

Soon we anchor again in the so called “Ship Harbour”, on flat calm waters and sunny conditions.

Not much later we are ready again to go ashore. Still in New Island, but a bit further North. The island offer several landing spots in a variated terrain and characteristics, making of the area great spot to spend a full day.

Now the boats brought us to a pocket sand beach. In low tide as it was, it is rimmed by large rocks covered in algae, Cirripedia and mussels. Striated caracaras are all around, and Magellanic penguins dig their burrows on the soft ground that leads to the grasslands in the background. Further away, as we walk along an old dirt-road, we can all have an overview of “North Harbour beach”, with its water ponds and plenty geese in the neighbourhood. Nowadays is teeming with life, in early 19th century it was home for sealing operations. A little bit more hike over flat terrain brought us to the large Gentoo penguin rookery that characterises this part of the island.

Located at the top of the ample saddle between North Bluff and the rounded Bold Hill, those penguins have fantastic views over great part of the island. Downhill, an open valley offer good access to the sea, along a lovely white sand beach. Large gatherings of them were in the water trying to get ashore, while other groups on land do their best to jump into the swells. None of them seem to dare making the first move as a large Sea lion on a hunt patrols the surf. This is one of the few well known spots where this behaviour can be often observed. There it was worth to sit down and spend time enjoying the views and watching the seal attempts to catch a penguin, using the wave breaking area as a hunting area. It wasn’t a successful undertaking during the 45minutes we were there, but a couple of times his efforts were close to be paid off.

On shore Flightless steamer ducks and Snowy sheathbills rest, Skuas and Giant petrels fly around, while half way uphill Striated caracaras and Magellanic penguins are at home. Walking up the slopes over the beach, our guides led us to the impressive cliffs of North Bluff. Down below, furious seas break at their base, contributing to a magnificent and captivating setup. The top of those rocky faces are used as well by Black browed albatrosses, Cormorants and Rockhopper penguins to set their nests.

From there we made our way back to the landing beach where the boats were ready to shuttle us on board for dinner. After that, a forecast promising fair breeze may allow us to set sail overnight towards Jason Islands, the Northwesternmost corner in Falklands.

Courses and Top sails were soon unfurled and it didn’t take long until crew was sent aloft to unfurl all Squares. And at about 22:00h anchor was heaved and under engine we got off Ship Harbour. Not much later crew start to set sail with the help of some voyage crew and about 02:00AM the engines could be turned off and Europa sails her way to Steeple Jason.