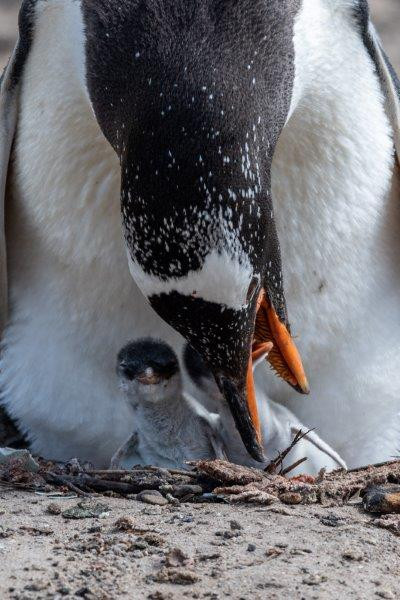 Still a rather windy night, that anyway gave no problems to hold our anchor at Hope Harbour next to West Point settlement, gave way to a calmer morning.

Blue skies with just some clouds developing here and there, and sunny weather were inviting us for landing.

Right in front of the ship we could see the little settlement owned by the Napier family since 1959. Roddy and his wife Lily run the place as a traditional sheep farm, but due to their advanced age, they leased the island and the farm to Adam and his wife and is them now who take care of the place, balancing farming and nature conservation. Besides the couple, today also a small and sturdy sailing yacht was anchored here, owned by Lev Poncet, from the renown family that has been sailing for many years in Falklands, South Georgia and Antarctica. He was even part of the Europa crew about 20 year ago and today after all this time he got the chance to visit again our beloved ship while we were ashore and remember the old times with Captain Klaas and Marianne.

Yesterday he sailed along us in the good winds for the last couple of hours before we both dropped anchor at West point Island, and he could get some good shots of the Europa under sail, heeling Close-hauled on her way here.

They are all representatives, in their different styles, of an independent way of life that is sadly slowly disappearing from the Falklands and the world itself.

After breakfast and in the good weather that welcomed us to the island, we landed at the farm’s concrete jetty and after chatting a bit with the locals, soon started our visit to this fantastic spot. Whilst we were ashore, ashore, they had a tour on the Europa, our pride ship that arises interest everywhere she makes port or drops anchor. For us, a short easy hike of about 2 km over grazed grassy slopes and turf, in a sort of plant carpet, brought us from the settlement bay at the West coast of the island, to the cliffs at its Eastern side, with the appealing name of “Devil’s Nose”.

At the end of the flagged track, tussock grass slopes and impressive cliffs both teeming with wildlife awaited for us.

Muddy as t was amongst the tussock stools, we made our way to the edge of a pretty Black browed albatross colony. Amongst them hundreds of Rockhopper penguins also find place for their nests.

Wooden and metal poles in the fashion of a basic fence mark the maximum approach distance we can have to their nests, and indeed it was close to them where we could all sit in silence and enjoy the doings of the abundant birdlife.

All the space available for nesting in the clearings amongst the high grass is taken by elegant albatrosses and Rockhopper penguins, all sitting on their eggs. Wind swept the area straight from the sea and up the neighbour cliffs, and together with the relatively early time made for the birds to be quiet, sitting and braving the conditions. Just some of them where dying around or walking up and down the colonies. For us, the wind blowing on this sunny day didn’t stop our walks to see them and later on, keep on our way to the scenic viewpoint of Devil’s Nose. There it was possible to climb down the quartzite cliffs adorned by the colourful orange lichens and patches of tussock grass. Several other Black browed albatrosses perch their nests here, while below our feet ferocious swell crashed against the rocks.

The scene is astounding, and the good weather helps all of us to greatly enjoy this nature’s bounty.

This whole part of the island is home for over 2000 pairs of Black browed albatrosses plus about 500 couples of Rockhopper penguins, amongst many other species of birds.

Landscape from this site is pretty amazing, with Devil’s nose dropping straight into the untamed seas, while the coastline stretches on an almost continuous cliff.

The time to sit and enjoy the views soon was over and it was time to pick up our cameras, loaded now with countless shots of one of the most breathtaking corners in the Falklands, and start our way back to the settlement. Zodiacs were ready to pick us up and bring us on board for lunch. Just about 2nm away lays our next destination for the afternoon, Death Harbour, and in there the little bay called Grave Cove.

This landing site is located on the main West Falklands, not as until now on the small islands and islets surrounding it. Here as well, 15km away from the beach, the place is manned by yet another farm. Conservation efforts again live together with their activities. One of them is taking care of about 3500 sheep, which some of them could be seen grazing around the meadows and hills all around during the landing.

Soon the rubber boats shuttle us ashore at the white sand beach of this so named Grave Cove, that receives its name from 5 o 6 sealers buried here during sealing era in the 18-hundreds. Even in 2004 a leg bone was found and re-buried by the farmer who owns the land.

An easy stroll of about kilometre through the grazed pastures leads to the main attraction of this spot, a large Gentoo penguin rookery. Before reaching it, on our little hike we left behind hundreds of Upland geese, some Ruddy headed, Crested ducks and Spectacled teals.

But most of all, this island’s region is home of the largest Gentoo penguin rookery on Falklands, with numbers rising to about 5000 pairs. The colonies scattered in groups over the tops of the countless hills count with incubating individuals but some already were busy feeding their young chicks. Many were making their back and forth the wonderful long sand beach located nearby, jumping in and out the breaking swells of the turquoise waters.

This classical Falklands beach is the main access for countless of them to their nests ashore. Groups of them were swimming and rushing off the sea. It was lovely to have enough time to sit and observe them, being careful not to block their way.

And is not just them enjoying this beach, they share it with a few Commerson dolphins that swim around amused as well by the good surfing conditions. Guides and crew ashore were wearing dry suits, as they knew from previous visits to this cove that often they can take a swim with them. And off they went for a while, braving the swell to get a close and enchanting encounter with such lovely dolphins.

But the area offers more things to be seen, and while a few of us already returned to the ship, others joined a longer hike along the cliffs on the western side of the beach. From there the views over the headland called Death’s head, Penguin point and West Bluff are really impressive, all peppered as well with Black browned albatross nests, all occupying small shelfs on the rocky faces.

Under our feet and seemingly as far as we can see, the coastline stretches on high rocky precipices cut by deep gullies, on a stunning set.

After that great afternoon ashore, it was time to get back on board for our evening meal and to spend a quiet night at anchor. Voluntary anchor watches done by some of the Voyage crew keep an eye overnight until 06:00AM when we heave anchor and start our way towards Carcass Island.