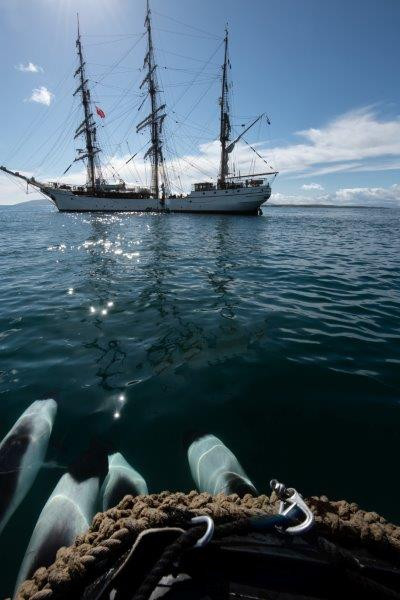 We woke up when already the Europa was motoring the few miles between the good anchorage at Grave Cove and the Southwest coast of Carcass Island. And as planned, during breakfast we were already dropping anchor there, in front of the so called Leopard Beach. Several of the beautiful Commerson’s dolphins had been following us for the last bit and they were still checking our hull when the zodiacs where dropped in the water. And what a new entertaining thing for them this was! As soon as they touched the water and the outboards are started, it represented a whole new world of amusement for those small and playful dolphins.

They accompanied all the shuttle zodiacs going ashore, boarding them at a hands reach from the inflatable pontoons.

After the cheerful rides to the landing site, we set foot at Carcass Island, on the beautiful Leopard beach. The curious Island’s name derives from the HMS Carcass, a sloop that arrived here in 1766 together with the frigate HMS Jason and the store ship HMS Experiment to establish the first British settlement at the nearby Port Egmont. The HMS Carcass had also the mission to survey the waters around the Island that nowadays bears her name.

This scenic island has been always free of rats and cats, allowing wildlife to flourish. Gentoo and Magellanic penguins welcome us ashore, heaps of Upland geese, together with a few Ruddy headed, wandered the meadows above Leopard Beach. There, both species of penguins nest. A bit further away healthy tussock grass slopes are home for many other birds, including the endemic Falkland sniper, Finches and Wrens, good indicators of the rat-free character of the island.

The morning walk was about to bring us all the way to Carcass settlement, a couple of kilometres away on an easy hike following the coast over the green hills. The picturesque settlement is now home for Rob and Lorraine McGill, who have lived here for over 30 years, but the island itself has been inhabited since 1872. Half hidden behind Monterey cypress trees, cabbage palm and New Zealand flax, lay the sheds, houses and buildings where we were welcomed by Rob and his team running the lodge. Three Chilean employees work for him, helping with the place maintenance and today preparing a nice Hi-Tea for us. While we were having this welcoming refreshment after the morning walk, the Europa repositioned from Leopard beach to here, ready to pick us up.

A bit of relaxing time at the beach followed the Tea, Coffee, Hot chocolate and what it seemed an endless flow of homemade cookies and pastry.

Blackish cinclodes, Crested ducks, Oystercatchers, Ruddy headed geese and many other birds tag along with us along the shoreline while waiting for the zodiacs.

Our next destination after leaving Carcass behind was the neighbour Saunders Island. Its Northwest tip is crowned by the high hills of Mt. Harston, over 1420 feet in altitude, and is almost separated from the rest of the island by the narrow known as The Neck, just the place where we were heading. Saunders is the second largest island in The Falklands and is named after the 18th century British Admiral Sir Charles Saunders, who sailed around the world with Lord Anson in 1740. After this voyage they recommended the establishment of a settlement here, and that’s how the first Falkland’s capital, Port Edgemont started.

We dropped anchor on the southern side of The Neck at 15:10h, where conditions were calm. Despite being quite cloudy it was the perfect afternoon for a landing, hike and some wildlife spotting. As we left the ship towards the island there were Gentoos swimming and diving by the bow of the zodiac. Disembarking the boats at the beach we were greeted by some more Gentoos wandering around. We paused to watch them and have a chat with the local owners, the Pole -Evans family, who welcomed us to the island and had set up a mobile “shop” in the back of one of their land rovers!! Very authentic. They came here every time a tourist ship stops from their home located about 10km away on the Eastern coast of Saunders. They care for their 6000 heads of sheep and combine the farming with environmental projects, working together with the Falkland Conservation. After chatting with them about their quite unique way of life, the island and the wildlife inhabiting it, we began our visit.

The first thing to see was a trypot abandoned on the beach. These are always fascinating but serve as a stark reminder of the sealing days that greatly depleted the pinniped and penguin colonies in Falklands and almost elsewhere in the world.

As we wandered a few more metres we quickly came upon many Gentoos in their rookeries. Favouring the top of mounds for their busy nesting areas, they keep stealing rocks from each other, waddling about, fighting with their neighbours and all the other day to day penguin business. Definitely makes for some fascinating viewing. After a few minutes there we moved along as the highlight for many on this island was going to be the King Penguins. The Neck has been home for a small group of them for many years, and today they didn’t disappoint.

Throw in some ‘super fluffy fat’ chicks and everyone is happy. What a joy to see them. About ten of them were in the moulting process. It seemed as if they had a woolly hat and scarf on. The King penguins were a real treat, and some of us were just happy to sit and observe for the afternoon. There were adults sitting on their eggs, with their fat bellies covering them, there were others just having a rest and even a couple trying the mate.

A smaller group of us moved further along first coming across the remains of a Fin whale. It had been laid out and the local that acted as our guide, gave us the story behind it. It was a young Fin whale that had washed up dead on the beach a number of years ago. It was moved inland and it is now presented for visitors.

Then, most strolled down towards the northern beach of The Neck, which was alive with more penguins scrambling about in the sand and breaking swells, and a large selection of birdlife scurrying along the shore, Snowy Sheathbills, Dolphin Gulls and Oystercatchers amongst others. We are very lucky in how close these birds came to us and to be able to see them in their natural habitats is a magical experience. As we walked the beach a picturesque colony of Rockhoppers came into view. We could see rafts of them exiting the water, always in a rush, and making afterwards the seemingly long journey to their nests. Again another natural experience to just appreciate and wonder about as they climbed the rocks around us.

A bit more walking followed from this point, and many of us took the chance to climb a bit uphill. On the way we met some Megellanic penguins who were dispersed throughout the hills and almost mingling with the native sheep who were grazing away.

We had a mild ascent to a large colony of Rockhoppers who were as noisy and curious as you can imagine. They are such an interesting species and with their yellow ‘eyelashes’ they really do create intrigue. They seem a little cheeky, almost as if they are always up to a little mischief!! Some were nesting and minding eggs while others scrambled about on the rocks living up to their name. From this vantage point one really got an idea of the island and its size and position. It is situated off West Falkland and even though it was a cloudy afternoon we could see right across The Neck. Beautiful views from this point. You can see the beaches on both sides and spot the black and white dots throughout the island. There is some vegetation on the entrance to the beach which makes a nice visual. We continued the walk along the hilltop and then came to a colony of Black Browed Albatross, such majestic birds. They sit there on their extremely impressive constructed nests in colonies that seem so grand and vast. They frequently rise up and take flight and again we find ourselves watching them as they move through the air, often towards the ocean, and glide over the waves. There were two colonies close by with the second one being the larger. The nests are built with such skill and patience, and their owners look very content on their hillside homes.

After spending some time observing all of this wildlife, people began to drift apart again. Many dotted the landscape between the northern large sand beach and the neck itself on the way back to our landing site, all taking in the beauty of our surroundings. Not a bad start to the weekend I would say. As we started to leave the island we then had another ‘moment’ seeing the Europa sitting at anchor in the gentle rippling water. The sun was trying to break out from behind the clouds but it failed. However we all have to agree that our ship looks spectacular in any weather. We were greeted by the crew on our arrival, did the obligatory boot washing and made our way into the deckhouse for a drink and a snack. We had time to warm up and get out of our wet weather gear in time for this evening dinner of salmon, mashed potato and vegetables What a treat. Life is good and after 2 weeks onboard we realise what a great experience we are part of.