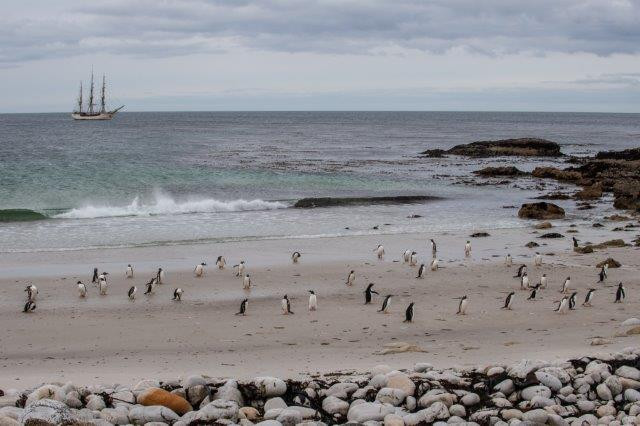 The anchor rattles shackle by shackle into the chain locker just before 04:00AM, and soon Europa is leaving the open bay South of the Neck at Saunders Island, heading towards the northern shores of the West Falklands.

About 50nm of good sailing led us to the third largest offshore island of Falklands, there, in Pebble Island, is where we plan our afternoon activities ashore.

From heaving anchor, throughout the early morning and until lunch time we enjoyed yet another great sailing journey, with 18 to 20kn of SSW-ly winds pulling our sails on a right course. Since departure, gradually canvas was being pulled up, and by the time breakfast was served Europa runs over the seas at 7kn with the Squares set up to Royals, Lower and Middle Staysails, Inner and Outer Jibs, Spanker and Gaff Top Sail.

We sailed all the way to the Eastern cliffs and pocket beaches of Pebble Island, starting to drop sails a couple of hours before lunch. Rounding Cape Tamar and half way from there to Tamar point is where we found good ground for anchoring.

Many were already aloft and in the Jibboom furling all sails but the Top Sails, left ready to be set again when we finish the planned outing ashore for the afternoon.

With the wind blowing from land and up to 20kn, and slight swell breaking over the shallow beaches of the area, our guides decided to take a boat and scout the chances for a good landingspot.

It all looked relatively well to land here, nevertheless they decide to wear dry suits to make the operation safer and dryer for all of us.

Soon after lunch we were all ready to set foot at Pebble Island, the third largest offshore island in the archipelago. It receives its name after the rare and attractive agate pebbles sometimes found in some of its beaches. The island has been owned by several families from 1846, when the settlement on the South coast was established. For many years Pebble island was one of the most important wool producers on West Falklands, and nowadays still holds about 10.000 heads in its livestock, that is completed by cattle and even a pig farm.

The place payed an important role also during 1982 Falklands War. It was first occupied by the Argentineans but soon after British Special Forces took back the control destroying 11 Argentine aircrafts based here.

And in such illustrious island is where we set foot, on the East side of a pocket sandy beach, leaving space on the other end of the shoreline for multitude of Gentoo penguins walking up and down their highways, to and from the sea.

A short stroll up the green hills, zigzagging through Magellanic penguin burrows, brought us to the edge of the spectacular cliffs that guard the East coast of the peninsula where we landed. Views from up top again were pretty dramatic and impressive. Which would be a better place for the Rockhopper penguins to gather together in rookeries? So, there they were, just on top of the rocky escarpments enjoying great views of the whole area and the Kelp filled seas underneath. Even a solitary Macaroni penguin was spotted hanging around its Rockhopper relatives. Even though this is a typical South Georgia species, a handful of individuals or nesting couples seem to be spread from Falklands to Antarctic Peninsula.

Tough there we found many Cormorant empty nests, the location it is not unnoticed by other interesting bird species. Skuas are spread over the several penguin rookeries trying to get a fresh egg, a Peregrine falcon glides over the edge of the cliffs and Night herons sit on the crag ledges. On the inland pastures at the background, cows graze in areas burrowed by Magellanic penguins.

Walking pass the coastal high cliffs, we moved over the vegetated levelled terrain towards the West, to have a look from a slightly higher ridge over the waters of the inner narrow bay that characterises the Southeastern-most tip of the island, called Ship Harbour. There Wrens were seen hanging from thin grass leaves, while small flocks of Banded plovers linger in the ground.

Now, just a short walk over the fields led us to the landing beach, were the lower tide than before, made for a somewhat more adventurous zodiac operation to return to the ship.

And straight away from being back on board, Captain and Mate start the preparations to heave anchor and start our way of about 70nm to our next destination.

Quickly zodiacs are hoisted on deck, and in the meantime already some hands were send aloft to unfurl all the sails that we previously stowed away at our arrival here a few hours ago.

A swift push of the engine helped to get on course while hands gather on deck to set them. TopSails, Top Gallants, Royals, and Courses are sheeted down, Jibs, Gaff Top Sail, Lower and Middle Staysails are hoisted, and off the Europa goes again, sailing Close-Hauled on Starboard tack, happily using the 20kn of SSW winds to get a good speed, escorted on her way by a pod of Commerson’s dolphins.

Leaving behind West Falkland, the Falkland Sound and Cape Dolphin, a couple of hours after dinner we got to sail along East Falkland Island, bracing even sharper to come up a bit more to the wind. All an all we enjoyed a great evening and night sailing our way to Volunteer Point.