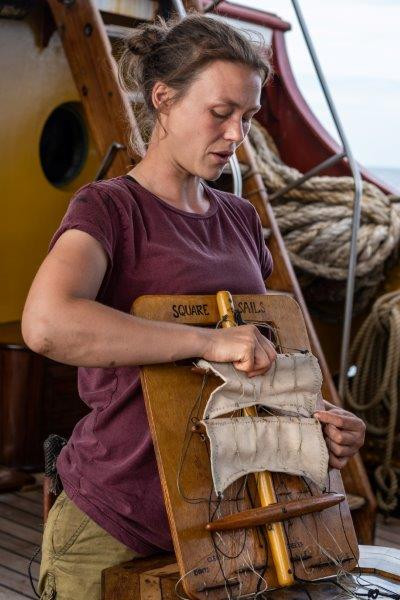 Typical tropical weather under blue skies, sunshine and calm conditions welcomed us to our departure day. While the mandatory Pilot boarded the ship to accompany us off the harbour, a couple more of the large cruise ships were already alongside or negotiating their way into hectic and crowded port of Montevideo.

Some of the Europa off-signing crew standing at the harbour, waved goodbye and cheered best wishes to us while the crew took off our moorings to start our adventure along the Atlantic South American coast.

Soon we found ourselves manoeuvring through the reduced space left between other large ships to get off the port, and once into the more open waters the Pilot was picked up and off we went on our own, along the muddy and sediment loaded waters of the huge Rio de la Plata. This large river system opens to the sea leaving shallow waters that extend for over 100nm offshore. 5 to 10 metres in depth will be below the quill for almost the rest of the day, and it will only gradually increase as the days at sea pass by and we gain more distance from such large estuary.

Nowadays, with the aid of accurate nautical charts, satellite positioning and modern depth sounders, it all makes for a safe navigation in the area, but things were different about 500 years ago, when Fernando de Magallanes ventured into those shallow and unknown waters of Rio de la Plata. With his fleet of 5 sailing ships he departed just like we did about a month ago, on the 19th of September 1519 from Southern Spain at the port of Sanlucar de Barrameda, after initiating their voyage 10 days before in Sevilla. Their voyage was about to be an adventurous quest in search for a coveted channel connecting the Atlantic and Pacific Oceans that would not involve the rounding of the Cape Horn treacherous waters. Despite our similar departures, today we already start our trip from Montevideo, while for them, the same date 500 year ago it was still a day at sea in the tropics, just a handful of days away from the Brazilian coast off Rio de Janeiro. It was not until mid January of the following year that his fleet made its way into Rio de la Plata.

For us, today’s windless and calm conditions make for the use of our engines to make progress, for them, a situation like this meant to sit and wait, barely sailing at any speed, desperately awaiting fair breeze to set sail and keep on their way.

Europa will try to follow a route close to the coast trying to avoid the Northwards strong Falkland Current, introducing cold Subantarctic waters up the Argentinean coast with a flow that can become pretty strong. Just about in this area is also where the Southwards flowing Brazilian current meet the former one, producing the steep changes on water temperature and oceanographic currents that can be expected on our way.

Our first day at sea kept developing on what was about to be a great journey, tough under light winds and hot weather. During the morning, one of the first things to be done was the mandatory safety talk and instructions conducted by our Mate Jelte. Soon afterwards the so called “Familiarizations” started. It was time to get introduced with the ship and our duties on board as “Voyage Crew”.

We were all grouped on our watches, red, blue and white, and crew members walked us all around the ship explaining safety equipment, deck work, lookout and steering. Tasks for all of us to fulfil while the Europa sails between the different areas that we plan to visit during the trip. Taking advantage of the great weather, this already also included climbing and furling-unfurling lessons.

Now we were ready to put everything in practice and in no time some joined the permanent crew to unfurl all squares up to Royals plus Middle and Upper Staysails, as the watch system for the Voyage Crew started.

For the moment the light N-ly breeze was just blowing between 5 to 10kn but a slight increase on the wind is expected.

Despite those easy conditions at the moment, when we sail between a High Pressure System to the North of us and a light Depression to the South, pulling all those ropes was our first real contact with Europa’s braces, buntlines, Crews, Sheets and Halyards. Soon many of us were hands on, after Merle explained a bit the functioning of the lines and sails, and under the supervision and instructions of the permanent crew. Like this, and after bracing a point sharper to Starboard tack we set all our square sails up to the Skysail. Gradually afterwards Middle Staysails, Mizzen and Gaff Topsail also come up together with our head rig.

On top of that, after the Ocean crossing the Europa just finished and with Falkalnd Islands ahead of us, crew is also busy with maintenance of the ship, replacing lines and getting our rubber boats ready. Named Zodiacs, they will be our means of transportation from ship to shore once we reach the islands.

The smooth motor-sailing went along until midnight, when we were hit by a couple of Squall lines, announced by professed lightning in the horizon.

Those showers passed over us with their associated rainfall and strong gusty winds, that made for swift sailhandling out on deck at the beginning of the new day.