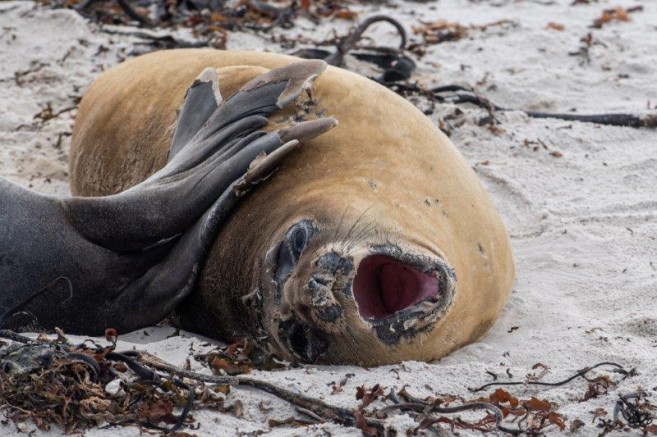 Holding anchor overnight in the good grounds off Bleaker Island, this morning it was to leave and face the seas one a WSW course, towards the only closeby area that offers relatively good shelter from the growing swells and strong winds to face during the next hours. The chosen anchorage for the afternoon is Bull Point, located in the southernmost area of North Arm, part of the main East Falkland Island.

Being just about 20nm from Bleaker Island, nevertheless it took the whole morning to cover that distance, as Europa had to brave over 30kn of headwinds and swells under her two engines. With all her canvas well stowed away, the only sail to be set was the Spanker, while the ship pitches and rolls over the seas for a few hours.

But what started looking like a day on board braving the harsh sea conditions, soon began to give a new impression of good chances for an afternoon visit ashore, as the ship approached the anchorage. Despite having low lands in front of us, they protect the little bay right at the tip of Bulls Point from the ocean swell, but the winds sweep over the flat landscape.

Three bells rang after our midday meal to inform about the plans for the following hours. With the ship at anchor over good holding sea bottom, the 25 to 30kn of wind and the short waves produced by it inside the bay, were not going to be a big problem to drop zodiacs and enjoy the afternoon on land.

In spite of that, the rides to the sandy beach were not going to be the driest ones, but the bit of water and splashes to suffer on our mile and a half drive where well worth, as the site proved to be a great spot.

From the southern tip of Bull Point a few miles northwards is located a large working sheep farm, extending over 215,000ha being one of the largest in Falklands. Named North Arm, was originally established in the early 1860s to run cattle before progressively turning to sheep. Bull Point was originally named for its purpose of holding the breeding bulls away from the main herd. More recently, Bull Point area was fenced off from sheep over 10 years ago to protect the biodiversity of the area.

As we already seen the landscapes of East Falklands and mostly here on the southernmost area are pretty different from the West coast that we visited a few days ago. East Falkland shows a large narrowing half way to its southern shores, named Darwin Isthmus, the entire area south of it is known as the low lands of Lafonia. Here the highest point is the Standing Man Hill at 94m. In comparison, the highest point of the Falklands is Mount Osborne at 705m.

The dominating vegetation of coastal sand beaches and dune fields, colonised by the Falkland white-grass, creates scenic wide, open plains. These, together with soaring cloud formations, provide a contrast of colours between sky and land.

The scenery at the spot where we set foot ashore is slightly more varied with its photogenic little cliffs, rocky and sandy beaches, several permanent ponds, green meadows and tussock stands. This coastal habitat is home for a fantastic range of wildlife. As soon as we were on land. Gentoo and Magellanic penguins seem surprised to meet us here, on such a spot usually not in the most touristic routes in Falklands, despite its beauty. They breed here together with Upland and Ruddy-headed geese. Down at the sandy beach also Flightless steamer ducks share the waters with Sea lions.

The plan for this afternoon hike was to walk a short distance across Bulls southernmost peninsula to have a look at the cliffs on its Western and exposed coast, open to the oceanic weather inclemencies. On our way we had a chance to stop for a while on one of the ponds present in the area. Actually Bull Point is an internationally recognised Important Bird Area, and also due to careful grazing management, a variety of rare and native plants thrive here. The route followed to reach the pond gave us the chance to spot again some more interesting bird life. Observations of Falkland pipits, Dark faced tyrants, Falkland snipes and the ever-present Banded plovers, preceded the sights of Chiloe widgeons and Silver teals, while above all of them, a couple of Crested caca-caras kept a sharp lookout over their grounds, looking for some prey or carcass to bring to their beaks.

Further across the small Bulls peninsula, down its Western cliffs, Kelp geese enjoy the rocky intertidal while perched above them in the cliffs, numerous Rock cormorants find ledges where to build their nests.

But for most of us, the highlight of this afternoon was to find a small group of young Elephant seals, laying down in one of the pocket boulder and pebble beaches that intersect the rocky escarpments of the area.

Born last season, some of them probably even two years old, they were on the moulting phase of their yearly cycle. Probably about two months ago, beach masters try to fight for their harems, establishing themselves afterwards and mating their females, while the recently born little elephants are still depending on them. It just takes about three weeks for them to become rather independent from their mothers. After the breeding period the adults need to recover energy and they go feeding at sea, moment that is eventually taken advantage of, for the young individuals to come ashore to the practically empty beaches, and overcome their annual moulting. Once they are finished, it will he the time for the adults to go through the same process.

Dark clouds were rushing over the steppe while we were having a look at such interesting animals, and soon the rain passed over us, followed by sunny spells, appropriate conditions for rainbows to show up.

Not far from the beach were the elephants rested, several Sea lions were seen too, on the rocky tidal area battered by the swell, home too for large kelp forests. Not far from there we reached the headland called Porpoise Point, where we could also see the small lighthouse structure that was erected in 1932, nowadays not in use anymore. At the distance, a King shag colony hangs over the further away cliffs.

At that point it was time to start our way back to be on time on board for yet another nice meal and the much expected Sinter Klaas party afterwards.

Three bells rang after dinner to gather everybody in the deckhouse. Traditional cookies were served, drinks were bought and presents for everybody were shared in a relaxed and joyful atmosphere. The same handicrafts that during the last week had many of us busy, trying our creativity working with the limited supplies available on board.