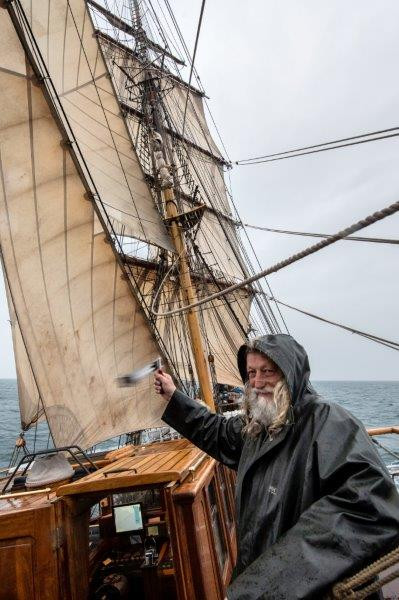 As we wake up to a new day, not much had changed since yesterday. Still the Europa meets head-on the SW steep and high swell, while winds keep blowing between 18 to 24kn from the same direction.

Overnight we kept the Lower Staysails, Mizzen Top Staysail, Jibs and Spanker, helping us to heel over starboard side while plunging into the early morning growing seas, with the current with us and the swell crashing against our bow.

While Europa puts up with those adverse conditions, the large amount of seabirds around us seem to enjoy the winds and foul weather. Amongst the heaps of the now so familiar to us Giant petrels, again a handful of the impressive Royal and Wandering albatrosses soar over the ocean swells close to the ship. Overshadowing the 2m wingspan of the Giant petrels, those albatrosses are the largest flying birds in the world, reaching 3.2 to 3.5m from tip to tip of their wings. Imposing as they are, for years they have been suffering a decrease in their numbers, together with the other species of large sea birds. Not so long ago many albatrosses and petrels were caught on the baited hooks in the long-line fisheries before those sank in the ocean to fish in the deep waters. Luckily, nowadays mitigation measures are put in practice and the numbers of birds caught on those hooks is declining. But still, as we are sailing at the edge between two water masses, the cold and northwards flowing Falkland Current, and the coastal Patagonian waters, the sheer contact area between both also produce frontal conditions increasing the marine productivity. Fact that not just attracts birds but also the fishing fleet. Clever as they can be, they check all the ships around expecting them might be one of those fishing boats.

The increase on the seabird numbers during the last couple of days can be related also to other several circumstances. First of all, we have strong enough wind for them to keep flying and gliding with not much trouble. As we sail along, we break the general windfield, creating an apparent wind that can be used by them for their gliding flight. Furthermore, as we advance over the water, we keep creating turbulence that can bring to surface any kind of nourishment that is a few metres deep. All those birds feed on surface and they are not really good divers, taking advantage of this process.

For them it seems easy to navigate the boundless oceans of the southern latitudes, catching the wind under their wings and gliding effortlessly over the large swells, always returning to their distant nests on mainland or remote islands that pepper the seas. But for human beings the vastness of the oceans always represented quite a problem to navigate and accurately position their vessels. Until nowadays when we go through the technological revolution and all that it implies, like modern digital instruments and satellite positioning. But in the past, as María explained today in her Historical Navigation Lecture, while transoceanic travel grew in significance, so did the importance of accurate and reliable navigation at sea. Scientists and navigators had been working on the problem of measuring longitude for a long time. While determining latitude was easy, early ocean navigators had to rely on dead reckoning to find longitude. This was particularly inaccurate on long voyages without sight of land and could sometimes lead to tragedy, as during the Scilly naval disaster of 1707 which claimed the lives of nearly 2000 sailors (even if nowadays recent investigations related the disaster with a problem with the latitude more than with the longitude). The measurement of longitude was indeed one of the most important discoveries for ocean seafarers and finding a method of determining longitude took centuries. Meanwhile latitude was calculated by observing with the astrolabe the altitude of the sun or of charted star above de horizon, longitude was much more harder to find, until John Harrison came up with accurate watches to be used at sea to compare the local time at a place with an absolute time, starting his first trials at sea in 1736. It took many more years and other clockmakers to come up with a useful pocket instrument based on Harrison firsts time-keeping machines.

For us is much easier in the present to know where in the world’s oceans we are located, to plot our course in the modern charts and work our routing based on reliable wind forecasts. Like that, by lunchtime Captain decided to change to Starboard tack, and steer on a more SW-ly course, when the wind veered from SW to WNW, blowing a good 20-22kn. A High-Pressure System in passing over us and we found ourselves on the west side of it, if lucky, this could give us some fair winds for a few hours later on, before the wind come back to WSW. But for the moment we kept motor-sailing like we did during the last couple of days. 133nm had been covered on that fashion during the last 24 hours, and after lunch barely 100nm are left to reach the entrance of the Straits of Magellan.

Later on, during the afternoon, the steep and tall swell start to abate, calmer waters are ahead of us as we get closer to the Southern South American shores. Gradually we are getting off the edge of the Falkland current flow and getting to the coastal calmer and slightly warmer waters. And as we go on, in the afternoon the wind started to veer to a fair N-ly 18-20kn, that allowed us to set canvas, turn engines off and finally enjoy again good sailing, where we all have our hearts set on!

Under the rainy conditions Top Sails first, then Courses and Top Gallants are sheeted down and hoisted, while warm smiles and lifted spirits show on the multi-coloured dressed crew and our salty Captain