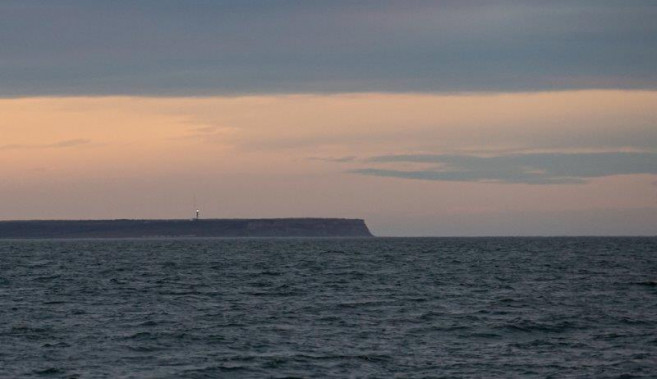 Good sailing hours last evening and night ended before dawn when it was time to start taking sails away, finishing clewing up the Squares by the change of watch at 04:00h.

While we pull clews and bunts a pod of Commerson’s dolphins welcome us to the Southern Chilean Patagonian coasts, following the ship in the dark, leaving behind trails of light produced by the bioluminescent plankton, mostly dinoflagellates. Their light is often informally called phosphorescence, because it is emitted when they are disturbed, but decays after a few seconds.

At dawn all the Squares re furled and from aloft, looking down below, we can still see playful Commerson’s speeding to catch up with us, then stopping seemingly to take a breath and then playing to overrun us again. Just a way to entertain themselves as they are much faster than the 5kn we were doing at the moment.

From then on, we motorsail under the Jibs, Middle and Lower Staysails and Spanker towards the entrance of the Straits of Magellan, on a weather that quickly seems to improve and rising temperatures.

The ones of us awake and up on deck, could already enjoy the first sights of the lowlands that characterises Tierra del Fuego, with great enjoyment to think we almost accomplish a great trip, sailing all the way from Montevideo and visiting the beautiful Falkland Islands. But sure with not as much thrill as the first Europeans here sure experienced as finding what it would become the Magellan Straits after Magellan’s fleet explored it and found it to be the long yearned for connection between the Atlantic and the yet unknown to them Pacific Ocean. When they first arrived to these coasts, they saw the many fires (fuego in Spanish) of the indigenous Yaghan, which were visible from the sea, reason why he named this land Tierra del Fuego. But nowadays the only fires we see when sailing those waters are the gases in flames escaping from the numerous oil rigs that drill into the Argentinean Continental Shelf.

Magellan also named the lands around as Patagonia. The origin for that name it will always remain a mystery but many think it refers to the so called Patagones, a mythical race of people supposed to be giants inhabiting the Southern tip of South America, and named by this same expedition after finding large footprints at the beaches of those latitudes. Since then, five centuries ago, it is assumed that it comes from “pata”, foot in English, thus Patagonia meaning the “land of the big footed”. Not just Magellan, but subsequent expeditions in this area too, from Sir Francis Drake in 1579 to John Byron in his world circumnavigation on 1766, reported giants or very tall native people in Patagonia. Most probably the indigenous met by all of them belonged to the Tehuelche ethnic group who were taller than the Europeans of the time.

Facing strong headwinds and growing swell we push our way to such illustrious lands, to the mouth of the Straits of Magellan, leaving our first sight of land, Cabo Vírgenes, at our Starboardside. This cape is the south-eastern tip of continental Argentina, and on account of Ferdinand Magellan reaching it on 21 October 1520, the feast day of Saint Ursula and the Eleven Thousand Virgins, he named the cape in their honour.

As we slowly make our way it is starting to be obvious that the wind and pretty wild seas are gonna make for an uncomfortable time at anchor at the “waiting area” in Possession Bay, for embarking pilots tomorrow.

In the meantime, all sails are stowed away, and the ship readied to face the harsh conditions of the anchorage, with blows between 20, 30 and up to 40kn straight off the Straits on our nose. Situation that seemed to have blown away a flock of Flamingos from their lagoons on land, spotted flying over our heads a couple of times.

Soon both our anchors go down with practically all the chain, and for a while the engines are stopped. Not for long as it is pretty clear that we will need them to keep our position until tomorrow. With big swells crashing against our bow and roaring winds sweeping over the rig, Europa behaves like she is in motion, fighting the adverse conditions. Waves wash the Fore decks and she pitches like during the last couple of days while approaching land.

Commemorating Magellan’s feat it was likely that we had to go through some struggles as it happened to his fleet. Actually, when they reached this very same area where we wrestle the characteristic Patagonian capricious weather today, a fierce storm hit his four ships. Two of them where at anchor at those same whereabouts as we are today, the other two were exploring deeper into the large channel they just had found. This eventually came up to be the Strait they were so eagerly looking for.

That was just the first of the many storms they had to endure in their enterprise along the Strait, soon realising that they were on what was about to become known as one of the world’s most terrific places for the sailors.

Also, for us it has been not easy today to hold our ground here, becoming apparent to our Captain that at some point something had gone wrong with our anchors. Mate, Bosun and rest of the crew on watch are called to heave Starboard anchor and be on Standby, and after picking up the 5 shackles used, what we saw gave us an unpleasant surprise. Port chain came up wrapped around Starboard anchor in a puzzling way. Not much could be done today about it as the waves regularly deep the bow of the ship, to let it surface again afterwards high up in quite wild pitching.

With the end of the sailing for the moment and with time ahead to wait here before resuming our way along the Magellan Straits, voyage crew celebrate the end of their sea-watches and like that many attended today’s talks by our guides and the Pub’s Quiz prepared by our bar tender Colette.

In the morning, and with the sun shining in an almost clear sky, María organised another lecture about celestial navigation, finishing with a sun sight competition with the sextant at the meridian passage. During her talk she explained again the main concepts of declination and hour angle to obtain the latitude and the longitude of the sun when sailing, then she taught how to accurately use the sextant. The voyage crew started shooting better and better until Ryan got the best altitude and won the contest; he pointed our position only with an interception of 2,2 nautical miles away from our gps position. Well done Ryan!

Later on, Jordi explained the research that has been conducted by Chilean institutions and scholars on the population of Humpback whales that feed in the Patagonian and the Antarctic waters at this time of the year.

With the anchors tangled 30 to 50 metres underwater, swells making the ship pitch as she was pushing against strong headwinds and our engines roaring to hold our ground, we end our day, expecting abating conditions for tomorrow and to get back in line on our way to Punta Arenas.