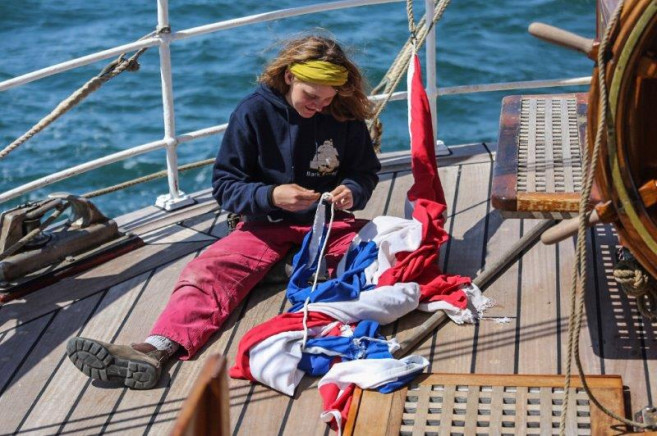 The rough seas and forceful winds lasted throughout the night. Despite what it felt and looked like stormy conditions, the skies offered a good starry display during the dark hours, and a sunny day afterwards.

The gradually abating winds and swell during the morning made for having a look at the anchor tangle situation about coffee time. By then the weather had considerably improved and the strong currents had changed now that the tide finished rising.

Crew had made plans for what was about to be a complex and daring operation to solve the issues with our anchors and chains. But first they had to have a look and assess the situation hoisting once more the Starboard anchor, which yesterday inexplicably had badly knotted around itself the Port anchor chain. For their great surprise, and after minutes of suspenseful looking how slowly but steadily the chain was emerging from the sea floor, the anchor itself came up clear and in perfect shape! How yesterday anchors and chains managed to jumble themselves on such a tricky way, and how today the whole thing solved itself, it will always remain yet another mystery of the Magellan Straits depths.

Plans for embarking the mandatory Chilean Pilots had already been delayed until the problem could be solved during the day, so our Captain quickly informed authorities, agents and pilots that we were already ready to go. He didn’t had to wait long for the reply, by 16:30h the pilots will be ready to join us, just a handful of miles ahead of our position, once we make our way through the last oil rigs set into the entrance of the Magellan Straits.

While all this was going on, the seas kept calming down and the winds continued to decrease. Now becoming manageable for the ship to remain in position with just one anchor down and no help from the engines. But after the battering suffered yesterday and last night, many were curious to check the computer screen up in the wheelhouse to see how demanding must have been for our Captain and Mate to keep the ship in position overnight. An anchor-watch sitting on two anchors and with both engines pushing forward, a challenging one we must say, far from the quiet nights many of us spent in the bridge while resting in some of the bays and calmer waters in Falklands. Then, being able to hoist anchors and resume our way along the Straits of Magellan, all was ready to pick up the mandatory Pilot that will bring us to Punta Arenas, motoring the last 100nm of the trip, on the now calm waters of the Magellan Straits.

By 16:30h Luis, an old pilot friend of the Europa, who is been already on board a couple of times in the past, embarked the ship. Meanwhile the crew was busy lowering on deck the Skysail Yards. They will not be needed for the next few months when, leaving the milder conditions of the lower latitudes, we will venture into the treacherous waters of the Drake Passage and Antarctica. Also new flags were prepared and hoisted, that will flutter on top of our masts while in Port. All preparations for the imminent arrival to the city of Punta Arenas, scheduled for tomorrow in the early morning. Time of arrival will depend on the capricious wind and sea conditions of the Strait, but surprisingly Europa push forward under her two engines reaching the good speed of 9 to even just about 12kn until late at night, having the current and tide with us. Quickly and under a beautiful sunset, we leave behind the so called First and Second Narrows, and change course more Southwards towards Punta Arenas, nowadays the Capital city of the Magellan region. After a long history of discoveries, famous navigations, adventures and misadventures since Magellan sailed through the Straits in 1520, it was not until 1843 that the Captain John Williams, English officer under Chilean contract on board the schooner Ancud, took possession of the Straits of Magellan in the name of the Republic of Chile and tried to build a colony. This first attempt of settling took place in Fuerte Bulnes, further South along the coast of what today is Punta Arenas. But in 1848 after further exploration of the zone it was decided to transfer the colony to a new location which offered better sheltered and improved live conditions. Eventually within a few decades the settlement, Punta Arenas, became a major commercial centre in Patagonia.

But we should not forget that this southern Patagonia Region was already inhabited by different ethnic groups, since the mind-blowing date of about 8000 years ago, with many thinking that the human history of the area could even go back to about 10000 years. Those dates had created controversy in the traditional scholar believes that the Americas where not colonised by humans until the end of the last glacial period about 13000 years ago, and that is starting by then in North America through the Bering Strait.

Leaving aside those historical debates, Europa seems happy to eat the miles left to reach her anchorage in front of the city, and already by 03:30h she is already in position to drop anchor in front of Punta Arenas. The view of the spread out city lights, tall buildings and shipping traffic represents a shocking welcome to civilisation after our sailing adventures and shared time with penguins and albatrosses.