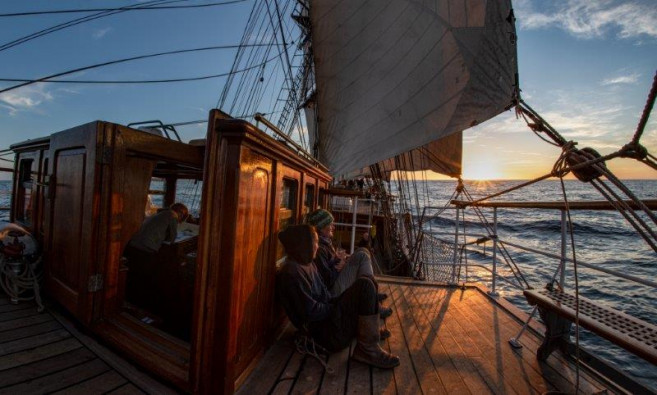 8 to 9kn of SSW-ly winds, blowing over a clear sky and another stunning sunrise, welcomed us to the new day. The breeze blew almost straight at our nouse, making for the use of our engines to keep a speed of about 4.5kn on a course parallel to the South American coast.

This bit of wind was enough for the Giant petrels, Great and Manx shearwaters to soar around in search of food, while Magellanic penguins surface on the relatively calm waters.

As the sunny morning went by, the wind kept turning, all the way 180º to start blowing from a NE-ly direction. Time for bracing square and start setting more canvas. By the end of the afternoon all the Squares were set together with the Spanker and Gaff Top sail on the Mizzen Mast and the Flying Jib on the bow-sprit. Under those increasing fair winds the engines were turned off and Europa makes her way South under sail at about 5kn, speeding up along the rest of the day as the winds picked up.

Sailing on higher latitudes some sails have already been replaced arriving to our last stop in Montevideo. Newer and heavier canvas substitute the thinner tropical sails, and today the large Outer jib used forth last trips was replaced for a smaller one, more adequate for what is to come during the next months in the rough Southern latitudes.

In between all the sailhandling, climbing, furling, unfurling and pulling ropes, there was still time enough for our guides to start their lecture program. In the morning, Maria gathered the ones interested on hearing about the historical context of our trip, framed in the stories of Magellan first circumnavigation. Not just that but also she talked about what kind of historical process were involved in Europe by that time. By the end of the 15th century, Portugal was already a big empire with its overseas colonies and factories, they had the power and the access to the precious spices, and Spain wanted also a piece of that. She explained how Portugal was developed from a small and poor nation to became one of the most powerful empires in less than 50 years. Only understanding the historical context we are available to understand the emergence of people like Magellan and the importance of his expedition for the Spanish empire.

Nothing was the same in Europe after the arrival of the Victoria, the only boat who survived to the circumnavigation. Men like Magellan first and Elcano taking over the ship after his death, changed completely the history of the world.

In the afternoon watch, Jordi talked about the seabirds of the South Atlantic, introducing their biology, life cycle, distribution and presenting some identification hints. That eventually helped to understand a bit better the many albatrosses, petrels and shearwaters have been seen since departure, sitting and waiting for the fair breeze when it was calm, or soaring around the ship in the windy situations.

Sailing, training and lecturing we spent most of the day, when after lunch our Captain Klaas informed us about our progress of 118nm in the last 24h. at an average speed of 4.9kn. So far we have done 269nm since departure, with 890nm stretching ahead of us. From our calm morning we were also informed that the wind was about to pick up quite a bit, changing direction between NNE, N, NW and eventually becoming even S-ly for tomorrow. But for the next hours and mostly during the night, once more passing squalls and showers are to be expected. Before that, NE-ly winds rose to 22kn while we gybed to steer on a 215º course, and pulled down the Flying Jib, replacing it by the Outer jib. And indeed, later on the conditions surely changed, when we hit the accurately announced stormy weather just after midnight, with the beginning of the new day.

Dark clouds and heavy lightning in the horizon announced busy night watches, as we sailed into the squalls produced by fresher and strong winds blowing from the Andes across the pampas towards the Atlantic.

It was time for starting to prepare the ship to endure a harsh night. Digital computer models can forecast and tell us much of what was about to happen with the weather, but we just can recall with apprehension how squalls and storms had to be braved in the old times when none of those forecasts existed. Sudden showers and scary thunderstorms accompanied by hard blowing and changing winds could terrorise sailors, as it happened about 500 years ago, when Magellan fleet ventured into this South American untravelled waters. On the 13th of February 1520, in virtually unexplored seas when they sailed just about the latitudes known today as the Roaring 40’s, as we do ourselves today, thunderstorm struck in their way. Dark clouds hovered over their heads and menacing storms obscured the horizon while the lightning fell over raging seas. Stronger storms than the ones we experienced during the night but produced nevertheless by the same meteorological effect. Their five wooden boats were battered and shaken to the point of damaging the quill of the Nao Victoria and many sailors lost their hopes. But then, as the winds and showers abated, the electrical phenomenon called Fuego San Telmo shone up in the masts of the leading ship of the fleet. Event that was at once considered as a good omen, enlightening their hearts again and convincing the crew that they were once more under God’s protection to keep going on their way into the unknown.

For us, things went better than that, but about 01:00 AM the first squalls crossed our course. General wind-field was NNW-ly but variable during the showers, and blowing over 30kn. Courses were clewed up at once, Royals and Top Gallants were taken away and furled. Inner Jib replaced the Outer Jib while the Upper Top-sails came also down. Under the increased winds sailing just with the Lower Topsails and Spanker, braces were pulled to Full-and-by Starboard tack, and the Europa braved the squalls still sailing at a speed of 5kn. As soon as the worst showers passed, it was time again to set more canvas, hoisting the Upper Top Sails, Fore Top Mast Staysail, and lower Staysails, with the smaller Aap over the main deck instead of the large Desmond. The situation gradually calmed down with the dawn of the new day, also keeping busy the early morning watches setting canvas once more under yet another gorgeous sunrise.