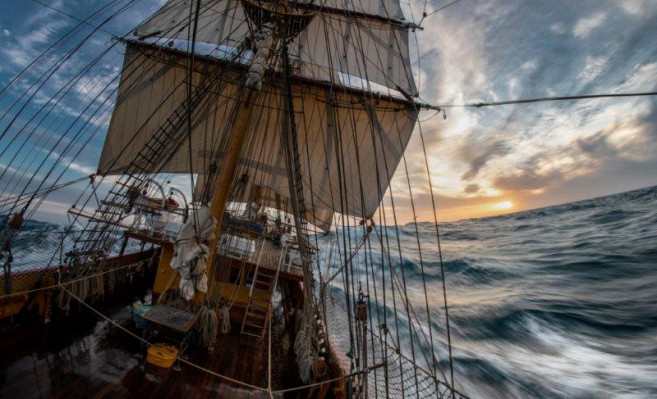 Clear skies during the night allowed for the ones awake to have great views of the starry heavens. With our engines turned off, Europa spend the dark hours sailing downwind over the calm seas and enjoying a fair breeze from our back of between 10 to 12kn. Under all the Squares, Fore Top Mast Staysail and the Mizzen sails set, we met the lovely sunrise sailing southbound. A couple of times, seemingly greeting us to the new day, small groups of Dusky dolphins show up now and then for short periods of time. During the day also Peale’s dolphins had been spotted, while above their heads several of the large Giant petrels fly, gliding over the low swells along with a handful of Black browed albatrosses.

As forecasted, during the morning the tail winds picked up to about 25kn, pulling us faster to our destination.

Not just the winds but also the swell from the North quickly grew up, and from noon onwards, after taking away and furling the Skysails, Europa experienced quite a good rolling. So far today was the first day in a rolling ship for many, making us to take more care and deliberation on all our movements around the Europa.

Special care must be taken at the wheel under those circumstances of having strong winds plus growing swells both from our back. Sailing downwind helming mistakes just increase the ship’s rolling, while taking water on deck over the railing, and are not so easy to correct. Nevertheless the speed of our progress was by then over 7kn reaching during the afternoon and evening peaks up to even 10kn. And not just this, but those fair winds are forecasted to stay with us for the next couple of days as we keep following the West flank of a High Pressure system. So far they helped us on doing 124nm during the last 24 hours, leaving behind 734nm since our start at Montevideo. All an all a good kick towards Falklands, today at midday just 390nm away from our current position at the moment.

And traditional positioning techniques indeed where today introduced. Once the voyage crew was already aware about the movement of the stars and the celestial sphere, Maria started with the basic concepts of the celestial navigation and the use of the Sextant. She explained how we can reach our location in the middle of the ocean with the sextant and the almanac. Today, leaving aside the wheelhouse GPS we will try to re-enact the mariners using the ancient science of position fixing through evaluating angular measurements between a celestial body (like the sun) and the horizon. Using these method it is possible to locate one’s position on the planet and the tool used as base for such calculations is the Sextant. The instrument represents a highly evolved reflecting device, that like others before, use mirrors to enhance their ability to make measurements. Permitting to observe two objects at the same time while measuring the angular distance between them. Its principles where already established by Isaac Newton but it was beginning to be implemented around the year 1730. After several trials and inventions such as Halley’s reflecting instrument, Newton reflecting quadrant and the octant, that used different angle scales, shapes, mirrors and materials, it was Admiral John Campbell who first came up with the idea from which the actual sextants are based upon. First manufactured by John Bird in 1759, since then, further developments in construction techniques and advanced materials had improved such instrument until the modern Sextants we use nowadays.

More complicated than many thought before, Celestial Navigation is a full schooling and practicing subject, to which nowadays not many are used to. Loosing all the romantic remembrance of the old times, the present times had gifted sailors with GPS, Radars accurate watches and even different types of compasses amongst other technological navigation instruments.

But not afraid of the difficulties, after Maria’s explanation everyone was excited to try to shoot the sun. Taking into account it was the first time for them with the sextant and we were in the middle of the roaring forties and on a rolling sailing ship, they reached to be pretty close to the meridian passage of the sun. Well done sailors!

With just the right amount of canvas set and steady winds from the aft, there was not much sailhandling to do in the afternoon, just gybing before dinner, leaving time enough for Jordi to repeat his talk on Penguins, where the general biology and the different species we might encounter during this trip were introduced.

As it happens, for the last days, and including this morning while the swells were still calm, Magellanic penguin small groups have been spotted now and then. And today, as the wind increased in the afternoon so it did the birdlife around the ship. Before sunset, Black browed albatrosses again glide close to the ship, together with Southern and even a Northern Royal albatross. Small flocks of Cape and a few Wilson storm petrels also show up, under the attentive look of countless Giant Petrels.