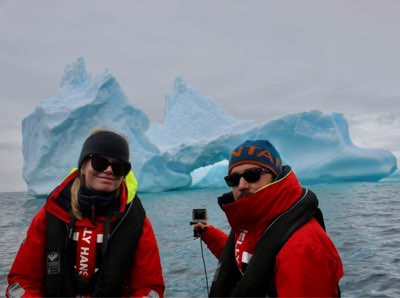 The day started with anticipation to launch our Nansen net as part of our krill research project with the British Antarctic Survey. The tall net is suspended far below the water line where it collects krill and other small Antarctic fauna. For the net to work properly the Europa had to be stationary in the water and so we moored in a small icy cove. We worked as a team to assemble the net; the design is true to the original nets used in the 1940s for monitoring krill levels and so assembly involved lots of knots and many brass shackles.

When it came to launching the next we worked with crew members Enguerrand and Beth to use one of the yards (the horizontal beams on the mast) to create a crane for lowering and raising the net. “10, 20 30…50 and 55” called Enguerrand as he watched the makings on the rope identifying the net depth. We took note of the global positioning, weather conditions, drift speed and sea floor depth before re-hoisting the Nansen net. As it came out the sample collector was removed and then sorted and mixed with formaldehyde preservative by Gen.

Meanwhile, in the library some other members of the ReQuest team were busy assembling the microscope we had onboard to examine our samples. We didn’t catch much—a single krill—but each result we get is data for the BAS to use to help them to understand the prevenance of krill around the Antarctic Peninsula and Southern Ocean. We look forward to more attempt over the rest of the voyage.

After another great lunch of soup and freshly baked brioche, it was time to take one of the Zodiac RIBs (rubber inflatable boats) around an ‘iceberg graveyard’ between Trinity and Spert Islands. The shallow waters and tightening passage trap large icebergs on the rocks leaving them to melt away. We cruised between pieces of ice towering into the sky that ranged from brilliant whites through turquoise to deep blues. It was a great place to start my project: using photogrammetry to scan the icebergs and create 3D computer models. In one little space between two rocky headlands we listened to the waters crashing through the cracks and voids of melted space within the bergs whilst the Antarctic turns flew chirped from their nests overhead broken by loud cracks in the ice.

Back on the Europa we spent the late evening cruising between bergy bits to Cierva Cove where the Berguet Glacier rolls off the Antarctic mainland down to the sea. The Sun cast a golden light over the icy mountains that stretched far back and high into the clouds above.