We sailed last afternoon and during the night our way to Puerto Williams in Navarino Island. Very early in the morning we leave behind the city of Ushuaia on our Port side, and before breakfast all sails are stowed away and we drop anchor in front of the southernmost town in the world, Puerto Williams. 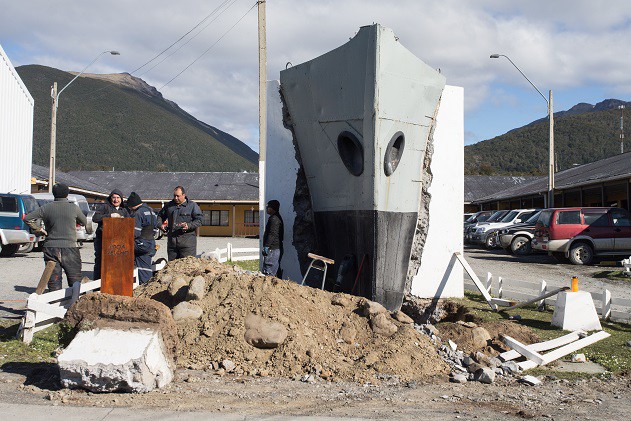 At that point we waited until 08:30h when the local pilot came on board and we got authorisation to do our moorings in the Navy pier where we plan to be until 15:00h and we will have to drop anchor until departure time. Even though the town is pretty close to Ushuaia, Puerto Williams and the whole Navarino Island get much less attention from tourists and visitors, remaining as the hidden pearl of Southern Patagonia. Anyway this small settlement is receiving income and subsidies during the last few years for its sustainable development, all in the frame of the Cape Horn Biosphere Reserve, from which the town is an important part. This figure of conservation of the environment is a UNECSO figure where the human population and its history is taken in account as part of the ecosystem.

The town was founded in 1953, as a Navy Base. Even nowadays out of the approximately 2000 inhabitants, half go them belongs to the Chilean Navy, and just live in the island for short periods of time before being sent to other destinations. But in fact the human population of the island dated all the way from 7500 years ago, when the Yamana or Yaghan natives started to live here, making the island the centre of their culture. Despite the harsh and inhospitable conditions those natives flourished and colonised the area, arriving with their canoes all the way to Cape Horn itself. Once the paperwork for receiving the ship in town was done, we could get off the ship and start the activities of the day. Transport was ready ashore to drive the group to the starting of the hiking trails choose for our morning hikes, along paths crossing areas of thick foresters areas, representative of the subantarctic ecosystems.

Almost all of us join those walks, while just a few decide to spend longer in town not climbing up the hills and valleys around. Once we reach this point, the group is split in two. Sarah took an easier walk along the valley of Cerro Robalo, while Jordi and doctor Leen took us up the top of Cerro Bandera. Both groups enjoyed the spectacular views and walks around the forests, mainly formed by three species of beech trees. At the lower height and along the water line the dominant forests are the evergreen Coigüe (Nothofagus betuloides) woods together with other species like Canelo (Drymis winteri) y Leña dura (Maytenus magellanica). Deep on land and getting higher over the hills, occupying well drained terrains we find the deciduous, high and straight Lengas (Nothofagus pumilio). And the swamps and high altitude areas are dominated by the smaller and also deciduous Ñirre (Nothofagus antarctica). Along the trunks of those species many tumours or callosities grow, originated as a defence against the parasitic fungus Indian’s Bread (Cytaria darwinii), used by the natives as a supplement for their diet that was mostly based on seafood Also, all the Sub-Polar and Polar regions in the world, specially the Patagonian area are very rich on non-vascular plant diversity. Hundreds of species of mosses and lichens cover the trees and the ground where we step.

The group leaded by Jordi went through the forest and finally reached the Alpine Habitat, over the tree level. Here the plant diversity change and the surroundings are dominated by grasses and cushion plants. The leisurely group, that walked along the Robalo River with Sarah, could also find several Beaver damps. Despite being so isolated, Cape Horn Archipelago Region has not escaped to one of the main causes of the loose on biodiversity nowadays: the introduction of alien-invasive species, like those beavers (Castor canadiensis), introduced in the 1950’s, and its population nowadays exploded exponentially. When we finished our walks, the transports to drive us to town were ready for us. There we got time to walk around this picturesque settlement and visit some of its attractions like the interesting museum, mostly about the native population and biodiversity of the area and the “Stirling House” located in front of it. This house was built as an Anglican Mission in 1906 in Rio Douglas (in the Western coast of Navarino Island), but finally closed and abandoned in 1917 due to the lack of yaghan natives. The number of members of this native group diminished dramatically in the modern times. Recently the “Stirling House” was brought to Puerto Williams and restored.

Next to the main square we could see the bow of the “Yelcho”, the chilean boat under the command of Piloto Pardo, that finally could reach Elephant Island and rescue the men belonging to the Imperial Transantarctic Expedition leaded by Ernest Shackleton, that were stranded there for more than four months after one of the most famous Antarctic stories of struggle for survival. While exploring the town, we could pass by the fishermen area, where we could see the small boats and fishing gear that they use to fish the most appreciated resource in the area, the king crabs or “Centolla”. The sustainability on use of the resources is essential in this island. The main marine resource is the mentioned King crab (Centolla), but also the ostión, hake, sea urchin and some algae species like the luga roja. Other places that attracted out attention were the Supermarket, local souvenir shop, post office and a restaurant where to enjoy a meal, coffee or cake and their wi-fi internet for last time in our trip.

At 15:00h the ship goes at anchor, and at 17:00h we are all on board, being picked up by the zodiacs. After an hour dealing with the Chilean authorities and ship’s paperwork, we can heave anchor and start our way along the Beagle Channel during the sunset, as several groups of Sooty shearwaters fly around accompanied by flocks of Cormorants and numerous Black browed albatrosses. Our goal for tomorrow morning is to try to land at Cape Horn itself.