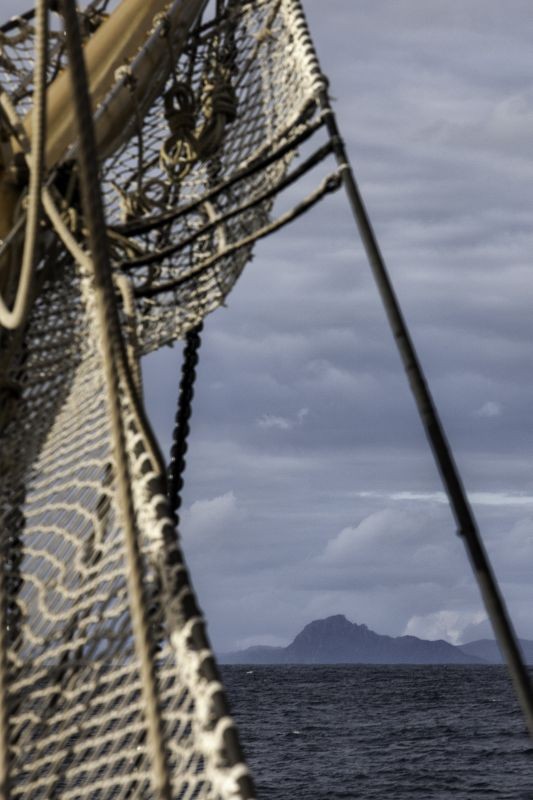 We are approaching Cape Horn, and wondering what is it that makes us so enthusiastic to see this rock. It is not the highest, most impressive mountain we ever saw; it does not have a snow-covered summit that rises above the clouds to touch the skies. Today the weather is nice and the rocky slopes of Cape Horn are bathing in sunlight. After the Drake Passage the Cape Horn seems quite inviting, a sunny piece of land in the horizon.

Cape Horn has a notorious reputation among the sailors. Many a ship and men were lost in these waters when the fury of the westerly winds that blow unobstructed around the Southern Hemisphere caught up with them. The masses of ocean water driven by the westerlies pushes between continents of Antarctica and South America making the current even faster here, and as if that was not enough, the Scotia ridge beneath forces the water masses to push through even a smaller gap.

The result of this is the roaring forties, the feared Cape Horn, tearing sails into strips and creating waves that roar on the deck, rushing back and forth knocking sailors off their feet, breaking wood and bones alike.

The men on the Wilkes expedition in 1840’s sailed past Cape Horn through the horrendous southern gales and after some years met a storm in Hawaii, up on the volcano Mauna Loa. The winds were so strong that their tents flew to the skies and strips of them were spread around on the mountain side. The sailors could not stand up because the wind would have made them fly away like the strips of tents, but spent hours lying flat on the mountain. The only thing to do was to keep up the sailors banter, shouting to each other over the storm that it is maybe not the strongest wind they ever saw, but they had not seen stronger, and that it is almost worse here than in Cape Horn!

And here we are, sun is setting, wind has dropped and even the continuous swell of the Drake Passage goes easy on us today. Right at this moment it doesn’t seem like one of the worst places in the world to sail to. But remembering the loss of life and beautiful vessels, remembering that this rock may have been the last piece of land that many sailors saw, Cape Horn will never be just another rock for seafarers.