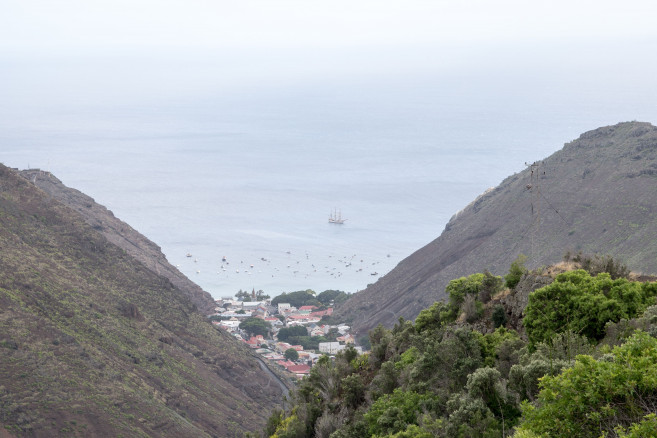 At sunrise on Monday 16th May 2022, the craggy slopes of St Helena filled our bathroom porthole as we made our final approach to the anchorage at James Bay.
The island's capital Jamestown is tucked neatly between steep, barren hills, and we spent the morning watching the locals going about their business ashore while we waited out our quarantine day.
Tantalising as it was to be so near to land yet unable to go ashore, we enjoyed a relaxing break from the watch schedule with a barbecue on deck in the evening.

After clearing a final Covid test the following morning, we climbed into the ship's zodiac (rubber speedboat) and rode ashore, taking a look back as we went to notice the elegant beauty of the small world we had been living on for the past two weeks, Europa dominating the small boats of the sunny harbour. A well-timed hop out of the zodiac and we were ashore on one of the world's most remote islands.
The pierhead is surprisingly basic, given it was for generations the only way anything or one reached the island, including Napoleon, who stepped ashore here for his final exile some 216 years ago.
I suppose it is testament to the remoteness of this place that its link to the outside world has remained so simple.

As we stroll through Jamestown, one thing is immediately apparent to all of us: the people here are exceedingly friendly and welcoming.
The town is bustling with people going about their business, but all stop to smile and say hello.
Jamestown is a working community at the hub of island culture and, while it possesses a simple gift shop and tourist office, almost all of the infrastructure here is for the island's permanent inhabitants, an indication that tourism is still yet to be a significant part of St Helena's economy, despite the recent opening of an airport.
There are a few humble cafes, a hotel and even a tiny prison here, currently hosting eighteen inmates according to the guard outside, but beyond the main street, there is little more than some houses and a road leading away.

Later in the day we took a tour around the island, visiting amongst other idyllic spots Napoleon's former residence at Longwood House, the new airport and the governor's residence at Plantation house, where we met Johnathan the tortoise, the world's oldest living land mammal.
Johnathan was resting on the front lawn and made only the slightest movement of his head as we tiptoed around him, though he can be forgiven for not putting on much of a show at 190 years old.
Driving further, we saw the vast diversity of landscapes the island has to offer.
Dark green tropical valleys give way to red rocky expanses and in almost every corner of the island one can find a few houses and a local shop.
Abandoned flax mills pay homage to lost industries of the past, demonstrating that as beautiful as the island may be, life on modern St Helena is not easy for the 4000 or so inhabitants.

After returning to Jamestown, the voyage crew gathered for dinner at Anne's Place, a restaurant in the grounds of the castle, before strolling up the street for a drink at the Standard and the White Horse Tavern, the town's two pubs, where we shared stories with the ever-charming locals, before heading back to the ship.

The following day allowed for a few more hours ashore before setting sail.
Leaving the anchorage presented us with some of the most engaging sailing yet, as all the voyage crew were on deck to set certain sails at specific moments to sail off the anchorage.
The manoeuvre requires first backing the foremast to effectively reverse around and point the bow away from the island and the wind, before bracing square and setting the rest of the square sails to pull forward and into the open ocean.
As St Helena shrank into the horizon, the galley presented a delicious chocolate cake and the crew sang on what was certainly the most remarkable and memorable birthday I have yet celebrated in my life.

Three cheers for the galley!