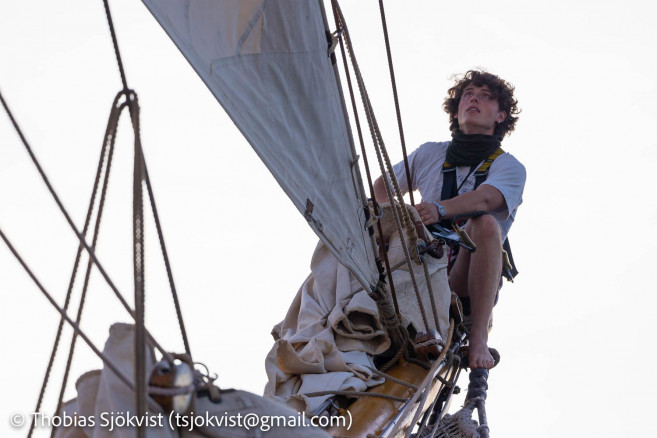 As the sun made her slow journey towards the Tropic of Cancer, we were hot on her heels, becoming more northerly at a faster rate, until we crossed the sun’s declination at 07:58 this morning. For us this means that the sun will now be seen in the south of the sky, where it had previously been in the north. The only consequences of this moment are that sun-sights (with a sextant) will be taken facing southwards and that Lenny, whose estimation of 06:01am was closest, has been awarded the ship’s European flag as a prize for his good (or lucky) calculations.

Just as the sun covers great distances across the earth’s surfaces by moving a fraction each day, Europa sails her routine ocean crossings covering thousands of miles without ever accelerating beyond jogging pace. Of course the sun is not actually moving, the earth is, but such literal astronomy is no use to the sailor trying to make sense of the sky’s ever changing celestial bodies from the surface of the earth.

Life on board remains ever busy and engaging. Jobs to do include replacing varnish, sewing new seams into sails, repairing old blocks, sextant sightings and navigation and of course handling the sails and steering the ship. Lectures by the captain have been on weather systems, the history of the square sail and story of Europa, while the mates, bosun and deckhands have delivered on more knots, sail handling and manoeuvring. We even learnt various sea shanties with Penny, and sang and played on deck together one evening after dinner. This volume of activities may give the impression that we are always working on board, but the truth is that much of our time is spent sharing stories, telling jokes and playing games, for there is no social media or TV, and time is always passed in the company of others.

After a week being pushed further northwest, the fabled easterly winds were finally with us yesterday to allow for a northerly heading, and with Horta at a bearing of 030, we are confident about our progress. A pair of tropicbirds have flown near us the past few days, and dolphins were sighted yesterday evening, but even in the absence of fleeting wildlife, the ocean feels alive, for we are entirely at the mercy of her winds and waves. We sail steady now, but even the best forecast cannot always predict when the winds may change, and we remain grateful every day they are in our favour.