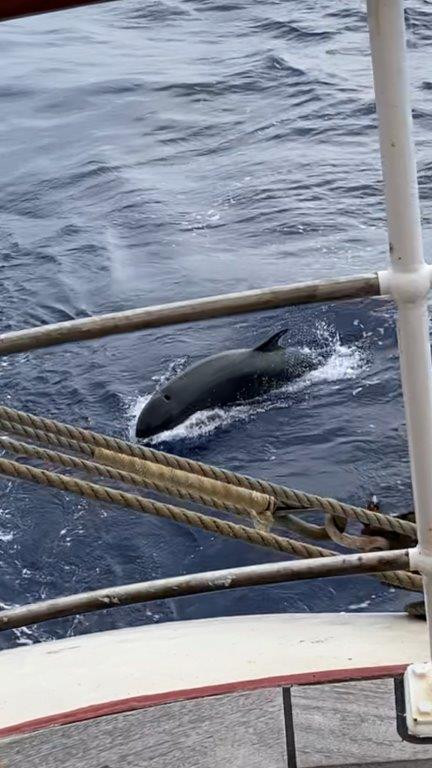 138nm sailed during the last 24 hours, leaving Rio de Janeiro 200nm at our Starboard and on similar weather conditions as yesterday (sun peering through the low clouds now and then, passing rain showers, stronger winds and growing seas) at the beginning of the afternoon Europa sails off the Tropics on her way South. Braced Close-hauled to Port tack, Squares up to the Top Gallants, Staysails up to the Middle ones, Spanker set and carrying just the Inner Jib and Fore Top Mast Staysail at the bow, she heels to Starboard sailing at a good speed crossing the Tropic of Capricorn. 23º 26’ the latitude that currently divides the Southern Temperate Zone to the South and the tropics to the North. Its Northern Hemisphere equivalent is the Tropic of Cancer, but this given geographical position for those great circles is not permanently fixed, drifting at a rate of about 15 metres per year due to the slight wobble in the Earth's longitudinal alignment relative to the plane in which the Earth orbits around the Sun.

And about to enter the temperate zones, we seem to be welcomed by a small pod of False Killer Whales that show up next to the aft of the ship. In a way they resemble the Orcas, but they are smaller, more uniformly black coloured with slender bodies and small rounded heads.

Observations use to involve pods of 10 to 20 individuals, but they are structured in larger schools consisting of hundreds of them. Despite their extensive oceanic range in tropical and warm temperate waters, they are not very usually spotted at sea, and most of what is known about them comes from stranding’s, sometimes in massive numbers or from fishermen reports of them feeding on their catch, pulling the fish off the hooks.

With the Brazilian coastline bending Westwards as we pass 140nm off Cabo de Frio, our course is leaving the shore contour and is aimed straight towards Rio de la Plata. Now we are sailing on an area where rougher and variable weather is expected, and with it we anticipate and prepare for more sailhandling too in shifting and stronger winds. Nevertheless, in the afternoon, the more stable winds after a couple of showers passed by, made for the Captain’s call to brace a bit more square and bring the tacks of the courses to the beam reach position, set the Royals and Outer Jib.

Here there’s increased chances of quick passing cold fronts advancing from over the Brazilian lands and developing clouds, showers and stormy blasts when reaching the ocean. Nowadays all this information is available on-line and the historical records tells us the probability of weather changes and meteorological phenomena happening in determined areas.

The Radar helps us to see the showers and squalls approaching from miles away. We can count on weather faxes and forecast digital files. Pilot Charts and books, first published in the 18 hundreds and kept up to date, explain the best way to follow during ocean passages out of the collection of countless observations and former sailing trips. Journeys including the times when the only instruments to forecast the weather would be a good intuition, keep a good eye on the seas and atmosphere, barometer and thermometer readings.

Modern sailors are spoilt. Christopher Columbus, Ferdinand Magellan, Marco Polo et al didn’t have pilot atlases with little arrows showing them the direction of prevailing currents, or hurricane tracks. Whilst most of their contemporaries didn’t sail more than a few miles from a coastline, the pioneers of maritime exploration set course to the perpendicular. They were sailing into the unknown with a guy up the mast instead of radar. Nowadays sailors have access to weather forecasts too, and can remain in contact with home via satellite at all times. Even in dangerous waters, far from land, sailors can know roughly what to expect and can be prepared.

Being prepared has always been sailors’ minds, and the best way to be prepared is to know what’s coming in the first place.

Thank you Jordi for all the news,