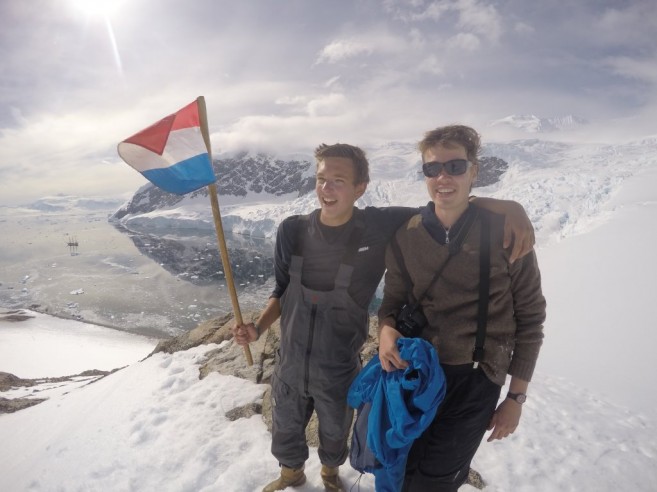 First landing of today was to Danco Island. There is a Gentoo penguin colony inhabiting the sides and the top of this round hill island. Jordi and Jeffry took most of the voyage crew for a walk up the hill to see the panoramic view and the rest stayed at the beach,enjoying the silence that was filled with surprising amount of Antarctic sound.

Firstly, the snow edge behind us was breaking up little by little. Summer is really coming: endless little streams of water were flowing from under the snow cover and dripping on the rocks. As the tide was withdrawing and the water support disappeared, the small melting ice blocks were breaking apart on the shore. The glacier on the other side of the strait was making familiar thunderous sounds, although it did not calve. Most fascinating sound however was the melting of the ice: some of the ice blocks made an eerie hissing sound, which I imagine comes from the little air bubbles within the ice, which have been under great pressure for who-knows-how-long and are now happily popping and releasing the air inside.

We continued our way through the scenic landscape and arrived to Neko harbour, which was breathtakingly beautiful in the afternoon sun. Calved ice bergs and smaller blocks were drifting around us. The glacier edge looked stunning and dangerous at the same time: Large cracks cut through the ice, filled with all shades of blue light. Smaller calving happened here and there causing small waves to cross the bay.

We landed on a rocky beach close to the penguin colonies and lifted all our possessions and life jackets high up on the snow in case a larger calving should cause an Antarctic ice-zunami on the beach. The rule goes: If the penguins are starting to walk away from the water, you follow the penguins because they know when to get out from the waves.

After this, the hole crew went to the top of the hill of Neko. At the picture you can see our proud crewmembers Pelle en Leander after reaching the hop.