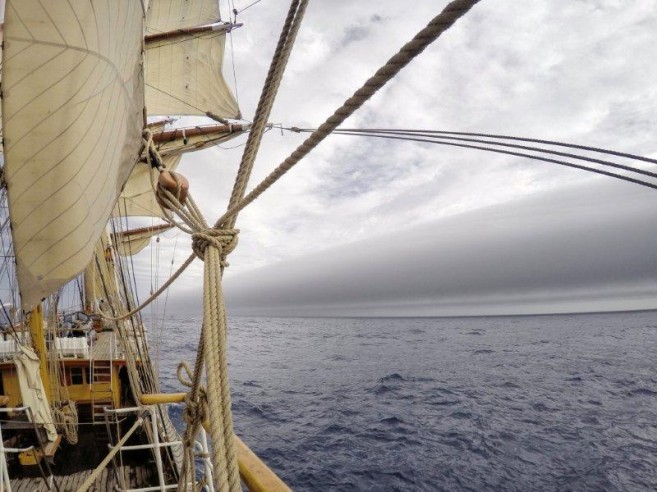 It's our second day on the Europa. Yesterday night we left the Beagle Channel to reach the open water called the Drake Passage.

The day had started very calm and sunny, but the wind increased in force throughout the day and reached 30-40 knots at the end of the channel. Dolphins, albatrosses, shearwaters and other seabirds seems to enjoy it as much as we did. But it did help to create our sea-legs and today very few people were sea sick.

we are on schedule

The eninges had been on for only a couple of hours during the night, but this morning we under sail again: nearly all canvas had been set to make use of the wind. During the 'white watch' we achieved a speed of around eleven knots, but in the afternoon the wind would gradually drop and slow us down. On average, however, we are on schedule. People who travel to Antarctica are often interested or concerned about climate change: is Antarctica melting? Have you seen changes in the last couple of years? We do not see too many changes, since there is anyway an annual fluctuation and we do not measure nor register glacier fronts or sea ice extend as we sail the peninsula area. But scientists do. Only a few months ago a huge iceberg broke free from the Pine Island Glacier, a bit further south of the West Antarctic Peninsula, in the Bellingshausen Sea. It was an event that scientist were expecting to happen, and NASA released satellite images which showed the iceberg drifting off in northerly direction. So yes, Antarctica is changing.

It's a paradox: all tourists fly to South America to board cruise ships to take them to Antarctica, thereby contributing to the CO2 output which helps to warm the globe, including Antarctica. If you love Antarctica, you maybe shouldn't travel there at all. But if you do, a sailing ship that uses the wind is maybe the more 'ecologcal' way to travel. On top of that, Europa gives a sense of what early explorers must have experienced. She reminds of other ships like the Belgica, Penola, Deutschland and all these other ships that braved the southern ocean. This immense Southern Ocean that supports all forms of life that we will see soon in Antarctica. This ocean is not just a few days of sailing to get to the white continent, it is part of Antarctica. Without this ocean Antarctica (as we know it) would not exist at all. Today the ocean has been benign and we enjoy being outside, setting sails and learning about sailing and wildlife. Let's see what tomorrow will bring. I am looking forward to it.