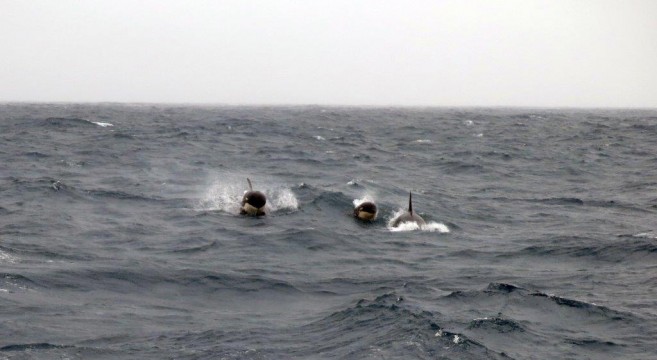 Dawn offered a beautiful sunrise over the still calm waters of the Drake Passage. Steering Northwards following the veering winds, the light W-ly breeze of 10kn help our sails and engines to carry on a good speed over 6kn. As the morning goes on, we find ourselves helming on a more Northeastward course in even a calmer area. With the wind already coming from the NW Courses are furled and not much later the rest of Square sails follow. Already under N-ly winds we change tack, now motor-sailing under Staysails and both sails set on the Mizzen Mast, that came along with cloudy skies and rainy weather and a marked increase on the wind. Under this conditions, and with a forecast of winds picking up, better prepare all for stormy weather well in advance. That meant double-sheet the staysails and head-rig and on the Main deck prepare the smaller Aap to be set instead of Desmond. And so it came, Drake started to show its moody face. Some of us have been eager to face it, others were happy enough with the so called Drake Lake. Independent from our desires, before lunch wind pick up from the NNE and sailhandling start again on deck, furthermore, as it looks in the prevision, will keep us busy for the next couple of days.

Gaff Topsail, Upper and Main Top Gallant Staysails are furled, and on that way we reached the time for our two o’clock daily meeting. There Captain Klaas told us that is just 240nm left to reach Cape Horn, while 126nm have been done during the last 24h.

During the day the barometer has been dropping and in the afternoon the wind started backing and gaining force again becoming NW-ly. Once more, after following this backing wind we change to Port tack at about 17:00h.

Since then, changeable weather and a Drake swept by several small but hot-tempered squalls, made us strike and set again Middle Staysails and Outer jib on several occasions. While getting the ship ready for the afternoon variable conditions and enduring one of those ill tempered showers, out of nowhere a group of tall fins show up. Cutting the breaking swell at high speed, the whale pod, amounting up to 15 individuals, is quickly identified as Killer whales, as they approach the ship. They show interest on our old lady Europa and the two persons furling the Outer Jib, riding the bouncing  bow-sprit at a close distance from them.

Unexpectedly the group of Killer whales paying us a visit are identified as the rare “D” type, with their extremely small post-ocular white eye patch distinctive feature and a more noticeably bulbous head than other types of orca.

Some observations of this distinctive morphotype have been sparkling the curiosity of other researchers since 2004. Leading to the publication in 2010 of a Scientific note describing this new type of Orca, based on 6 sightings in the open waters around the Antarctic continent, always in the vicinity of the Polar Front, plus old archive pictures from a 1955 stranding event in New Zealand.

Since then just a little handful of further sightings have been sporadically reported.

That indicates our incredible lucky shot of spotting this rare cetaceans twice during our trip. The first time they pay us a visit was close to our arrival at Elephant Island, further South and deeper into the Antarctic waters than their regular whereabouts. Today, right in the middle of the Drake Passage, where have been observed previously a couple of times. The first time in November 2009, when they showed up in the same area where we spotted them today, bewildering a surprised Jordi when he realised that they looked different from any other orca form it was described before.

Our first day in the Drake when it decided to show a bit its rough teeth, ended up on a gorgeous sunset, dying the skies with the warm light before dusk.