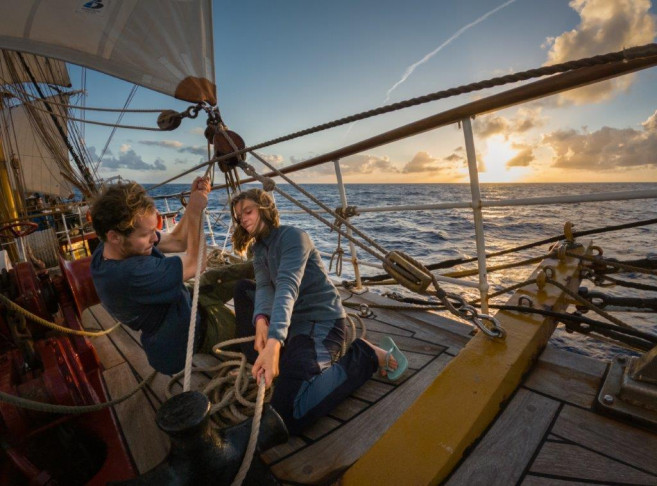 At sunrise, with the breeze turning to E by N and steadying, the yards are braced a bit sharper and the remaining canvas that was furled is readied and set. Like that, Upper staysails, Skysails and Flying Jib are added to the sail configuration and the Courses’ tacks are pulled tight in the new position.

Sailing under full canvas for the next hours, soon a loud shout from the lookouts brought to our attention a small pod of orcas in the distance. Several blows here and there didn’t make for a clear observation until a large male from the group showed up with his large triangular shaped dorsal fin, clearly visible amongst the swell.

Orcas are one of the most widespread cetaceans far and wide all the world’s oceans and most of the seas. But a closer look at them, their biology and habits, reveal differences that can be classified as different eco-types. Northern hemisphere killer whales can be categorised in three main groups, mostly depending on feeding habits, behaviour, communication, size of the pods and the areas they use to roam around, as Transient, Offshore and Resident. Sailing in the Southern hemisphere, the different types present here are called A, B, C and D, being the A type the most similar to the ones we can encounter in the north, and the ones we spotted today. B and C can be considered Antarctic Orcas, while the quite unknown and rare D type use open waters around the Subantarctic regions. The lucky ones amongst us which could make it in time on deck had a quick glimpse at them before they disappear in the distance.

By then, with the speed lowering down in easing winds, is decided to deploy the Manta Trawl and spend a couple of hours trawling to check for plastics present in this region, just about 175nm from the Brazilian beaches and at the western edge of the Mid Atlantic Gyre.

But as we are experiencing during the last few days, the stable weather conditions don’t use to last very long here, and soon we find ourselves one more time under rain showers and shifting winds. That made for the speed to rapidly increase while the trawling was still on the go. Mate quickly assess the situation and hands are called on deck to reduce sail. From top to bottom a couple of squares per mast come down, and the main course is also clewed up, while others pull on the downhauls of upper staysails and Flying Jib. After that the rest of samples can recollected without other incidents. Once the nets are on board, they are swiftly checked and filtered. Some of the plastics present on the sample can be seen at naked eye and already collected, the rest of the catch is stored and prepared for further examination under the microscope. The trawls come with not just the plastic bits and pieces useful for Regitze’s scientific project, but also with planktonic specimens. Today several small Portuguese Man o´war (Physalia physalis) individuals stand out. Beautiful and dangerous, despite looking like jellyfish, they actually belong to the strange order of the Siphonophorae, colonies of specialised individuals working together as a single organism.

A flotation structure which stretches upward on a biological parallel of a sail, provides them with the tools for buoyancy and sailing, to drift in the currents and winds over the ocean. From it, hang a variety of tentacles, some of them stinging and poisonous, others with movement and transport characteristics, all sweeping the surface waters for a catch to feed on.

Soon after lunch the interesting sample collection is put away, the Manta Trawl stowed in the Sloop deck and again permanent and voyage crew gather on deck to set sail. But still with hours to go until the end of the day, showers related with a rain frontal passage, show up in the evening catching up with us, making once more for furling Skysails and Flying Jib.

Under sail and good breeze, squalls and rain, setting and dousing canvas and trawling nets, our progress during the last day has been of 154nm on a good average course of 201º. Montevideo lays 1420nm ahead of us.