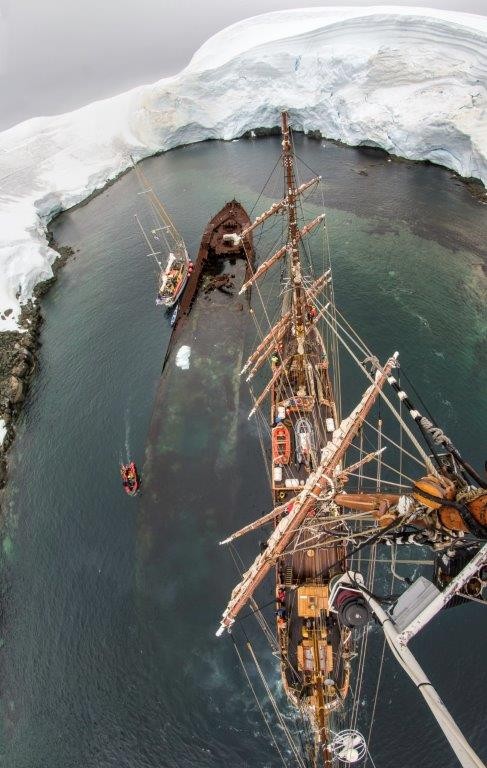 Cierva Cove offered a fantastic closure for yesterday. Sun set when we were amongst the brash ice and icebergs from recent calvings of the glaciers enclosing the cove. The deep waters and the large amount of drifting ice are not suitable circumstances to drop anchor, so we soon start our way southwards along the northern part of the Gerlache Strait. At midnight, getting closer to our destination for the day, engines stopped, and Europa quietly drifts for a few hours, timing our entrance to the Graham Passage for around 07:00h. Then it was time to venture into the scenic passage that separates Bluff Island from the W coast of Graham Land. Captain Skidsmo named it after his whale catcher Graham, which was the first to pass through it, on March 20, 1922. Even though it’s often clogged by ice, today we can make our way through without much difficulty. Luckily on this gloomy, cloudy and rainy morning just a few big icebergs are scattered around. Getting off the passage, still a couple of hours navigation are ahead, until reaching Enterprise Island where the whaling vessel “Gouvernøren” shipwrecked in 1915. There she lays, in a small inlet with her bow off the water and the rest of the hull submerged up to a depth of 20m. As we motor our way, we are surprised by a couple of Humpback whales spotted close to the ship. Skillful maneuvers lead to a great approach to the feeding animals, and soon we found ourselves turning the engines off and drifting to them. At that moment they seem to realize our presence, as they stop their feeding activity to come to the Europa for a close inspection. For a while they were swimming and diving right next to us, offering an unbelievable spectacle for all of us. Spy-hopping, showing their flukes and scrutinizing all the length of our hull they spent a good 20 minutes. Time enough for some of us to climb the rig and have a look at those magnificent animals from up the masts. Once sure it was just the old Bark Europa again sailing those waters, they resume their feeding, swimming away searching for the nutritious Krill, the base of their Antarctic diet. In a few more days the Humpback whales, now feeding in Antarctica, will start their annual migration North towards their breeding grounds. The individuals we see during this trip belong to what is known as the “G” population, breeding in the tropical waters of Colombia, Ecuador, Panama and Costa Rica, coming all the way to these high latitudes in the South for feeding. As they continue their activities, so do we, starting our engines again, heading towards the picturesque “Gouvernøren”, a sunken ship located in the little cove of the same name, indenting Enterprise Island. With its 1.5 miles in length, the island lays at the NE end of Nansen Island in Wilhelmina Bay. It was first charted by the Belgian Antarctic Expedition under Gerlache in 1898. The islands became well known to whalers operating in the area in the early 1900s. Enterprise Island takes its name commemorating the whaling enterprises in the area, that became a major center of summer industry during the period 1915-30, and the shipwreck lies there as a reminding witness of those times. Being a whale catcher/factory ship and loaded as she was with 16,000 barrels of whale oil, it was not possible to extinguish the fire that finally doomed her. Actually, the Captain got time enough to intentionally ground the ship in the little cove, saving his crew and part of the cargo, that were picked up by other vessels.

Captain Eric dealt with the wind blowing into the bay where she sits, and for a while he managed to steer the Europa alongside the wreckage, offering great photo opportunities from our decks or aloft. The sailing yacht “Ocean Tramp” was moored alongside the Gouvernøren. In fact, the cove offers good shelter and is normally used by small boats sailing these treacherous waters. Soon after waving farewell to the shipwreck and the crew of the yacht that came along for a short visit, we steer our ship into Wilhelmina Bay. There we encounter more Humpback whales. At the distance several blows are spotted but just following our intended track, two individuals lay side by side resting on the surface. A successful slow approach allowed all of us to get some more great pictures of them. After this other close encounter it was time to steam to Orne Harbour, where the afternoon landing is planned. Orne is a 1nm wide cove, indenting the W coast of Graham Land at the tip of Arctowsky Peninsula on the mainland of Antarctica, which was also discovered in 1898 by the Belgium Antarctic Expedition under Gerlache. The zodiacs left us ashore on a rocky outcrop that led to the conspicuous 285m high Spigot Peak.

For the first time we were leaving our footprints on the Antarctic continent itself, that welcomed us with windy and variable weather. A steep hike over slippery snow and loose rocks leads to a rocky ridge, home for a Chinstrap penguin rookery. The views from this high saddle are breathtaking. On one side Orne displays all its beauty, half filled with bergy bits and brash ice and surrounded by high cliffs and huge glaciers. At the other side of the ridge the scene shows the Gerlache Strait, the Errera Channel and its islands. Along the steep snow slopes, runs the long penguin highway used by the inhabitants of the rookery perched high on the mountain. All the snow slopes under the penguin colony are dyed by the colorful microscopic snow-algae that thrive at this time of the year on nutrient rich snowfields.

From up there, the views are stunning and over a large area, so they allow us to see more of Humpback whales that hang around this area, but suddenly many other smaller blows are spotted. Our guides just need a quick look to identify a pod of about 20 Orcas, swimming fast in a hunting formation. Seals and penguins shoot in all directions escaping from the formidable predators, and a Humpback whale seems to struggle a bit more to get rid of them as they get out of sight in the distance. A blizzard blowing over the high peaks announces a quick weather change and looking down towards Orne Harbor we see the field of brash ice closing up rapidly around our landing site. Time to start the descent to the coast again. Once there, we can see the boats battle their way in
the gusting winds and through the compacted brash ice to get to us. It took a while to get everybody back on board, but all enjoyed a spectacular ride amongst the ice to reach the ship. From then on, the Europa motors a short way to a good anchorage southwest of the neighboring Cuverville Island.