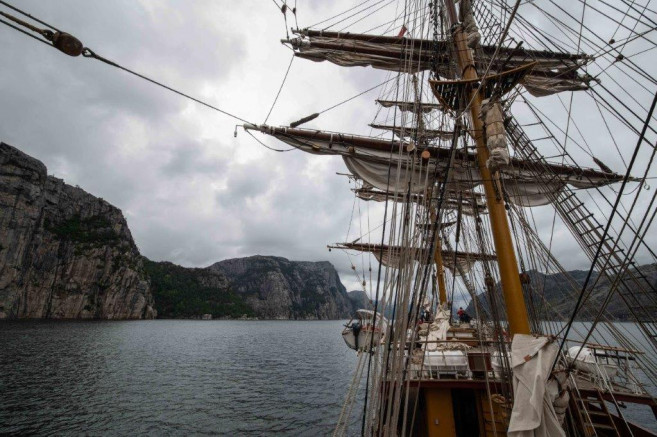 Stavanger had been our first visit to the Norwegian fjords and towns that pepper their shores; Lysefjord, the neighbour and famed inlet for its beauty and large cliffs is our next stop. By the morning coffee time, mooring lines were cast off and Europa started her way, first under engine, but it didn’t take long until canvas was set and motoring was not needed anymore. All square sails were sheeted down and Lower Staysails hauled to sail towards Lysefjord, where we arrived just before dinner.

Distinguished amongst the many fjords known by their wild and beautiful nature, it lays a few hours sailing from Stavanger, and represents a magnet for people visiting the area, searching for adventure and excitement. With its 42 km in length,  Lysefjord is the southernmost one in Western Norway and its home for several famous destinations, for example the viewing points of Kjerag and Preikestolen (the picturesque Pulpit rock), perched high above the waters over vertical cliffs reaching heights between 600 and 1000 m.

The striking geomorphology of the Norwegian fjords reveals erosion processes by the glaciers and their ice that are mostly related with the Quaternary geological period. Since the beginning of it, several Ice Ages contributed to carve them deep through the basement rocks. The first significant expansion of the Scandinavian ice sheet occurred at 2.57 Ma. The period between 2.57 to 1.2 Ma was dominated by constant glacial activity with small amplitudes between glacials and interglacials. After 1.2 Ma Scandinavia suffered larger glacial activity, and the last 0.6 Ma were characterised by short, but warm interglacials between significant colder periods. By then the Scandinavian ice sheets frequently reached the edge of the continental shel. The last glaciation period ended about  12.000 years ago, and its retreat revealed the spectacular “U” shaped valleys framed by steep cliffs that we know nowadays, with the sea filling the resulting valley floors. A beautiful example of all that is our destination for the evening, Lysefjord, entered via sailing under a hanging bridge, that represents the gate to the narrow waterway nested between high vertical cliffs. Low menacing clouds over the fjord added a mysterious touch to the amazing rugged landscape atmosphere. Not far from there, a pretty little bay offered a good anchorage for the night, with plans to heave anchor at mid morning and start our way back to Netherlands.