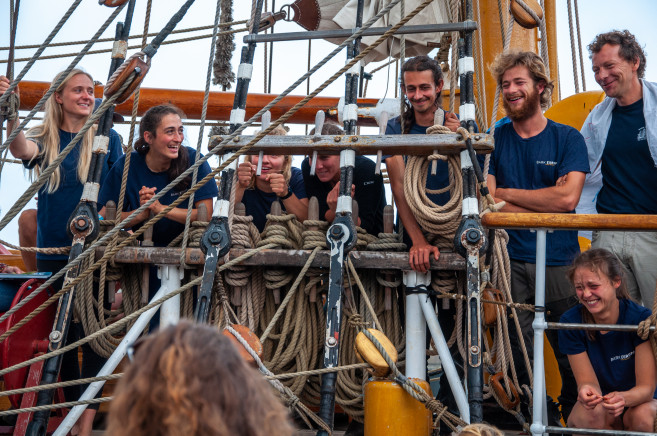 Lights in the horizon, lighthouses, landmarks, an increasing number of vessels around, digital charts and radar becoming crowded with ships and other symbols indicating from Missile training areas to underwater laying cables, buoys, radio chatter and depths coming up in the depthsounder as we approached the continental shelf after months sailing over the open ocean.

We are definitely out of the silent planet, out of the open expanses of the ocean. Human activity can be seen all around now, while motorsailing the last bit of the tempestuous waters of the North Atlantic and the surprisingly calm English Channel and North Sea, closing in on the Netherlands.

A couple of days of stormy seas led us to a more civilised and transformed world. In a mirror image of our long past days close to our departure from far South, the raging winds and big swells allowed for rough sailing until falling into the windless centre of a low pressure system, as a farewell to our unplanned ocean crossing. Then, sunny weather and light winds has made for the use of our engines, making our way along the crowded traffic separation schemes of the English Channel. All that, while coming from the solitude we enjoyed most of our trip, brings to some of us the happiness of the long sought arrival home; the
so called “civilisation” with announced welcoming activities, crowds, cities and social lives; for others though, it brings also images of a disappearing healthy planet, where the beauty of its natural world balance, both on land and in the oceans, seems to be fading. Mankind tries to copy these natural models seeking something stable to grab, to get a leverage point and achieve comfort. But in the modern society we seem to walk on the edge of risking working against those principles, accommodating the world to our ever-growing tendencies and interfering with the relationships within relationships that conform our living Earth.

COVID19, the infectious virus, is nevertheless also a component of the life force, a component of the diversity of life that in this case thrives inside our bodies, disrupting the stability and comfort of what we were used to. For us on board, our encounters with its effects has just been reduced to a short stand-by period in Ushuaia, while decisions were taken on what to do with ship and crew in a rapidly changing scenario of pandemic spread and countries lockdowns in response. The Europa shrugged since then, setting sail northbound. Our world has been focused on the life on board and sailing the ship as we progressed through a wide range of latitudes, with the associated changes in weather, winds, sea state and biodiversity.

From the cold and remote Antarctic waters we have made our way through a large variety of the Earth’s climate regions, Antarctic, Sub-Antarctic, Sub-tropical, Tropical, passing through the almost desert middle of the Atlantic (as the central parts of the oceans are) to the richer colder waters of the North Atlantic and coastal areas. Those climatic regions determine the biodiversity through evolutive trends that push wildlife adaptations to the changeable environment. Adaptations that translate into different distributions of morphs, sub-species and finally favouring full speciation. Mighty Albatrosses, a variety of Petrels and Hourglass dolphins were left behind in the cold Southern waters. As the temperature increased and we sailed to the Equatorial areas, countless Flying fish could be seen daily all around the ship and even some falling on our decks, pods
of Bottlenose and Spotted dolphins payed us several visits, sometimes accompanied by some tropical Brazilian coastal birds; the calms of the Doldrums brought us drifting seaweed and a multitude of Portuguese Man o´war. The waters closer to the Azores islands offered some good sights of a few Sperm whales and active Common dolphins that now and then have
accompanied us even until the last days of our journey. The North Atlantic and the proximity to European shores are home to the beautiful Northern gannets, fulmars and finally seagulls announcing land ahead. On several occasions along our way, long-distance companions have joined us for a while, the Arctic terns and Great shearwaters on their yearly migrations back and forth the North and South Atlantic.

And now, after all those experiences, for the last time together we gather on deck, after days, weeks, months sailing the ship along the Atlantic, setting and taking away sail in fair weather and in foul, and spending countless hours at the wheel. When all possible, nights and days have been dedicated to maintain, repair and embellish the ship as well, under the direction of our good boatswain.

So far, unless a ship meets with some accident, or comes upon the coast in the dead of winter, when work cannot be done upon the rigging, she is in her finest order at the end of the voyage.

… On the passage home, the fine weather between the tropics is spent putting the ship into the neatest order. No merchant vessel looks better than an Indiaman, or a Cape Horner, after a long voyage; and many Captains and Mates will stake their reputation for seamanship upon the appearance of their ship when she hauls into the dock.
´Two years before the Mast´  - Richard Henry Dana, Jr

Or at least we tried our best. From below decks to up aloft, during our journey crew has been replacing lines, gaskets, blocks, rust-busting, sanding, painting, varnishing, grinding, welding and whatever else was necessary and inside our possibilities on board. All until practically our arrival, when Europa’s old hull was cleaned, decks scrubbed and European and Captain’s flag hoisted high up main and fore Masts. At arrival, many gathered to welcome us, yachts and small boats at sea, old friends, family and crew at the port, all under the new regulations and social distancing that are so alien for all of us which have been
sailing for almost three months. Sure we are all looking more “salty” than when we started the trip, accustomed to the life on board, the time spent on deck and aloft, with toughened hands and ready to pull a rope, we approach the good port. Mooring lines ready, heaving lines just about to be thrown and gangway prepared on deck.

A turmoil of feelings hovers over us. Excitement aroused since the last part of the voyage, where many could just think and talk of barely anything else but arrival. How and when we will meet loved ones, enjoy welcoming meetings and media attention to be on the spotlight for a day, playing for a while being “sailing heroes”, go to their respective countries (tough seems not to be the easiest thing for all at the present) and their willingness to jump off the ship that has been home for the last months, enjoy again the commodities left ashore when embarked. Others seem to have eased those perceptions and eagerness, while getting closer and closer to our destination, tidying-up the ship, starting to pack belongings and getting ready to go ashore soon, walking back and forth the ship’s decks where we all shared many adventures and feelings during our journey. Those seek for tranquillity after a relative long period of isolation at sea, for which returning to this “new world” will take longer periods of adaptation. People who are sailing and working in faraway lands, seas and remote areas for a personal reason, and willing to show them to others that share some of the same interests and increase the awareness about the need to keep and preserve them. Sort of castaways from society, that enjoy ships like our old good Europa and show great appreciation for the separate reality that every trip, every crew and voyage crew create on board. Some already seem to miss their life at sea. Sure for all it will take time to digest the whole experience and get used to the new world to which we have arrived.

I must go down to the seas again, to the lonely sea and sky, and all I ask is a tall ship, and a star to steer her by; And the wheels kick and the wind’s song and the white sails shaking, And a grey mist on the seas face, and a grey dawn breaking.