A day with two different faces: the quiet morning sailing at approximately 4 knots with Studding sails on Port side under light breeze from the aft, and the other face in the afternoon, with a quick increase of the wind picking up to 22 knots, making us move around some sails and giving us speeds up to 9 knots. 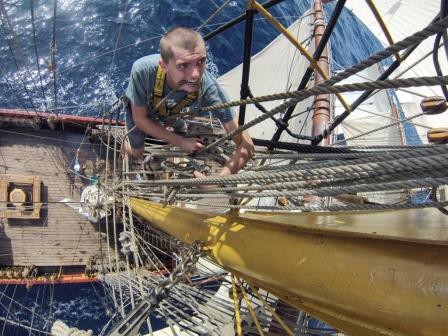 We completely entered the racing-sailing mode against the clock and the still distant Horn. From the afternoon on, the Europa finally enjoys the sailing conditions after last days of lethargy. During the morning, under light breeze and good conditions, and just experiencing a bit of rolling due to NE-ly swell of a couple of meters, several maintenance projects go on. Stitching some small rips on sails, re-leading some ropes up the rigging, painting jobs, block scraping and so on.

Afterwards in the afternoon as it gets windier the watch is busy on deck with sail handling, and taking the voyage crew around on another day of training. As we sail on, today we left behind the tropics, sailing over 24º S. Tropic of Capricorn (23º 27’ S) was crossed during the morning. In the Northern Hemisphere its parallel is the Tropic of Cancer, and the area between them are what we call “the tropics”. Those lines indicate each of two corresponding circles on the celestial sphere where the sun appears to turn after reaching its greatest declination, marking the northern and southern limits of the ecliptic.

Another albatross was sighted during the afternoon and we also had a visitor, taking a rest on board… what a nice parallelism to our downwind tropical sailing, spreading our “wings” to the breeze, while huge moth from the tropical Brazilian forests is found under the elephant table on deck. The species is unknown to us on board, (we don’t carry any butterfly books on board) but any contribution from you on that respect would be greatly appreciated!

On the sailing schooners, with their fore-aft rig, when sailing downwind the fore sails can be set in different tacks, giving the appearance of a butterfly, and so it’s called the sailing like this. On the square riggers this terminology is not used but can be used as analogy when setting Studdingsails on both port and starboard side.