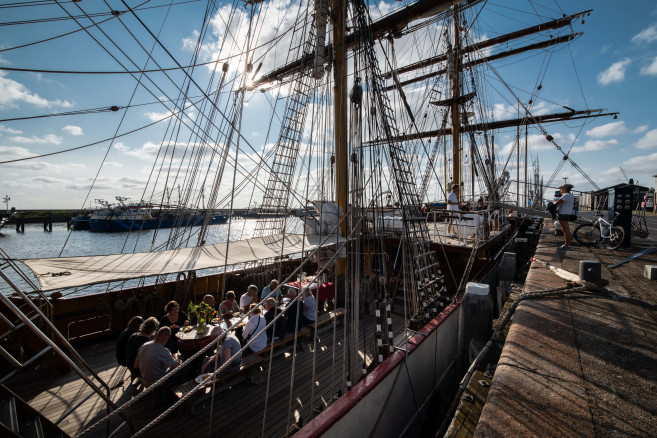 Over a year of maintenance, salty sailors, other crew members and volunteers, versed in the  ship’s life as they are, have been repairing, maintaining and running the vessel.Now, a new voyage crew together with the permanent crew are about to start a two weeks trip over the North Sea and Norwegian Coast!

A couple of weeks ago she already got her first experience with guests, as we sailed for seven days with a group of Frisian College students, a good way to restart activities, see the improvements done during the maintenance period and get the crew hands-on sailing once more.

Harlingen has been our port for the last months. This picturesque 15.000 residents town, has a long history of fisheries and trade that started in the 12th Century. A walk around reveals its heritage, with numerous historic warehouses framing the town’s centre crisscrossed by canals, that are home for a fleet of Dutch Flat Bottom  ships, fishing boats and modern pleasure crafts.

Close to our moorings, lays also a replica of one of the most famous vessels of the area, the wooden White Swan, used by the famed son of this Frisian lands Wilhelm Barentsz. On board her, he tried to penetrate the frozen waters of the northern seas and tried to find the North East Passage over the Russian Arctic. The ship eventually sunk off Nova Zemblacoast, and Barents lost his life during the expedition, but not before he claimed the discovery of Spitsbergen in 1596.

Europa, constructed around a centenary steel hull, shows herself at the background in a setting of fishing, cargo and historical vessels. Under sunny weather and in this framework, this afternoon she was all set to welcome voyage crew on board, after the crew made her ready from up aloft to below decks. Embarkation was followed by a Covid test, besides having to show prove of vaccination, trying to ensure a safe and enjoyable trip. From there we all settle up in the cabins and kept going with the regular procedures of check-in, done in the library by our Mate Sophie and later on a gathering on deck with Captain and the whole of the crew.

As a special purpose ship, after a good dinner on deck, our guests started to be already familiarised with the ship’s life and walked around the ship being introduced to safety equipment.

This morning the ship departed on high tide.