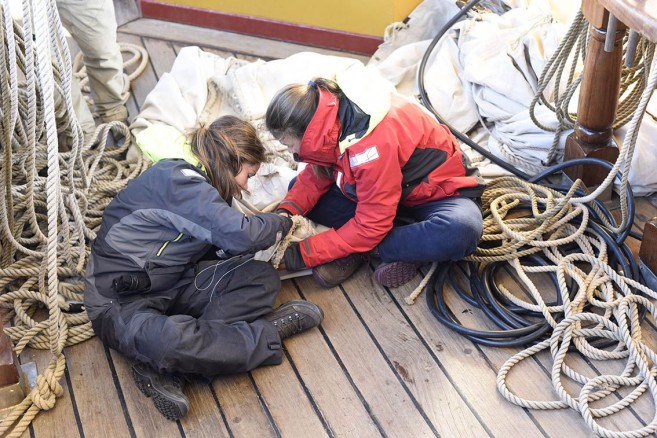 The early 20th century whalers named the place where we wake up today. They named it for it´s beauty, for the steep mountains and dynamic glaciers, often reflected by mirror like waters. On many days it is very calm in this well protected bay – just as today. The whalers named it Paradise Bay, ad it is not hard to understand why. There has been a lot of ice around all night, larger and smaller bits, making for some interesting watches. Now, breakfast has started, and a little past 8 we lower Blacky, Grey and Sloepie into the water, and start cruising towards Skontorp Cove.

We first pass the small Argentine station Almirante Brown. The original station was destroyed by a fire in 1984, probably set by one of the staff who desperately wanted to go home, but was left here for another winter. The rock around the station, and along the coast towards Skontorp Cove, is volcanic, and laced with bright blue green minerals along its cracks and inclusions. Green mosses and orange lichens at to the palette. We pass some cliffs where blue eyed shags are nesting. The chicks look quite big in their dark down feathers. We follow the coast, closer and closer to the glacier. There are many icebergs around, crabeater seals resting on some of them. At the end we are almost surrounded by glacier fronts, straight ahead, on port side and on starboard side the heavily crevassed walls of ice rise up from the water. Europa has sailed all the way into the bay as well, and here, between the icebergs, we switch groups. We slowly cruise the same way back – past the glaciers, the bare, colored rocks and the shags, after which we get everyone back on board.

We leave Paradise Bay, passing Lemaire Island and then motoring Eastwards into Andvord Bay. On the Eastern shore of this bay is a small Harbor, called Neko, after a floating whale factory ship that operated here. Just after lunch we drop anchor and are ready for anafternoon landing. This will be our first continental landing – the first time we set foot on land, and could theoretically walk on to the South Pole without crossing open water again. The site is overwhelming. The water is clear, there are many gentoo penguins on shore and we are close to a big glacier. From the landing site we start a walk up the hill. The bright sun and snow overexpose the landscape around us. Sometimes it seems impossible to look – still, it is even harder not to look. As we come up higher, we get a great view over the bay. Europa is anchored far below us – every now and then a minke or humpback whale is psotted around her, seemingly investigainge the ship. On the way up we pass a small hole in the snow, that shows us the glacier under us; a narrow but deep crevasse extends much further down then we can see. It makes us realize that we are actually walking on a glacier. When we reach our final point we are able to look onto the glacier front below us. We sit down here. Some for a while, some for a good while, and others hardly manage to get back. It is warm in the sun, calm, and sometimes silent. Down on the shore the first chicks are spotted. Finally! Many gentoos are still sitting on their eggs, but in several nests we can see and hear the small penguins. They are probably around a day and a half old; very small, but already able to hold their heads up.

Back on the shore we can see that the top sails are unfurled. Are we sailing out of Andvord Bay? There is a little more wind then during the morning. And indeed, back on board, we first hoist Blacky and Grey, and then continue with the sails. We sail out of Andvord Bay – with quite a nice speed, heading toward Wiencke Island. After a few hours, after dinner, suddenly – whales! We quickly take down the sails – a perfect exercise in sail handling, with many enthusiastic hands – and lower grey into teh water. About 45 minutes later the team returns, soaking wet and shivering cold – it was rather windy and choppy this time – but with another sample. Sails are taken up again, and we continue our way to Wiencke Island. Late in the bright night we drop anchor in Port Lockroy, with just two anchor watches left before breakfast.