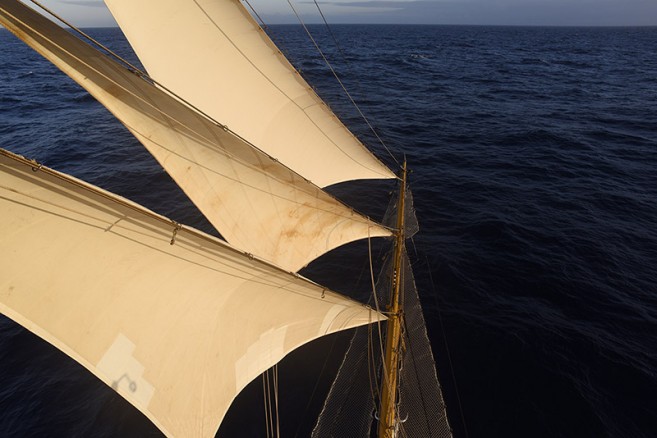 As always, reaching the open ocean, seasickness hits hard for those who have not been at sea for a while. Buckets are carried out from the deckhouse, conveniently cleaned in the scuppers as the waves are splashing over deck. Panic inside arises when the buckets all seem to be stuck together, impossible to separate and in this way only providing security for one person. Yes, the night is a little rough, but during the day the movement calms down. Instead of using alarm clocks, which will definitely wake up all our cabin mates, we have the habit of waking up each other. This morning our cook Rensje woke up the Port watch with the following words: 'Matthew, Sarah, Good morning! It is beautiful weather, it is a Paradise Drake!’. And it is true, to be able to cross the Drake like this is Paradise, especially for the crew that just last week was still heading against the wind for 5 days in a row, on the same stretch of ocean. We are lucky this time. Calm weather also means that more people are able to attend the watches. During the morning we have an introduction to square sails by Adam in the deckhouse. After we set the remaining sails
– with the upper staysails and the gaff topsail up we are now under full sail. After everything has been set and all the lines are back in place, Sarah gives a lecture about seabirds down in the lounge. As we are chatting a bit after the lecture, we suddenly spot something unexpected. Through the porthole we see a small sailing vessel passing by! Well, we see a set of sails passing by; the hull is almost invisible behind the waves. It is the Maltese flagged Rusarc Aurora – a boat that sailed around the world against the wind twice. We overtook her last night, being faster in stronger winds, she is overtaking us now, sailing faster
in lighter winds. After lunch the lecture on Square sails is repeated for the other watch and later in the afternoon Belèn tells us about whale sightings and how we can record data on our voyage. Bark Europa visits similar areas in the far South each year, covering large distances, and we can make a contribution to science by noting down and reporting our sightings of whales and dolphins. At our 8 0´clocky Eric points at an empty spot on the chart, and reveals we have covered 177 miles since yesterday. With an average speed of more than 7.5 knots we are doing well. Our heading and our course over ground are now almost the same – we are no longer pushed eastwards by the strong current. The depth is about 3700 m, water temperatures still quite warm at around 5-6 degrees. We are almost halfway to the next bit of land, 303 miles to go.