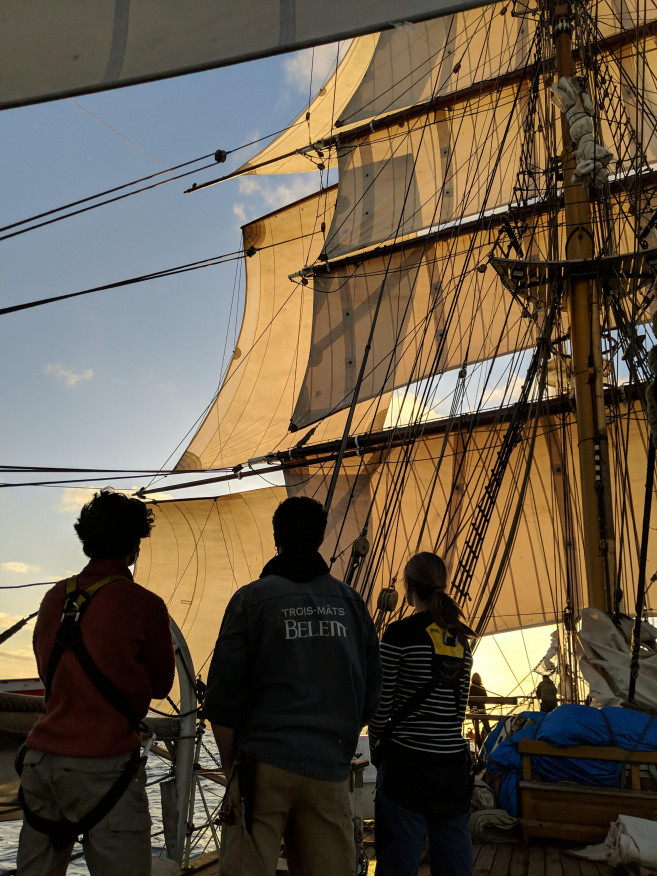 51 days and 6000 nautical miles, 31 pieces of sail and 250 lines, two remote islands and 72 degrees of latitude covered. There are many numbers one can take away from such an immense voyage and perhaps the most important, I have not yet mentioned: 34. Every joke, every question, every story, struggle and  smile, was shared with the 34 people and one dog that I had the pleasure of crewing Europa with for almost two months. There was never a boring day in the company of such a diverse and entertaining bunch, and just when we thought we knew everything about each other, there was always another surprise.

In the last week of sailing, we traded and busked at the voyage flea market, and tested our knowledge at the pub quiz, before dolphins guided us in the last few miles. The lookouts stared eagerly through the morning fog, and a bittersweet "land ho" was called when the conical silhouette of Pico loomed, soon to signal the end of our time at sea. After a night on anchor, we came alongside in Horta to spend one more night aboard before saying our goodbyes and stepping ashore on Thursday morning. Taking a look back at the permanent crew left aboard, I think again at how lucky I have been. Between Captain Klaas, Penny and Ninja, the deckies, engineers, cooks and doctor (who all deserve to be named too), everything about Europa is known. The graciousness with which this knowledge was shared is testament to the good will of all those aboard, their patience, and shared love for the Ocean Wanderer.

In Horta, many stories were shared in Peter's Cafe Sport, a long-established haven for sailors. Devon and Nils even found yachts in need of crews, and boarded boats for France (or Germany) and Ireland respectively, to start their next adventures. As we laugh and relax ashore, Europa stands gracefully along the harbour quay, her flags fluttering and crew muttering, calling for sailors to join her for the final leg home to the Netherlands. I will see the ship again some day; I cannot bear the thought that I may not.

While wind filled our sails, good humour and kindness filled our hearts. I shall never forget the friends I made, nor let good memories fade. And to the next crew: fair winds and following seas - may the ocean be as welcoming to you as it was to me. I was only a part of Europa for 53 days, but she will always be a part of me.