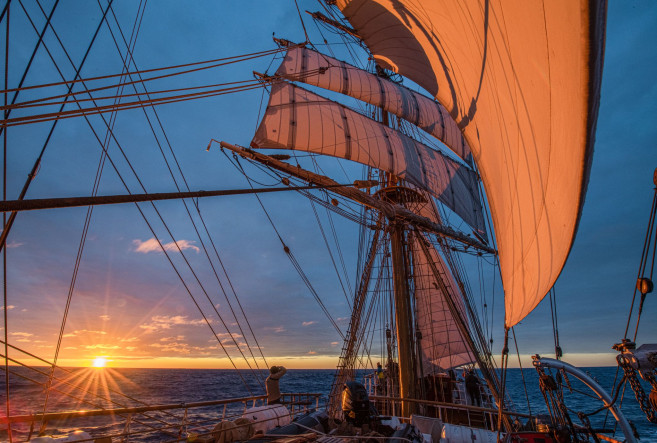 As our good ship Europa is making its way north again, we have also been following more closely on the regular sea surface water temperatures recorded by the bridge. We are now in the middle of the famous Drake Passage, and havebeen passing the Antarctic Convergence, a zone of about 25 nautical miles width, that also displays some seasonal and regional variability. But its main characteristic, a pronounced change in sea surface temperature from an average of 2.8° C south of the Convergence to 5.6° C north of this boundary, is what we were looking for today.

The transition of this Convergence is often accompanied by an area of fog, but not this time, as we got extremely lucky for this part of our passage and could enjoy clear and sunny skies, even though the wind disappeared, forcing us to awaken the twin Caterpillars again.

1. We crossed the 60th parallel, commonly used as the border of the Antarctic Treaty as well as of the Southern Ocean

2. We crossed the Antarctic Convergence,

3. We even managed to cross from the Atlantic sector into the Pacific sector at the same time!

As with many of these definitions, there are some conflicting sources, but we choose to again stick with those formulated by the International Hydrographic Organization, which both defined the Southern Ocean in the version that we adopt for this log, as well as this Pacific-Atlantic border, as the meridian passing through Cape Hoorn at 67° 16’ W. So, we could now claim to have sailed on three of the World’s Oceans, all in one voyage!

But coming back to the term Convergence, it is worth to remember that if there is such a thing as this mixing zone where different bodies of water meet and overlap, seemingly in the middle of nowhere, there must be a driving force behind this, and this is in fact found, further south still, in the Antarctic Divergence, which is formed by the topography of the Antarctic coastline and driven by the Antarctic Continental Current, or East-Wind Drift.

This Antarctic Continental Current is a weaker but important counterforce to the Antarctic Circumpolar Current, or West-Wind Drift. The extension of the Antarctic Peninsula northwards forces this East-Wind Drift northwards, where it meets its westbound counterpart, and the result of this is the Weddell Sea Gyre, which to some extent retains the icebergs and sea ice formed in the Weddell Sea, before releasing them into the Southern Scotia Sea.

Looking back at our voyage in this context, we can now anchor our experiences with the days of steaming into headwinds on our way south from South Georgia towards the Peninsula in our knowledge of the Antarctic Circumpolar Current, and can explain those bands of brash ice, bergy bits and icebergs east of Elephant Island with the Weddell Sea Gyre, and this very enjoyable, warm and sunny day in the Drake to the triple achievement of leaving the Southern Ocean, entering the Pacific, and crossing the Antarctic Convergence – quite a good day at the office, really!