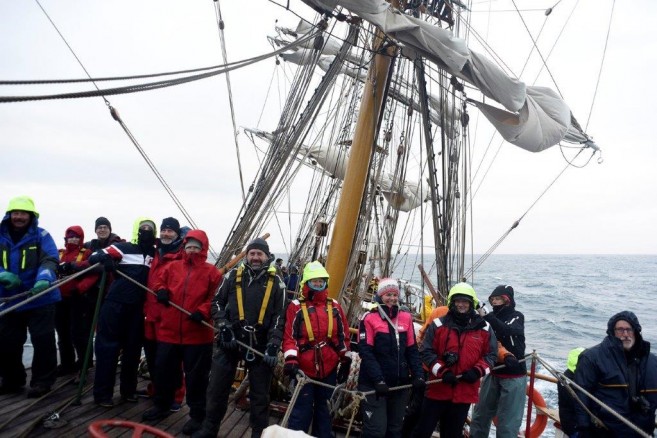 There's something to be said about a group of people in 2019 willingly choosing to sail a ship more than 100 years old across the most dangerous sea in the world. To some it's ambitious, to others foolhardy, but to the voyagers and crew of the Bark Europa it's the only way to do it.

While most have come to see Antarctica, I have also come to see the Drake. To me it was always a sea of legends and tall tales. Something I always heard about- but never dreamed I would see.

If you were to ask me to describe the Drake all I could say is this: You know that feeling you get on a rollercoaster as it pitches from the precipice, slowing going over the top pulling your stomach into a knot that sinks down into your gut? It's that. But there are no seatbelts, you're standing up the whole time...and it lasts for four days. You're also expected to eat, shower, and function like a normal human on this hellscape of a rollercoaster that with each passing second is feeling more and more like a personal torture device designed to test every bit of will you have left.

Despite all of this I found myself in a state of eerie serenity.

Before I left for the Europa, I met a woman in Ushuaia. She had just returned from Antarctica on a small boat and she told me something that I will never forget. She said that right before the Drake she had a waking dream, a vision- or whatever you might call it- she said she saw impossible things...and that if you let it the Drake will change you. I listened, but perhaps something in my expression told her I was less than believing. She laughed as she rested a hand on my shoulder and said "you will see..."

I took her words and filed them away in the endless list of stories and fairytales I heard surrounding the Drake and thought nothing more of it.

The following day I boarded the Europa and threw myself into learning everything I possibly could about sailing this incredible ship. We were shown the basics of rope handling, split into watches and informed by the captain of what to expect in the days to come. I was elected leader of white watch, and that night we were assigned the midnight to 4am shift. The dogwatch.

I gulped down a ginger tea and accompanied it with two ginger supplements- just to be sure- and willed myself to sleep- the gentle lapping of the waves against the hull of the ship serving as a sailor's lullaby.

That night, I dreamt of a night sky. I saw the moon first, shrouded in clouds and not quite full... I saw constellations, at first stationary- then spinning as I was transported into the endless night. Suddenly, stars and galaxies were all flashing before me at a dizzying pace, it was infinite and overwhelming- it felt like I was staring into the eyes of the universe.

"Kat...Kat! Your watch is up." In the darkness of the cabin I made out the flashlight of one of the members of red watch. It was only at that moment that I realized my eyes had been open the whole time- I wasn't dreaming at all. Dazed, I nodded, as the whole scene slowly closed in on me. The ship was rocking at an incredible angle, and a chorus of wretching echoed loudly through the halls, adding to the disturbing groans of the Europa as the waves crashed violently above us.

I tumbled out of my bunk and pressed myself up against one of the walls as I desparatetly tried to thwart all attempts by Posideon to fling me helplessly about the cabin as I dressed. I donned my harness before realizing all the watertight doors were sealed completely to prevent the cabins below from overflowing with water- all watches were to report to the wheelhouse before taking their positions on the helm- as it was too dangerous to go directly on deck. My shift was first, midnight at the helm. I clumsily staggered to the end of the corridor and pulled myself up the staircase of the wheelhouse where seasick passengers were wretching into buckets.

At the top, Bill, leader of Red Watch and retired British Royal Navy shouted over the wind and waves as it tried to drown him out.

"Kat! You're going to need someone experienced at the helm! Who's on?"

His eyes widened. I was no secret I had almost no experience. I hadn't had time to have a few practice turns helming in the Beagle Channel, hell, I've never even been sailing for longer than a few hours! "Talk to the crew!"

"Will do!" I replied as I braced myself to clip on to one of the safety lines erected to prevent any of the crew from being knocked overboard into the deadly waters below.

What I saw next I can only describe as beautiful chaos.

Full sails against a midnight sky...waves plowing across the main deck of the ship, the Europa heaving up and down with each pass, the permanent crew stoic and focused as if it were nothing more than a lazy river at a waterpark. Having never spent more than a day on a sailing ship, there were times when the ship would tilt at what seemed like an impossible angle- where I was sure we were going to lose her- but then she would pop right back up and prepare herself for the next bout. The wind was near deafening as I prepared to clip on to the next line. What happened next was perhaps a mixture of bad luck and inexperience. I unclipped, just as another wave crashed violently against the hull of the ship, causing yet another, impossible tilt. I lost my footing and began to slide towards edge of the deck...I was only falling for perhaps 1/16th of a second but for what felt like an eternity. In this fraction of a second an unimaginably fast string of thoughts raced through my head.

/Oh! That's the railing! I could definitately fit through that!"/

/How long did they say you had to rescue someone from the water before they died? That's right. 10 minutes./

/What was that they said about man overboard again? Oh yeah, that it was incredibly easy to lose someone over the whitecaps, and losing eye contact for a second could cause them to be lost forever./

/What did our guide Matthew say again about my chances of surviving in these waters was? Slim to none- that was it./

/Goddamnit as if I weren't cold enough already./

And just like that the Europa evened out to pop me back on my feet again as if it were nothing but a cruel practical joke. I imagined her quietly laughing as she creened back at me "Greenhand".

I lunged at the safety line I had previously missed and clipped in.  Adrenaline pumping, I looked around- it seemed like no one one noticed.

Back home, my brushes with bad luck were legendary and this would surely be the next subject of ball busting.

I timidly gripped the wheel, unsure of how to handle rough waters and more than a little worried of losing control of such a massive ship.

"You'll be okay! There's always a crew member to guide you!" Someone said next to me.

I looked at the heading and then up towards the sky...and was stunned at what I saw. A moon, partially shrouded in clouds- constellations and stars swarming in dizzying numbers above me...

It was the same thing I had seen when I thought I was dreaming...while my eyes were open the whole time. I second guessed myself and looked up again...and yet, there it was.

I laughed as I understood. I must have sounded mad.

I gripped the wheel and said to the first mate Finn standing by "This is what I came for! Most people come to see Antarctica- a part of me came to see the Drake." I laughed again as the ship rolled and another bout of waves challenged our ship.

He shifted slightly and said "Oh. Well- this is her."

Yup. I was definately crazy.

Since leaving that watch the image of that night sky hasn't left my mind.

The next time I took the helm, the sea was still rough- but perhaps I had gained a bit more confidence since that first night. Sarah, one of the permanent crew stood beside me, she had been quite sick and had been struggling as well. She smiled at me and said that one of the captains of the Europa used to get quite seasick on the Drake as well- and that he once pulled a teabag with the phrase "Empty yourself- so that the universe may fill you." printed on it- and that since then it was something he would always say to her and anyone else that was seasick.

She smiled at me and said "I have emptied myself, so that the universe may fill me" before fixing her bright blue eyes on the horizon.

It felt like more than just chance...it was as if everything fell into place.

Maybe it's all just coincidence...or maybe there's something to all those legends and stories I heard all those years ago. Maybe the albatross do carry the souls of dead sailors across the sea and maybe it's my turn to add my own myth to this already mythical place.

Maybe crossing the Drake was never supposed to be easy...maybe it's the price we pay to see the purest place on Earth- and maybe we must purge ourselves first before experiencing a world nearly untouched by man- and maybe the Drake has and will always serve as her protector.

Maybe we must pass through the Drake- not only to see Antarctica- but to dissuade others from coming to taint it.

Maybe, just maybe- we must empty ourselves...so that the universe may fill us.

This is really lovely writing, and paints a picture which brings back memories... including being washed across the deck and wondering what happens next!

It takes a lot to go on a journey like that so they have the perfect person for the crew. Cause you definately have a lot of heart, strength, brains and the ability to persevere anything thrown your way. Go get it Katie! We love you.

We are there with you on this fantastic voyage as if we too were 28 and living our beginnings over again. Love love love!