For a while we stop the engines during last night, drifting on the Weddell Sea pack ice. The spectacle of the Europa between the pack ice floes and surrounded by large tabular icebergs, under the fade moonlight and the torches used by the lookouts, made a special first part of the night. 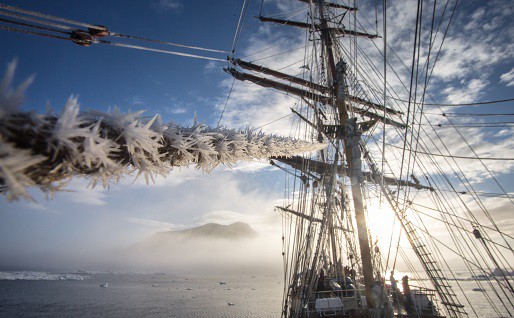 We had to reposition the ship a couple of times when we were drifting towards those big icebergs. But around 02:00h we started again the engines and begin a few hours of struggle though the ice as we try to get closer to Paulet Island, where we plan to land in the morning. On the darkness our progress is slow as the Europa looks for her way between the few and narrow leads left between the ice floes. As daylight breaks the night, we found ourselves still surrounded by ice. But luckily the distribution of the Weddell Sea pack ice is not uniform, being more dense in patches and bands, and finally we can find areas where we can navigate in an easier way. As the sun rises we got into a fog bank, making things again more difficult, but the mist and air moisture, together with the freezing temperatures quickly starts freezing over the ship and her rigging. And soon we have a “white ship” with ice crystals growing all over ropes, stays, masts and all outdoor surfaces. The visual effect is great, as the sun struggles to dissipate the fog and shines over it under blue skies and sparkles on the icy rigging, having Paulet Island just a couple of miles ahead of us.

At the end we managed to get next to the landing beach and by coffee time the zodiacs are launched and we can go ashore on that beautiful morning, to visit this volcanic island. Paulet is circular with a diameter of 1.5 km and it is located 4.5 km south-east of Dundee Island, in the north-east end of the Antarctic Peninsula. It is known because its large Adelie penguin colony and also because its numerous nests of Antarctic Shags. It is believed by geologists, that this volcano made its last eruption more than 1000 years ago. James Clark Ross gave the name to the island after discovering during its expedition from 1839 to 1843. The name was to honour Captain George Paulet of the Royal Navy. The island became well known because it is the place where Larsen (Captain of the “Antarctic”, the boat of the expedition of Otto Nordenskjold Expedition from the beginning of the 20th Century, that sank in the area) spent 10 months waiting with his crew for rescue. On our walk we still could see the remains of the presence of the Nordenskjold expedition with parts of the stone hut and a grave in which lies the body of the only one sailor who died during the expedition. The grave is oriented north-west and the cross is still surprisingly in good condition despite its exposure to the elements.

All over we can see what is left behind after the large amount od Adelie Penguins are gone by now: pink-orange guano and quite a lot of dead chicks that never made it to be fully fledge and ready to go at the point when the rest of the colony migrated. Quite a lot of the Antarctic shags that inhabit the island where still around, finishing their moulting and still thinking when to leave the area and migrate to lower latitudes. Surprisingly just a few big Fur seals were around, and having a look at the ice offshore, we could also spot several Crabeater seals snoozing on it. Besides the still remaining wildlife, the grandeur of the landscape is overwhelming. Mountaintop, colorfull hills, fresh water lakes filling up old craters, the icy waters of the Weddell Sea around us and the ship anchored at the distance. All this on a deep silence, completely different from when the penguin colony is trilling with life just a few weeks ago.

After having a look at our surroundings from an elevated viewpoint, we make our way to the beach again to be picked up, and after everybody embarked the ship we immediately departed towards the Antarctic Sound again, now useful as an exit door from the Weddell Sea to the Bransfield Strait. For a while we were seeking for an ice free passage but soon we found relatively open waters following the coast of Cape Purvis in Dundee Island. Once motoring along the Antarctic Sound we find ourselves facing strong tidal current against us and light winds. As we quickly found open waters and didn’t have to deal with heavy pack ice areas on our way out of the Weddell Sea, we still could enjoy spending some time going close and around some of the most spectacular icebergs that we find on our way, with the typical Rosamel Island on the background. This circular island is just 1nm in diameter with precipitous cliffs of volcanic rock rising to a snow-covered peak 435 m high, lying in the middle of the Southern entrance to Antarctic Sound.

It was already discovered by the French expedition during the years 1837-40, under Capt. Jules Dumont d'Urville, and named by him for V. Admiral Claude de Rosamel, French Minister of Marine under whose orders the expedition sailed. After passing by this area the wind picks up to over 15 knots from the SSE, enough to start setting some canvas. We quickly unfurl and set Top Sails, Top Gallants, Inner Jib and Desmond, but as this last starts flapping, it was taken away an hour later or so. After dinner as we are getting off the Antarctic Sound and getting into the Bransfield Strait we set the Fore Course and Royal under increasing SSE winds up to 18 to 20knots, sailing almost downwind between 5 to 7 knots. Situation that lasted until after 02:00h in the morning when the wind died down and we started the engine.

Soon we will swap from following the adventures and misadventures of the Swedish Antarctic Expedition under Nordenksjold (1901-03) to the hardships of Shackleton’s polar odyssey for survival. We are on our way to Elephant Island and South Georgia, two of the places that played an utmost important paper on the events following the wreck of the “Endurance” in the Weddell Sea. Sarah introduced us to this part of the polar history after dinner, and then the documentary “Encounters at the End of the World” from Werner Herzog was played in the lounge. Great and different from the rest of Antarctic documentaries, focusing more on the people working and living here, their personal history and their motivations, than on the penguins and rest of wildlife.

With this day we close the Weddell Sea episode of our trip, a place of absolute beauty, icy and cold, full of difficulties and uncertainties, potentially treacherous, unpredictable. After the last days feeling the isolation, roughness of Antarctica on its full, and with lots of stories and adventures of ourselves and reminding the struggles of the early explorers who ventured on those waters, we leave the Weddell and continue our journey. We will still be for a couple more days in Antarctica before heading for the magnificent South Georgia Island.