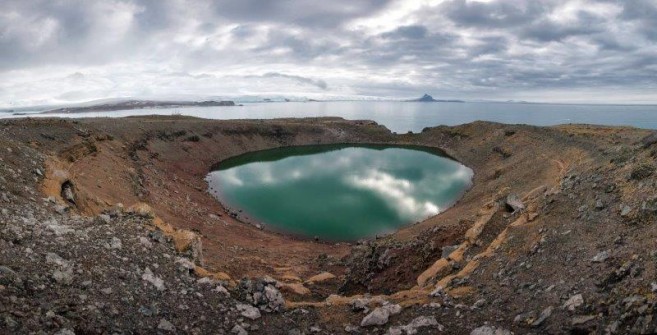 With light breeze we motored westwards across the Bransfield Strait during all night. Even though the wind is not good for sailing, it is a relieve not being on 40 or more kn of strong gusts on our nose, as we have been during last afternoon, night and today’s morning. Foggy conditions lasted until the early hours of the morning, then it dissipated as we got closer to the southeast shores of King George Island. We are back in the South Shetlands.

The good speed planning for this crossing brings us to our anchorage, in the sound between Penguin and King George Islands, just by breakfast time. Once we finished our meal, we got our briefing on how to manage this landing, as there are quite a lot of sensitive and off-limit areas on the island, and we went ashore. Penguin Island island is also of volcanic origin, related with the other volcanoes visited during our trip, Deception and Paulet Islands. Penguin is 1.6 km in length, and marks the east side of the entrance to King George Bay. It was first sighted in January 1820 by a British expedition under Bransfield, and so named by him because penguins occupied the shores of the island. Its most prominent geological feature is the 170 m summit of the volcanic crater Deacon Peak.

The summit is easily accessible along its North face sloping gently to the landing area, while cliffs surround most of the shoreline. Before climbing to this peak, we first all had a look at another low crater on the northeast side of the island. It cannot be seen until reaching its rim, and then spectacular views appear in front of us. This secondary crater contains a freshwater lake; steep slopes surround it and its ridge is covered in lush Antarctic vegetation. In the background, the long glacier fronts of King George Island. From here we could choose to stretch our legs further up the mountain, or stay on the lower slopes. Annukka stays with the ones that prefer to take it easier. They visit a Chinstrap penguin rookery and had great views over the beach area, festooned by numerous Fur seals lying around the scattered whale bones, still from the early whaling period. Many Chinstraps are still around. The colony mainly counting with moulting adults and almost fully fledged chicks. Skua’s are usually nesting here, but now their youngsters are big enough to fly everywhere, showing a darker plumage than the adults. Jordi and Eduardo hike to the Deacon Peak summit and walk around its characteristic crater, with a smaller volcanic cone inside.

The views from the summit are stunning. High precipitous cliffs fall over the south side of the island. To the North, King George Island’s massive glaciers glisten when sunrays break through the cloud covered sky. At our feet the Katsui Strait, the narrow boat-passage between King George and Penguin Islands. Red coloured steep volcanic slopes are intersected by a couple of harder basaltic dikes if we look westwards. As we descend, we pass by the beach area where many Fur seals snooze. There are mainly big males, already here after breeding in South Georgia or on one of the smaller colonies close by. Walking amongst them is a good preparation for what we expect to encounter at South Georgia, which we should reach in a few days. Embarking the ship afterwards, we had lunch at anchor and started our way towards Elephant Island. All just in time, as while heaving anchor the low clouds start covering Penguin Island and soon we are in the fog again.

We started motoring against a light easterly wind, which afterwards became stronger, blowing up to 20kn. After changing course towards the northeast and setting staysails, we keep going like this until passing by King George Island’s north-eastern tip (Cape Melville) and just when we got clear of the nearby Simpson Rocks it was blowing at over 35kn and we added the topsails, braced sharp on starboard tack, under freezing conditions, making the work aloft and on deck cold and challenging. Unfortunately, if we want to see anything of Point Wild tomorrow, we most probably will also have to keep the engine running to help stay on our course to Elephant Island, which at 20:00h is 95nm away. Jordi