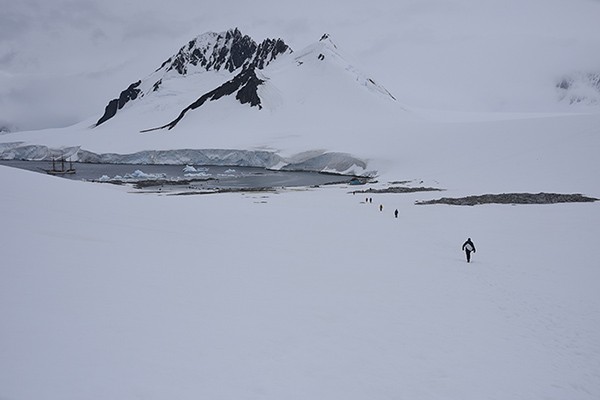 After our visit to Port Lockroy we are all back on board just in time for lunch. Instead of leaving straight away we stay at anchor for a bit – talking through the further plans for our voyage. At two o´clock we hear the bells and both Eric and Sarah appear in the deckhouse. This surely means something has to be told. It does. An impressive low pressure system is on its way, and while we were on shore Eric has made the decision that we will leave for the north already this evening. We had still one landing planned, but in this way we gain about 18 hours, which will probably be the difference between being able to sail at least partly, or heading against the wind for the full 645 miles.

After lunch we start heaving our accidentally dropped 4 shackles of anchor chain – and move a few miles for our afternoon landing. We will land in Dorian Bay, starting with a short hike to Damoy point. The weather is good, there is not as much wind on this side of the glacier, and the sun is almost shining. The hill at Damoy Point is is only 49 meters high, but the views are impressive. Down at sea-level we can see and even hear a Minke whale passing by.

From the hill we walk back down – to visit Damoy Hut. It was built in 1975 by the Antarctic Survey, to house staff involved with the planes that used to land on the glacier. The glacier was a transit stop on the way to Rothera station further South. The hut is practical and straight forward. A bright turquoise building with a combined living room and kitchen and a sleeping room with 10 bunks. On a day like this it is easy to imagine living here. Next to the British hut is an Argentine emergency shelter. Behind the hut we can climb up to the glacier where the airplanes used to land. It is a steep but short climb, bringing us to a point with splendid views down to Port Lockroy on one side and Europa anchored in Dorian Bay on the other side. The snow has the perfect consistence to fall into and lay down in – and off course, for a last Antarctic snowball fight. And not only that – it also turns out to be the perfect place for Seth to ask Michelle to marry him.
We heave anchor during dinner, and sail slowly out of the bay. We are not using sails, only the rigging, until the dishes are done and we can go out into wilder waters. We set sails except for the royals, the upper and middle staysails and the gaff topsail – and start sailing north with good speed and nice winds. We have 645 miles in front of us – all the way to Cape Horn. We start off to the North West, which will hopefully later give us a chance to sail on the strong northwesterly winds that are predicted closer to Cape Horn. As we leave Antarctica behind us, we all go straight back into sea watches.