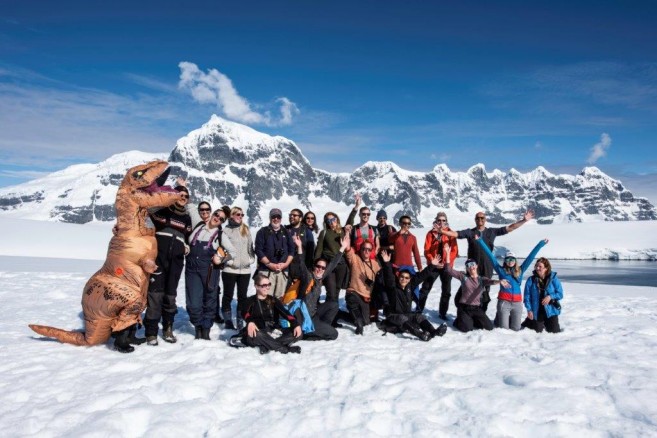 Waking up at our anchorage in the so-called Back Bay, close to a glacier front just passed Goudier Island and Port Lockroy, many of us enjoy breakfast on deck under clear blue skies and intense Antarctic sunshine. Port Lockroy, the wide bay on the large Wiencke Island where the tiny Goudier Island is located, has attracted those seeking a protected anchorage ever since Charcot discovered it in 1904, during his first French Antarctic expedition (Français, 1903-05). He named it for Édouard Lockroy, a French politician who assisted Charcot in obtaining government backing for his expedition. Afterwards the bay was used by whalers, and as many as 40 of their vessels could fit here during the summer season. Big rusty mooring chains, a few scattered whalebones and a couple of old wooden waterboats remain as silent witness of the busy whaling past of the area. Its more recent history is related with the construction of a Station
established here during the WWII in 1944 to observe wartime enemy activities around these Antarctic waters, as part of the secret
“Operation Tabarin”. Later on, the base was handed over to science and was operated by the British Antarctic Survey (BAS). Nowadays it is taken care of by the United Kingdom Antarctic Heritage Trust, and it works during the summer season as a sort of Museum, Souvenir shop and the most known Post Office in Antarctic Peninsula. All this and much more was explained to us by Hannah, one of the local
girls that team up this Austral summer season to maintain and take care of this Historical Site. She was brought on board around eight o’clock to talk about the area and its history and inform us about the local current state of affairs. Due to the reduced space inside the museum buildings and the small size of island where they are located, together with the chance to visit the scenic Jougla Point (a rocky Wiencke Island cape just next door to Goudier Island), we decided to split the visit in two groups and visit both of those places.
In Port Lockroy Base we can use the reduced walking space around it (half of the island is closed to visitors due to research project on
their impact on the Gentoo population and their breeding), to enjoy the multitude of Gentoo penguins nesting all around, nowadays counted by several hundreds. It is difficult to believe that this location, back in 1944 was chosen to erect the buildings because there were no penguins breeding here. In Jougla Point we ascend a snowy hill from our landing site to gain a bit of elevation which allows us to get panoramic views of the bay and the surrounding mountain peaks and multiple glaciers. We visit a Gentoo penguin colony on top of the small hill before descending into the skirts of the bay where Antarctic Shags breed, mixed in with yet more Gentoo Penguins. Several Weddell and leopard seals are also hauled out on the nearby ice flows. Right between the nests, staff from the station is conducting research and this particular day surveyed the number of penguin chicks currently in the colony. After a couple of hours visit the groups swap landing sites, so everybody had the chance to visit and walk around to the panoramic views of Jougla, and also to visit the museum, post office and souvenir shop at the Base. There several post cards are sent by most of the voyage crew and many souvenirs of different kinds are purchased as memories and to raise money for the ongoing restoration work around the peninsula
carried out by the charity. Back on-board for a late lunch we heave anchor and continue in the sunshine to Dorian Bay. Dorian Bay is a cove located on the north-western side of Wiencke Island, just about 3nm from the entrance of Port Lockroy harbour. The place was discovered and named by Charcot’s French Antarctic Expedition between 1903 and 1905. Charcot named it after a member of the French Chamber of Deputies. Two structures were erected on the shores of Dorian Bay; the Argentine Refugio Bahia Dorian in 1957, and a larger building known as the Damoy Hut in 1975, where it served as a British summer-use ice-strip for aircraft operations, before a new airstrip was built at Rothera Station, located further South. The Damoy hut and ice-strip were closed in 1995: the building is now listed as a Historic Site and Monument and is maintained and administered by the United Kingdom Antarctic Heritage Trust. The group as a whole, makes a short walk on the glacier to a small ridge to observe a penguin rookery. Here the group splits and some make a longer hike up the lower part of the glacier to the site of the old runway. This viewpoint offers great panoramic views over Port Lockroy down below, encircled by jagged mountains and tumbling glaciers. A short snow slide makes a fun way to descent and back at the landing site the zodiacs are waiting to take us back to the ship. The evening is spent cruising the Neumayer Channel in the setting sun, and then across the Gerlache Strait to reach Andvord Bay, where we plan tomorrow’s morning landing, on the continental shores of Neko Harbour.