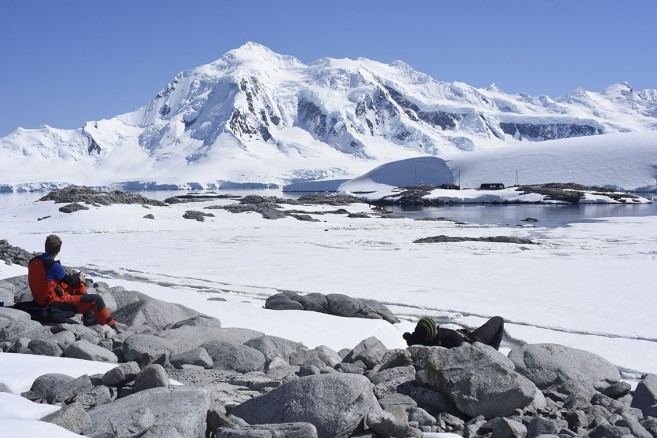 As we wake up, a thin layer of ice has formed in the bay. The sea reflects the mountains like a foggy mirror. Port Lockroy is very well sheltered – so well sheltered in fact that Charcot did not consider it a good spot for his expedition with the Pourquoi Pas, because his weather observations would not be of much general use. The 800 m long harbor lays on the west side of Wiencke Island – the island that Gerlache named after the young sailor that fell overboard during his Belgica expedition.

Just after breakfast, half of the staff that runs Base A at Port Lockroy comes on board. Usually they send only one person, but for the beauty of our ship they have sent two. The ladies give us a little introduction, before we all go on land. Base A is located on tiny Goudier Island. It was established by the British in 1943-44, for a secret navel operation called 'operation Tabarin', after a Parisien nightclub. It was staffed until 1962, after which it was slowly decaying. The main building of Base A, Bransfield house, was beautifully restored in 1996, and now houses an interesting and well equipped museum about the different activities that have taken place on the island. Especially interesting are the murals that decorated the man´s bunks, see photo. The staff at Port Lockroy receives about 85.000 visitors during the four months that make up the Antarctic summer – and apart from running the museum and gift shop, they also carry out maintenance work and count penguins. Part of the small island is fenced of – here the penguins are not disturbed by humans, while on the other side they mingle with the touristic activities. Monitored since 1996, it has become clear that they don´t seem to care much, they even have slightly higher breeding success, probably due to the humans acting as scarecrows for the skuas.

We land close to a big mooring chain – a rusty leftover from the whaling period. We spent some time in the museum, the shop, looking at the island and off course, sending off our post cards. After, we take the zodiac over to Jougla point. There is still no wind, and the temperature has been rising. We try to guess how warm it is. 15 degrees? 17? Maybe a 20? It is probably colder than that, but many a layer of sailing gear is peeled off as we start our walk. We hike up a little – passing some Weddellseals, and then descend close to the glacier. Here we have a very good view at the small Goudier Island, with Europa in the background. There is still a lot of snow – some large rocks are sticking out and are perfect for sunbathing. Since there is still a lot of ice in the small bay it is impossible to be picked up here by zodiac, so we hike back up and down. Close to the landing site blue eyed shags are nesting – with their fluffy down the chicks are almost as big as their parents, and some of teh nests house three of them. At Jougla point, Blacky and Grey pick us up, just in time for a beautiful lunch on deck.

Port Lockroy is a busy site, in fact one of the most visited by passenger ships. There are several landing sites around, but they are all booked by other ships. Luckily you don´t have to enjoy, and definitely not with this ship; we heave anchor and set out to circumnavigate Doumer Island, first going through Neumayer Channel again, returning through Peltier Channel. We hope to see some more whales – and we do. This time we launch both zodiacs, so everyone can hopefully get a chance to see the whales close by. After about an hour, the group of three has unfortunately left to other waters, so we continue with our circumnavigation and arrive back in Port Lockroy by dinner time. It is the first time on our voyage that we spent more than one night in the same place, a rare event for most voyages, but how nice it is to come back to the same anchor place, surrounded by the same glaciers and mountains, and to meet the ladies from Port Lockroy again. They come on board for dinner, a dinner we have been anticipating for hours, sitting on deck, close to the ventilation shafts that brought us the most delicious smells. There is rice with vegetables, peanut sauce, chili, eggs baked by our captain, and so much more. The evening is as beautiful as yesterday, and we spent it here in Port Lockroy. The anchor watches have been filled up in no time earlier today – all is well – we are enjoying.