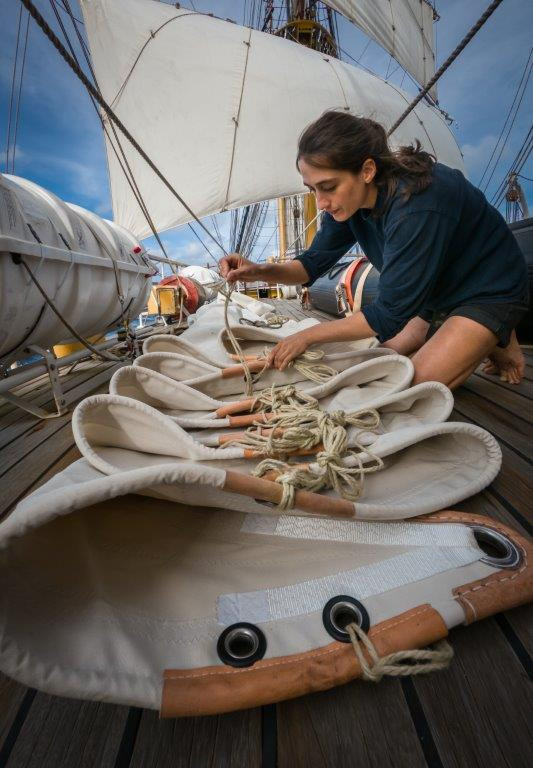 The Barometer dropping indicates what’s to come during the next few hours or even a couple of days. Having a look at it, confirms what the weather forecast announced already, the imminent passing of a Frontal Passage, with associated strong winds and sure an increasing swell.

So far, the morning looked like nothing in the prevision, waking up to cloudy skies that gradually became clearer, even having the sun shining for lunch.   Promising weather to bend-on the new Main Top Gallant Staysail, replacing the old one that was found to have an open seem. In a couple of hours the new sail is fished out the lower fore-peak, home for a stash of new and replacement sails, flaked properly on deck, robands laced in position. Hoisted to her position afterwards, it was ready for whenever required to be set before dinner.

Braced square, Europa sails downwind the 15 to16kn of fair northeasterly breeze at 3.5 to 4kn of speed, affected also by a strong southbound current. Leaving the Brazilian coast at our starboard side, she still doesn’t head straight to her final destination for the trip, but leaves space for having a good location for dealing with the forecasted bad weather.

Not just her course is adjusted but also the day is spent preparing her for rough seas, increasing winds and rain. But before facing the incoming Low Pressure front, better to gain some good distance and make some speed while we still can. The cold front will hit us with strong Southerly winds, turning to SSW-ly and afterwards hopefully a good SE-ly breeze to help us steer towards Rio de la Plata.

More canvas flies on her masts during the morning, and her braces are pulled to be a point on Starboard tack, slightly heeling to Port for first time in many days. Not for long, as already in the evening we change tack again, with the wind calming down and becoming first N-ly and then N by W. Shifts and calms before the line of clouds that starts revealing itself in the radar screen hits us. Thinking ahead, is time for start taking down some of the sails.

At that point, is decided to sail downwind facing the incoming Front. And soon its drastic effects on the seas and winds could be felt. Suddenly the N by W wind turns S-ly in an unexpected big shift, running the sails aback. Turning hard the wheel, the jibs take wind to turn the ship around. New course is suddenly a northwards downwind over increasing swells.
It didn’t take much time until the yards are braced sharp on Port Tack, sailing close-hauled towards the coast. Until then, manoeuvres and sailhandling were performed in still moderate wind and sea conditions, but better be ready for the next dark hours during the night for deteriorating conditions.

Watertight doors on Main deck are closed, ventilation inlets as well. Safety lines checked and in position, cabins and common spaces sea fasten. Soon we were about to experience that the forecast didn’t disappoint. During the night, both permanent crew watches are required on deck to douse sails and quickly furl Top Gallants, Courses, Middle Staysails, Flying and Outer jib under gusting winds of over 30kn. Decks became an increasingly difficult area to work and walk on, with the ship heeling and now and then taking some waves over the rail.

During the next hours the gusts and blows seem to stabilize a bit, time for adding more speed and power to the sail configuration, now barely flying Top Sails and a couple of Staysails. First the Main Course is sheeted and tacked down. Sure in the next hours some more canvas will shyly show up again in the masts and stays.

What a lively tale!

You tell the tale of the journey with a wonderful lilt, bringing excitement and understanding to the reader. Thank you. Tom and Lori are my adventurers onboard.

Thank you Jordi for all the news.