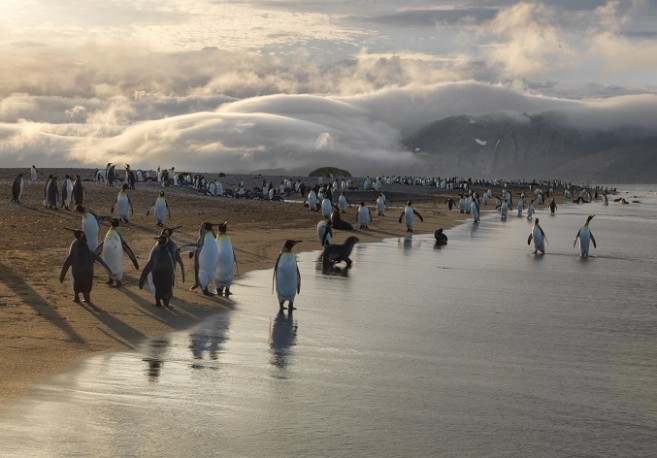 About breakfast time we heave anchor in flat calm seas and foggy grey weather, to start or short way to Prion Island. Last night a sign up sheet to divide the group in two smaller ones wasposted, due to the restricted space available for this landing and the South Georgia Government regulations on this restricted and regulated small island, site of high environmental sensitivity and exceptional conservation value. A special permit is required to be able to visit Prion Island, a well-known nesting area for the magnificent Wandering albatrosses, the largest flying birds on earth.

About breakfast time we heave anchor in flat calm seas and foggy grey weather, to start or short way to Prion Island. Last night a sign up sheet to divide the group in two smaller ones wasposted, due to the restricted space available for this landing and the South Georgia Government regulations on this restricted and regulated small island, site of high environmental sensitivity and exceptional conservation value. A special permit is required to be able to visit Prion Island, a well-known nesting area for the magnificent Wandering albatrosses, the largest flying birds on earth.

Around 09:00h we anchored South of the island, and after conducting the mandatory scout of the landingsite and the boardwalk that we all have to follow during the duration of our visit to Prion Island, we landed on the 75 m long pebble beach on the Southeast coast. The access by zodiacs goes through shallows, rocks, reefs and kelp beds. The small cove where we landed (the only one permitted in Prion Island) was crowded with Fur seals pups, a group of moulting Gentoo penguins, a few elephant seals and several Giant petrels. Soon some South Georgia Pipits were also spotted. This island has remained rat-free for long, and that is the reason why is home for such diversity of birds, including the endemic pipit. Since the rat eradication program has been going on, pipits are starting to return to all areas along the East coast of South Georgia, from where they were wiped out by the Brown rats, so far we have been lucky enough to spot them during every activity we have done throughout the days spent here.

From the zodiacs we directly proceed up the boardwalk, to the couple of viewing platforms strategically designed to get up close to some of the Wandering albatrosses nests. The boardwalk represents an easy way up and down the hills for the Fur seals as well, as we could see on our way. From the uppermost lookout point we could also have an overlook at the flat areas on top of the island, where many other nests were scattered around and also used as a runaway area to take off and landing by the many albatrosses and giant petrels that inhabit Prion Island. Today due to the lack of wind the albatrosses where mostly sitting on their nests, and just a couple of them took off while we were ashore.

The size of those birds became apparent as we stood just a few meters away from them, giant males and females sitting on young chicks. One of the nests was even a couple of metres away from the middle observation platform, where an old female was taking care of her chick, which whom we got quick glimpses of when the mother occasionally stood up. Several Giant petrels nest as well close to the albatrosses. Their chicks being almost fully fledge in comparison with their neighbours. The Wandering albatrosses need around 250 days for the fledging of the chick.

After spending the morning enjoying the quietness and relaxing landing in Prion Island, we embark for a short ride over lunch to our next destination, Salisbury Plain, a vast expanse of glacial outwash plains on the Southern shores of the Bay of Isles. Formed by the retreat of the Grace Glacier, and now covering over 2 square kilometres, being the largest flat area in the island. The place is home to the second-biggest nesting colony of King Penguins on South Georgia, an estimated 180,000 parents and chicks in all. But first estimated at 350 pairs in 1912, the colony has undergone a phenomenal increase in the later years.

At our arrival the fog lifts and we are welcomed by good weather and surprisingly almost no surge at the beach. The views of Salisbury Plain that we get after the misty day were astonishing. The long beach and large coastal plane are surrounded by hills covered in tussock grass and in the background, mountains and glaciers.
We landed without much difficulty at the main beach, and straight away the views and the large amount of curious seals and penguins all around were astonishing. All surrounded by a gorgeous landscape of mountains and glaciers framing the picture. After enjoying the crowded shores for a while, we walked towards the main penguin colony. There, tall penguins cover the plain shoulder-to-shoulder and the rockery extends up the slope in the background. An overwhelming experience for all our senses.

We could see King penguins laying on their eggs, chicks on any state of development, moulting youngsters looking fat and funny, moulting adults needing a quiet place at some of the edges of the rookery, and of course the predators were all around. After a while it was time to walk back to the zodiacs, while the sunset light was getting better and better. After returning on board, Europa makes her 25 miles way to Fortuna Bay, where we plan to land in the morning and walk from there to Stromness, part of what is known as the Shackleton walk.
We drop anchor around 22:00h and some of us enjoy the darkened ship, the clear skies and starry night doing voluntary anchor watches.