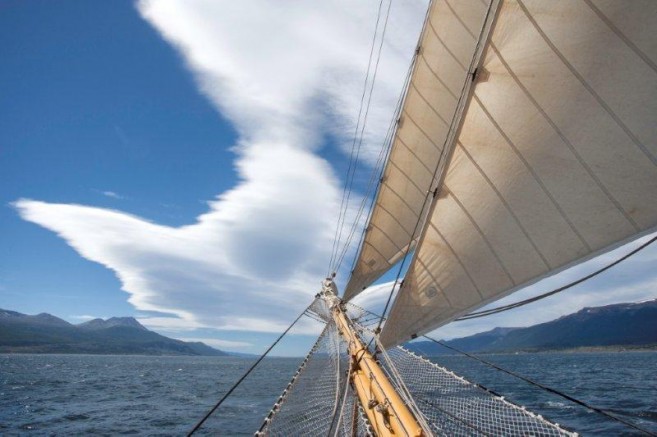 Right after we started loosing the mooring lines, without much hesitation we were all pulling ropes.

Right after we started loosing the mooring lines, without much hesitation we were all pulling ropes. Even not being very conscious about it, when we looked up we could see the canvas set, taking the wind as we got really good conditions for leaving the pier under It was really great that already before lunch we got some hands-on for start developing our rope handling skills. Afterwards the crew was also getting the ship ready for the Drake Passage crossing, sea fastening everything, rigging safety ropes and nets.

Just lifting our eyes from the ropes and decks and having a look at the sea around us, we could see already several species of seabirds, all frame by the mountains and pristine forests of Southern Patagonia. Some large groups of Black browed albatrosses, South american terns, Kelp gulls, some Chilean skuas and even a few Magellanic penguins were spotted. When we enter the Drake Passage tomorrow we expect to notice an immediate change in the bird community as we leave the skuas and gulls behind and enter the realm of the true seabirds - the petrels, prions and albatrosses of the Southern Ocean.

Other wildlife highlights of the day were the sightings of a group of Peale’s dolphins joining us for a short while.

The wind picked up and we could enjoy some proper sailing along the Beagle Channel, and even before lunch time it increased up to 40 knots, having to stow away some sails. Top Gallants and Middle Staysails were furled and we enjoyed a relatively quiet lunch, sailing along at between 5 to 6 knots. From then onwards we started the watch system that we are going to keep until reaching the shores of Antarctica.

In the afternoon the sky was becoming cloudier, showing some high spectacular lenticular clouds first and then becoming more covered. The sails that were taken away before lunch were set again, together with the Spanker in the Mizzen Mast.

In that way we spent the afternoon, having a great sail on the old lady Europa on the waters of the Beagle Channel, before arriving to the open waters of the Southern Ocean.
And then, finally the instructions that many of us were waiting for: climbing the rigging. Many of us looked for a harness, learning to don it properly while Mark and Paul helped us in the Main Mast to start our firsts steps aloft.