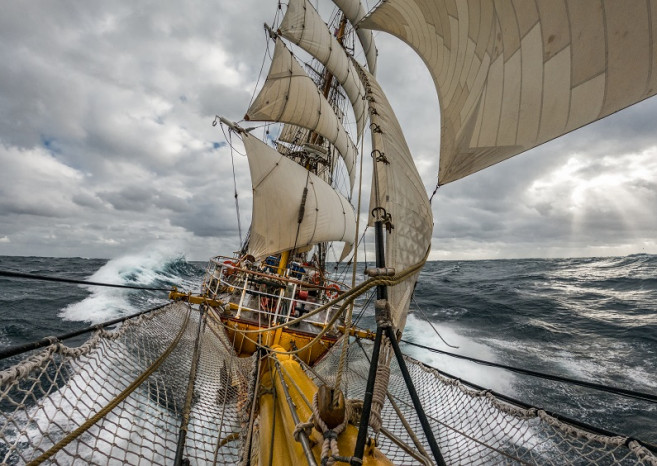 It didn’t take long for the forecasted strong Southerly winds to start blowing already during the night, shifting to Southeasterly in the early morning.
With the blows up and down from 25 to 35kn, it's time to pull down and furl the powerful Outer Jib. Backing winds made too for bracing sharp on Starboard tack and sheet-in the staysails.

For the hours to come, the Europa keeps sailing hard with the Squares up to the Top Gallants, Spanker at the aft, Aap and Deckzbabber midship, and Inner Jib at the bow.

The rising winds and the swell becoming higher means for us: to take a considerable heeling and rolling, for the decks to get awash often, for the canvas to fill and strenuously pull us forward at a good speed. It also creates a convenient environment for the flocks of Prions and small groups of Spectacled petrels to show up again, after the easing yesterday’s conditions.

One day after the other, rough seas, tough sailing conditions, overcast and rainy weather, seem to take turns with abating seas, calmer winds, and skies clearing up. A contest between weather systems, Highs, and Lows seemingly chasing each other, raging winds compressed amongst them, calmer areas in-between. Temperamental and fiery Zeus chasing the beauty of Europa. The powerful bull, God of the sky and the thunder, king of the Olympus Gods, drawn by the voluptuous Phoenician nymph. The seduction, strain, and pressure of an abduction, the stability as Queen of Crete, the lifetime mother of a continent.
As our figurehead, they are both hand-carved together in Patagonian wood, proudly showing themselves under our bow.
The Sky father as a mighty white alluring bull, Europa as an artistic naked beauty, with her gaze straight to the horizon.
Perhaps following a classic old tradition from the 18th century, when superstitions reigned amongst sailors, female beauty and nude bosom presented to the ocean could call for Poseidon to smooth his temper and calm down his temporary rage.

From the mid-1700 onwards the figureheads of large ships usually took the form of a nubile young lady in an otherwise bashful state of undress.
Sailors believed that a woman baring her breasts to the elements could shame an angry sea into calming down, which might go some distance to explain why female figureheads became increasingly well endowed.

…With her eyes always open and looking straight ahead, a watchful figurehead helped keep the ship’s course true and prevent the vessel from getting lost.

Well, sometimes we may think it could work. On other occasions, no matter what, Europa’s enchantments over the powerful seas seem to take a while to actually persuade Poseidon to calm down. Meanwhile, she ends up sailing in wrathful seas and howling winds.