Racing towards Cape Town on another day of spectacular sailing. Over half way from Tristan da Cunha to Cape Town. Last night we sailed with all Europa’s canvas set, with slowly increasing winds, reaching speeds up to 11kn. 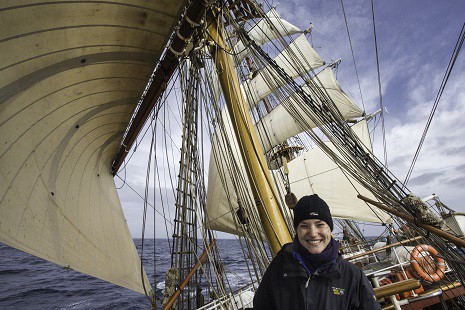 Situation that lasted until around 03:00h in the morning when is decided to start taking away some canvas. Half an hour later all light weather rig is stowed away. Gradually skysails come down and Royals, Flying jib, outer jib, Upper Staysails and Gaff Topsail as well. Later on, before breakfast, Desmond is replaced for the smaller Aap. The wind has picked up to 25 to 30kn as forecasted and by the morning we sail on a 075º course at 9.5kn. Surprisingly, today, when we are at half way from Tristan to Cape Town, at 800nm far from land, a Skua flies with us for a couple of hours during the morning. Usually those birds are more associated with coastal systems, but probably, by now, after finishing their breeding season, they start to disperse and migrate to lower latitudes and continental areas from the Subantarctic Islands and Tristan Archipelago.

Other interesting birdlife around us today was the presence of a few huge Tristan albatrosses, Prions, Atlantic and Grey petrels, all of them related with Tristan archipelago. After coffee time, it was time for Sarah Tanburn to have her talk on Women on Tall Ships, specially in the high Southern Latitudes”. It was usual for women to join those ships in the 18th and 19th centuries, and there are vague records, not very trustful evidence and the information that has arrived to us in many occasions is not much reliable. Nevertheless there are some remarkable examples that Sarah has been researching and she presented them today to all of us. Besides talking about some specific examples he mentioned the different ways a woman could join a Tall Ship in the past: Having no choice (being convicts and forced to join), Prostitution (mostly in the ports, but for example on the English fleet, the sailors were not allowed to disembark in the ports, so the women were visiting them on board), another way they could sail was joining the ships as wives of the Officers (mostly on the whaling and merchant ships or with some Clipper Captains), and the fourth option, but much less common and normally under masculine disguise , was to actually work on the ship or actually being on the Pirate fleet as well.

Having a great sailing day, but not being very busy sailhandling, due to quite constant NW-ly winds of 22 to 24kn, and with the Europa sailing at 9.5kn on a 070º course; the crew keeps going with their maintenance projects, seizing blocs for the new Fore course sheet and the Skysail brace. In the afternoon and evening the wind keeps blowing quite steady at 25kn with some peaks up to maximum 30kn from the NW. No sail changes are necessary as the Old Lady keeps an average speed of 9.5kn on a 065º course. It seems that she is eager to reach Cape Town, where a week of maintenance is planned for her. Europa looks like is impatient to spend those days in her beauty saloon.

As we race along, in the afternoon Robert Jonhson, son of the famous Captain and documentary maker Irving Jonhson, gather us in the Deckhouse for a talk and question session about the incredibly interesting sailing life of himself and his family’s. In the afternoon as well Renske and Pien keep going with their galley’s tours showing us the secrets behind the storage hatches and how they manage to keep us well fed during those long trips. Afterwards our next meeting is after dinner, as every day. There the Captain informs us that the distance covered from noon to noon has been of 162nm, but if we look at the last 24h between eight o’clockies, she has sailed 200nm. Ahead of us 720nm to arrive to Cape Town, and from Tristan da Cunha we have done already 881nm of spectacular sailing across the South Atlantic. The forecast for the wind indicates that it will be backing more to the West and decreasing a bit, still fare winds for us to sail to South Africa.

Ahoy Europa! I have been reading your log and following your whole journey from Ushaia with great interest. I will be on the same voyage next year with my brother Greg. We have already paid our deposit of course and I think I have already had my money's worth just in anticipation! I can't wait until 1st February to join the crew! Bon voyage Michael

Love the photo. Looking forward to welcoming you and the gang in Cape Town, Jordi. Your clean shaven photo continues to flatter you :) In next blog can you estimate a proposed arrival date? Are you still expecting to arrive on 29th April. Bon voyage.