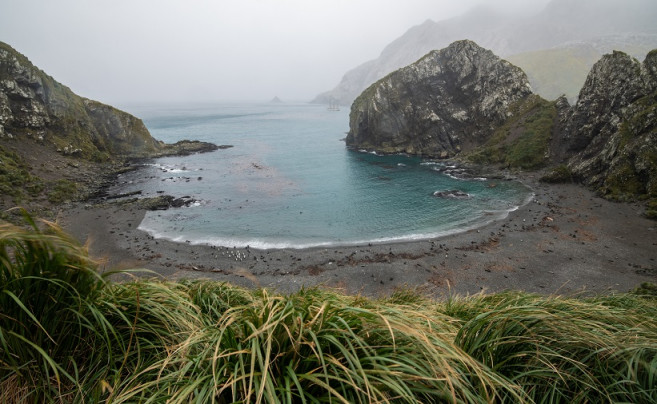 A rainy night motoring against headwinds and still rolling on the long swells, brought us to the shores of the Northwest tip of South Georgia.
At dawn, here and there amongst the low clouds come to view the steep 400m rocky cliffs at the western entrance of Elsehul bay, the first destination for the Europa in the island.

Once known as Paddock Cove after an early sealing captain, perhaps one of the first visitors into the harbour in the 1780’s, nowadays the bay is known as Elsehul (Norwegian for Else Cove), name that dates to 1905 when the first whalers rediscovered the bay.
Captain Cook, after landing, charting and taking possession of the territory for Great Britain in 1775, brought back reports of the large amount of Fur, Elephant seals and whales inhabiting South Georgia, which triggered the beginning of a profitable seal exploitation.
It didn’t take long to kill large numbers of Elephant seals for their blubber and virtually extinct the large populations of Fur seals.

After what we have seen today during our morning landing and the large number of them resting in the Antarctic coasts, it is hard to believe that in 1928 just one individual was spotted during several weeks of survey in the area.
Nowadays the shores of Elsehul represent one of the densest breeding beaches for fur seals in South Georgia.

Besides all the daring anonymous names that visited the cove throughout the sealing and whaling times, one stands out.
During his third trip south in search of new lands where to continue the seal hunting, James Weddell anchored in Elsehul area in 1823 and supplied his vessel Jane with fresh local greens and albatross chicks to restore the men’s health after months at sea.
It was during the same journey that brought him 340 kilometres further south than Cook’s record of fifty years prior, into the Antarctic waters that nowadays bear his name.

As the ship approaches a suitable anchorage, the scenery around her is impressive.
Four kilometres long and at its narrowest 300 meters wide bay, the Tussock grass blanket its slopes waving in the strong winds.
Large grey rock walls frame its entrance, giant kelp patches cover the coastal waters, howling Fur seals all around and the mysterious ambience the fog and light rain adds to the setting.
A climate typical from the NW of the island, usually much wetter and cloudier than the central coast.

With the strong gusts of wind from the northeast, it is soon clear that the best option to set foot ashore after our crossing at sea from the northernmost of the South Shetland Islands, it will be deep into the cove, at the shores of the Inner Bay.

A calm beach, a welcoming committee of countless playful Fur seal pups and numerous King penguins populate the coast.
At the background, three trypots lie, cauldrons remaining here as witness to the island’s bloody past.
Used by the Elephant seal hunters to boil their blubber, now they offer shelter for penguins agains the winds and are home for local tussock grass growing in them.
A handful of King penguins try their breeding efforts at the foot of the slopes that climb over a viewpoint to the pocket beach of Joke Cove.
Here, constant trampling of the Fur seals have transformed the landscape, creating a maze of rounded bare tussock bogs, brown slippery mounds, channels and mud which makes for difficult walking.
But worth to try for a little bit atop the small bay headland called the Knob.
There, hiding amongst the tall tussock grass a Light mantled sooty albatross nest was to be found.

Finished a great morning of our first South Georgia experiences, we look forward to what is to come.
Just about 15nm further on a southeasterly direction lies the beautiful Right Whale Bay, and there is where we are heading next.
Soon after lunch and still rolling on quite large swells and pushing through headwinds, Europa enters the area, anchoring at Binder Beach, a glacier moraine 5 cables in length that frames the bay to the West.

Though it hosts a large rookery of King penguins, Fur seals and usually Elephant seals too, the picturesque place is not one of the most commonly visited by tourists, making it one of the many small treasures of the island.

At the inner part of the bay the surge conditions at the beach look promising for an afternoon landing.
And in no time, off we go, working our way with the rubber boats straight next to shallows and rocks that offer a meagre shelter.
Setting foot ashore countless Fur seal pups surround us, while at the background a few Elephant beach masters gather together during their moulting period.
Close to them a bunch of yearlings doze around.
At the gentle tussock grass slopes surrounding the scene, multitude of King penguins, the heart of their colony.

A short stroll takes us to a vantage point up on a rounded hill, from where we have an overlook over the whole area and the crowded King penguin colony.
At the edges of it what seem to be incubating individuals, at the second line fluffy brown chicks gather together between the adults.
Despite the rainfall and foggy weather the place has a real charm and beauty to soak in.
A couple of hours walking around under the pouring rain were followed by quite a rough embarkation in the zodiacs for our way back on board.
Where waits for us  a warm ship, a good meal, a well assorted bar, a library where to work on the thousands of pictures taken, and a deckhouse where to meet and exchange the daily impressions.