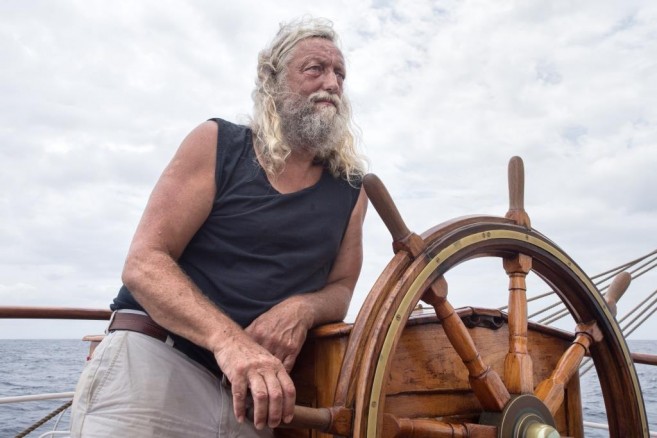 Last night before midnight Klaas decided that the engine should be turned off and from then on our progress should be done under sail only, in an attempt crossing the Horn in the traditional way from East to West.

After wearing the ship and setting all our canvas but the Studdingsails on a 190º course, we could not hear the noise of the engine anymore. At lunchtime Permanent together with Voyage crew help setting the three Studdingsails on Starboard of the Fore Mast, while our Captain takes the wheel. Afterwards it became quite busy on deck, as we wear the ship twice and when we got a more stable wind and course, rigging and setting Studdingsails on both Port and Starboard sides of the Fore Mast, sailing downwind on a 230º course. Several movements had to be done with our Staysails and head rig as well, as when sailing downwind they get shadowed by the squares taking the wind.

During the dark hours, a couple of squalls passed by, bringing more than 20 kn of wind and a bit of rain. Then all Studding sails came down, just to be set again on Port side later on during the night. On our already traditional meeting at the beginning of the afternoon, the captain gathered everybody to give us some information about our progress, we are reaching Cabo Frío latitude (in fact 166 nm offshore of this Cape and all the oil rigs located here), the area where he was planning to stop engines and use the power of the wind on our sails from now on till finishing our adventure around the Horn. That means entering in the “racing mode”, taking the maximum advantage of the wind, and consequently becoming busier and more hectic on deck, also reminding us the importance of the good steering, mostly when rigging all those Studdingsails.

Surprisingly during this morning the first albatross was spotted, quite far from their regular southern distribution range. Some of the species fly northwards as well, and there has been other sightings in the past in tropical waters, like the Yellow nosed albatross, that nests in remote islands of the South Atlantic, but can fly really long distances, up to the latitudes where we are sailing now, with waters over 25º C

Best wishes for a safe and successful rounding to all. My regards to Mr Chris Roche in particular, I`m following progress at home. Fair Winds!