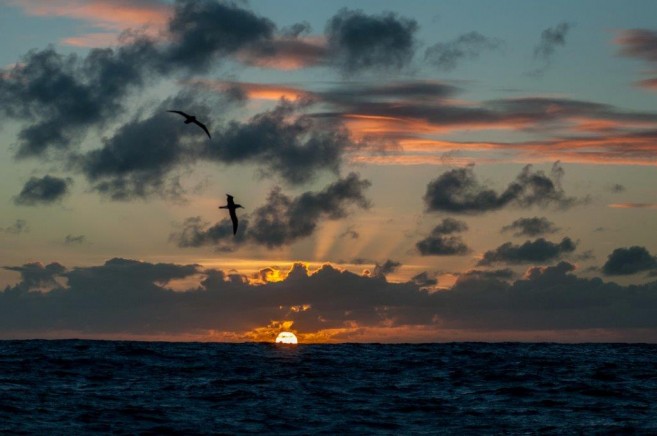 Still under the influence of a High Pressure system, we keep steering on a SE-ly direction while experiencing quite variable winds, that had been with us since we left behind Tristan da Cunha shores. Some canvas went down last night but in the early morning was possible to set it again. Flying Jib, Main Royal Staysail and Vlieger are hoisted while we keep speeds of 7 to 8 kn on a SE-Ly course.

Dawn brings a more overcast day than the past ones, nevertheless the high clouds didn’t last for too long and later on, the good weather is just disturbed by small intervals of showers while several squalls pass by. Those kept the watches awake and in standby, striking higher staysails and gaff topsail just to set them up again after the blasts passed by. The ups and downs in the wind continue to happen for the whole day, until night time when it seems to stabilise a bit more, once veered to NW-ly.

Besides this wind situation, for most of the day Europa rolls on the exceptional long swell, with periods up to 13 seconds, rising to 5 to 6m high. In spite of it, we can keep a good speed of 6 to 7kn on a 130º course that will vary later on to more SE-Ly as the wind started veering. Actually counting with the proper routing to Cape Town, still 1460nm to go. To avoid falling between High Pressure systems, running into their central parts where the winds ease, we have to low a route that is bringing us a bit southwards, maybe just to touch-and-go again the 40ºS. There more steady winds are expected to drive us again on Cape Town direction.

To cover this distance in 10 days means keeping a good average speed just over 6kn. That is the reason why in the afternoon, when the WSW breeze dies down, we start one of our engines for a few hours until wind comes back. And then it does, blowing just under 20kn from the West, enough for us to do speeds up to 6-7kn on decreasing seas.

We basically spend the whole day under full sail, just with little help from the engine when the wind died down, but for a while the Flying Jib stay was empty as the sail was found with a hole and a rip on one of its panels. That made for unbending it to be repaired, but it will take some time and weather good enough to do the job with the sailmaker’s sawing machine.

During the next hours the crew is busy working on finishing the hand-stitching of the Storm Jib that was ripped days ago and still was under repair in the library. Once it is fixed, is brought back to the Bow sprit and bended-on as a replacement of the Flying Jib.

As the evening comes the wind kept veering to NW-ly, and after adjusting our yards accordingly we end up sailing between Broad Reach and downwind, taking the Fore Top Mast Staysail down and stretching the foot of Courses with the whisker poles.

The journey was also characterised by the large amount of birdlife that could be seen gliding closeby. Several reasons could lead the birds to follow the ship. Being an area where fisheries take place, by-catch and remains of gutting fish are normally thrown overboard, so, for them every ship is worth trying. Also as we ride the seas, the hull and propellers remove the water surface, bringing to the top possible nourishment that could be several meters deep. And last but not least, on their way, the ships break the general winfield, creating turbolences and parent winds that the birds may take advantage of for their flights. Like this, a surprising large number of Great shearwaters fly behind the ship, accompanied by the endemic Atlantic and Spectacled petrels. A few of the Massive Tristan albatrosses share the area with the elegant Sooty albatrosses and several Atlantic Yellow nosed also show up. Many of those species have Tristan archipelago as a main nesting grounds and today for a while, they could be seen all together around us, offering a singular parade of uncommon South Atlantic birds.

Many thanks for allowing the rest of the world to follow this interesting journey. The descriptions of the sailing conditions, history and wildlife in the logbook were very entertaining and appreciated. I'm sure that my friend John Nightingale ( cruise crew member from Lethbridge, Alberta, Canada) was pretty excited to see the island in the Tristan group that bears his name! May good winds blow you safely to Cape Town.