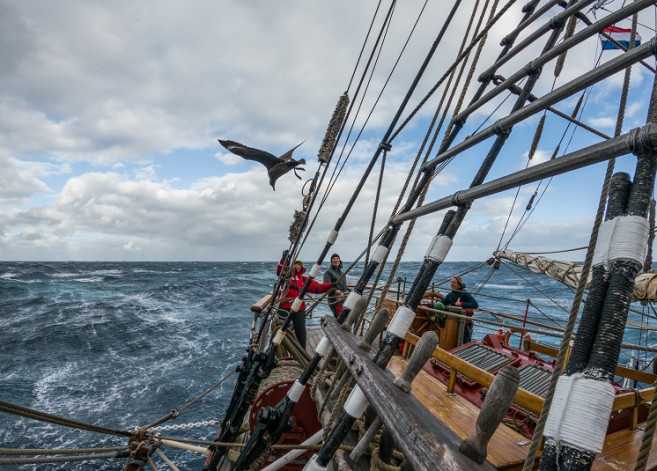 Big swell 6 to 7 meters now and then splashing even over the Poop deck on the big rolls of the ship.
Stong gusts and squalls make for bearing away, coming back on course when they pass.

Another morning that follows the conditions of the last day and a half, a great experience and adventure at sea for sailors and non initiated alike.
Sure more thrilling feats to come, after 375nm sailed since leaving Tristan da Cunha and with about 1300nm of open ocean ahead. Wide-open oceanic waters, uninterrupted by land. But a closer look at the charts, reveal impressive elevations above the flat abyssal plane below our quill. Scattered around, some Sea Mounts rise from 4000 meters in depth to scarcely 170 meters. Together with Tristan Archipelago and Gough Island, those underwater volcanoes have been building up from plumes of the underlying mantle material breaking through the Oceanic Crust. Here, the mineral and nutrient-rich, colder deep waters traveling along the ocean floor, rise following their slope, originating upwellings, aggregating marine life around them. Acting as an isolated life oasis in the vastness of the deep ocean. Likewise, above the water, the Tristan archipelago, a redoubt for life in the remoteness of the South Atlantic, with its diversity of birds and plants, including some species that fell there in immemorial times and have evolved separated from their source populations. Amongst them was one of the visitors that came to sail with us today for a while. An inquisitive Tristan skua flies and tries to land or peck around on deck or over some of the fellow voyage crew while they try to steer the ship.

Over 1000 miles to go, sailing over the deep ocean and its underwater ridges and mountains. Above the sea level, oceanographic currents, upwellings, gyres, and eddies translate into winds, clouds, showers, and storms related to the atmospheric circulation. Whether that along the day, from a tempestuous start, develops to a more stable situation, though still shifting between 25 to 30kn, but with the showers and blasts easing to 35kn.
Still on decks that often dip in the water, permanent and the keen voyage crew that feels adventurous enough to let a hand, brace a bit squarer and set the Upper Topsails.
A look at the weather forecast tells about another day of similar conditions, but on gradually easing winds and abating seas.
South America, South Africa, Tristan in-between, and our track shows in the wheelhouse computer screen, layered with graphics of the current wind situation and the prevision for the next days related to the passing atmospheric systems. Even though with limited communication facilities with the rest of the world, Europa manages to stay in contact with basic text emails and downloading those forecasts, which are becoming indispensable in modern sailing times to follow set schedules with just a relative margin of manoeuvre.
They show the plotted location and movements of the atmospheric Highs and Lows that dictate the winds we need to accomplish the voyage. So far they display a High-Pressure system located to our NW, while a large Depression keeps on its path just below us at our SE. Good location for the Europa to run her way eastwards on strong Southwesterly winds.

Roughly located at the Eastern coasts of South Africa a characteristic High pressure with light and unstable winds at its center, usually makes for sailing vessels following our same route to slightly divert southwards from a straight course. Then coming up north again when closer to land. There, back or close to the roaring 40’s once more, the general wind patterns keep blowing Eastwards.
Nowadays, widespread availability of this knowledge, satellite information, countless weather stations, oceanic buoys collecting and sending data, computer modeling, weather prevision systems, and a whole scholar specialty in meteorology, represent the evolution of what started in the 18-hundreds. By then, a well-known name to all of us, Robert FitzRoy, developed a great interest in this matter from his experiences as a salty Captain, explorer, and surveyor of new lands and seas. Developing the fundamental techniques for weather forecasting and warnings of upcoming storms at sea he was determined to try whatever he could do to save the lives of fellow sailors. At a time when space exploration, satellite communication, computers, and software didn’t even enter humankind's minds, he designed the first prototypes of weather stations and issued his firsts warnings for ships sailing close to the coast, conveyed through the use of a set of visual signals from shore stations.
His understanding of how the weather works was in use as well for vessels en route around South Africa during the Golden Age of sailing, when square-rigged ships explored the four corners of the world, traded goods, and carried settlers with them.