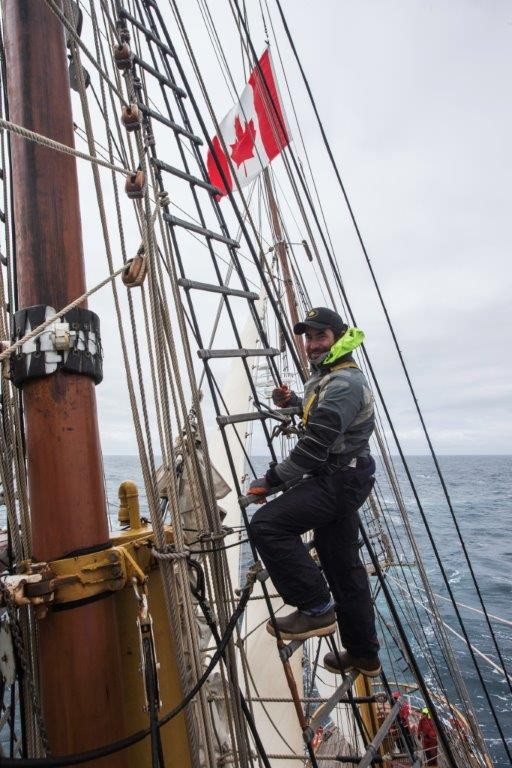 Sun shine when the new day began, in a sort of congratulation for our Canadian-Nova Scotia Second Mate Finn on his birthday. Very different from the foggy and wet yesterday’s conditions. Swell keeps making us roll as Europa motor-sails on a 280º course, after tacking the ship last midnight. Square sails were taken away and just the Lower Staysails, Main Top Gallant Staysail, Spanker and the head rig are set, keeping us at a speed of about 4.5kn.

Hoping for better winds, Top Sails were left on their gear, ready to be set again. But before lunch it was pretty clear that the increasing SW winds and the frequent small showers masking the sunny weather now and then, were not allowing us to do it. Soon the crew climb up the rig and furl them, while flocks of Cape petrels fly around us, Light mantled albatrosses elegantly glide along the ship and a couple of Fin whales are spotted at the distance. Huge blows delate their presence, even clearly visible on the rough seas and windy conditions we had at the moment. Their large  and slim body show a prominent dorsal fin at their dark backs. The colour pattern of their head is surprisingly asymmetrical, showing a dark left lower jaw, while the right one is of lighter colour or white.

Despite being the second largest animal in the planet, after the Blue whale, their range of distribution migratory routes and breeding areas are not well known. They mainly roam on open oceanic waters of both hemispheres, and when seen close to land is mostly where the Continental shelf dips into greater depths. Greatly hunted in all major oceans during the whaling golden era between 1930s and 1960s, recently seems like the population is recovering, and they are sighted often.

The weather instability kept increasing during the next hours, and now the showers came together with strong gusts. After lunch we are hit by one of those, carrying over 40kn of wind. All permanent crew is called on deck to take away and furl the Middle Staysails and Outer Jib, while on the Main deck, the larger Desmond is replaced by the Aap.  In the meantime, Europa bears-away in the strong gusts. With the sail configuration left, Europa keeps motor-sailing  on “squall mode” as more are expected to pass over us during the afternoon. The relative stability returns by the evening, when less gusts affect us. And still under winds of 25 to 30kn Outer Jib is set again. Before midnight and after not being hit by any other squalls in a while, slowly more sails are set, starting with the Mizzen Top Mast Staysail.

All this weather situation is mostly caused by the Low Pressure system that we left behind, with its associated cold front passing now over South Georgia, leaving the area we are sailing at the moment under unstable conditions, rainy and with chances of meeting squalls on our way. At the same time, ahead of us a High Pressure ridge produces stronger winds than forecasted. All spiced during the day by the strong current flowing off the Weddell Sea on a NE-ly direction. Late at night the current helped us, now with its NW-ly flow. We were actually crossing the contact area between two oceanographic currents, the Weddell gyre and the large Circumpolar current. This zone of confluence produces eddies affecting our progress with flows in one or other direction.

Under those variable conditions that we experience since we start our way along the Scotia Sea, 310nm has been sailed from Cape Disappointment. And now we find ourselves 222nm North of the icy waters around South Orkney Islands, unreachable due to the pack-ice situation around them and the blowing S-ly winds. Now we definitely head towards the mythical Elephant Island, 394nm away from us. As the island is loaded with history, the most well-known being the chapter Shackleton's quest for survival after losing his ship “Endurance” in the Weddell sea, today we broadcast a documentary in the lounge about his ill-fated expedition.

The day had also room for some talks, first our Boatswain Katlin went on with a Seamanship-sailhandling review on proper ways to furl a sail, make a good gasket, coil a rope, commands used while setting or sticking sail and knots more frequently used up our rig. Also our guide Belén did a lecture on whale watching and how the business swap between whaling and the use of the whale as a touristic resource.