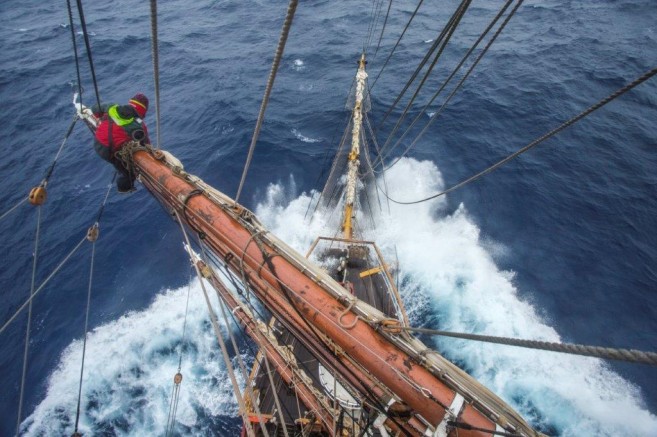 Until the beginning of the new misty and rainy day, there is no other option than motorsailing as close to the wind as possible with the Lower Staysails and Inner Jib set, confronting strong NNW-ly winds. Later on, even those few sails are taken away and furled as we steam straight into 20kn of wind, gaining some ground towards Southern Patagonia, with both of our engines roaring. Luckily during the early morning and until the afternoon the conditions calmed down, making life on board more comfortable for part of the day. With calmer weather and sea state Europa increases her speed too.

In the afternoon, still under the similar wind situation, but with increasing swell, the lower Staysails and Inner Jib are set again as we slightly change course a bit more towards the NE. Trying to keep them full we steer on a course as high as possible to the wind again. Like this, the enraged Drake gave us a bit of a pause during a few hours, when many of us venture out of their cabins again and our guides could even give a couple of talks.

Jordi reviewed the Antarctic pinnipeds. This group of Marine mammals include the families of the Fur seals plus the True seals. Having still in our memory all the species of them that we have seen during the last days, it is easy to introduce the differences between both groups and also between the different species. We were lucky enough to have seen all the ones that are commonly present in the Antarctic Peninsula. In the afternoon we had a chance to attend another talk by Belén named “From whaling to whalewatching”. That lecture introduced us to the big changes of attitude towards the whales that happened during the history. Whaling, until almost the extinction of many of the species, has been one of the most important ways of living for the communities from historic times whereas nowadays, with the use of mineral oils, there is no need for rendering their blubber into animal oil. Even though a smaller scale hunt for their meat is still happening in some countries, it has been proved (where the killing of the animals is not essential for human survival like in some Greenlandic settlements) that an alive whale can indeed be more profitable than a dead whale. Iceland is a
great and interesting example to analyze this big transition where even being still a whaling country, whale watching has become rapidly one of the most important economic incomes at national level. Now, this is a win–win situation for the animals and the people including the locals who are even more willing to support whale conservation and research in the present and in the future.

As forecasted, after this afternoon lecture, the sea state and wind start increasing gradually. Worsening weather and for sure also rising swell are expected for tonight. Both a guarantee for a rocky continuation of our journey. As soon as the waves grow again, they start breaking against our hull slowing our progress. The ship heavily pitches and rolls again, feeling the fury of the untamed Drake Passage. Starting in the late evening and during the night, good steering from deck becomes difficult, and is taken over by the bridge. Just the lookouts are needed from the voyage crew watches. Getting deeper into this wild, overcast, foggy and rainy Drake Passage there is actually not much to see beyond a ceaseless succession of rolling waves, increasing gradually in height as the hours pass by. And for many of us who cannot venture on deck due to the seasickness, the celling of our bunks and inside of a toilette bowl are becoming our only sights once more. As a word for consolation: It will take us just a few more days to finish this difficult crossing of the Drake. For now it is just 310nm to cover, as we could sail 118nm during the last 24h.

In the dark hours Europa braves again high swell and over 40kn of winds, as the engines work our way northwards at full power. The ship weathers the waves washing over her decks and thundering against her hull. For many it can look like a pretty uncomfortable ride, but just a look to the past and the first explorers of those tempestuous waters, make us realize how fortunate we are of being safely facing those wild conditions in a ship like the Europa. By then the sailors had weeks in a row of ploughing the fierce waves, and in far more vulnerable vessels. For us, support of powerful and reliable engines, electronic aids for sailing, comfortable bunks, central heating, good food, and many other commodities make a big difference with the past. However, travelling in the Europa is one of the closest experiences you can get to the golden age of Antarctic exploration of the beginning of the 20th Century.