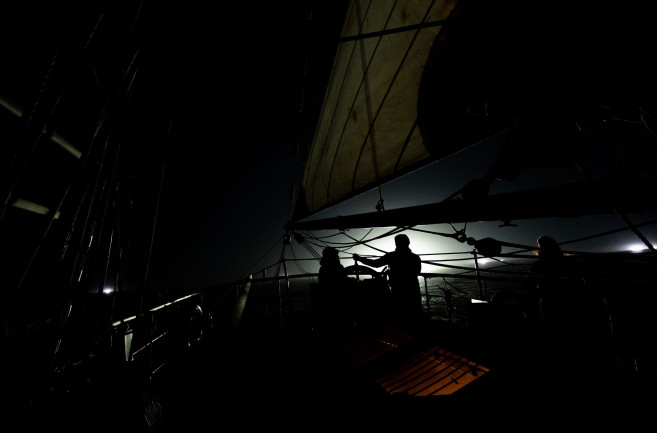 Rolling in the dark. That is what we're doing. Looking out of the wheelhouse windows I see nothing but the navigation lights. The decks are empty, all voyage crew is sleeping and only a few sails left. This afternoon we got close to South Georgia, but in a 30 knots blowing Northerly wind. To say that that wind is not such favorable to find shelter on the Northern shore of the island is an understatement.

With the wind predicted backing to SW in the early morning we decided to stay out at sea, in kind of deeper water and wait for the wind to move. So here we are. Lying hove to, nicely rolling on the left over swell and waves of the wind that started to decrease already.

Then why are we in the dark. This all has to do with the approach of South Georgia. The island is a birds paradise. Those birds are not used to artificial light, but very much attracted to it when it shines. When they fly onto lighted ships it happened that they badly hurt themselves or even died. Therefore one of the rules to comply to in these waters is to darken the ship as much as possible.

On Europa we are very good at darkening the decks. All blinds and portholes are closed. Other openings covered with cardboard. Equipment in the wheelhouse maximal dimmed or covered where possible. If we would dim the navigation lights we could as well be the ancient Flying Dutchman creeping up without you noticing until it is too late.

Nice piraty thoughts, but back to reality. There is not other ship around, we are still rolling alone, the daylight will soon start to
appear and then we can set course to Right Whale bay and be explorers in a friendly and harmless way.

Hi Captain Janke! Would love to be on board 'Bark Europa' again and visiting these extraordinary, , beautiful and pure places one more time.... ...ik reis ook zo met jullie mee.