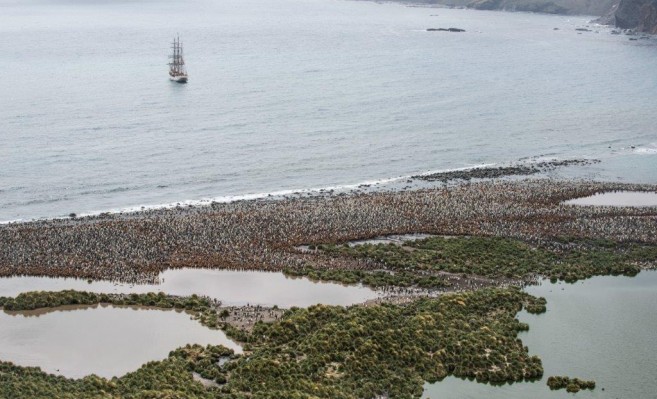 A couple of hours on the way to Royal Bay and a quiet night anchored at Moltke Harbour followed the great experience we had taking in the beauty of St. Andrews Bay. Moltke is barely 3nm further south from the landing site we plan for this morning. Before breakfast the anchor comes up and Europa slowly makes her way through the uncharted waters of the bay trying to properly locate the spot where to set foot. None of the crew or guides has been here before, between Will Point and Brisbane point. Will point is another place in this area named after a member of the International Polar Year expedition. The scarce guidelines written about the site are quite clear: “The coastline offers no protection from the gale-force winds that often descend the Ross Glacier, and landings are near
impossible in all but calm conditions”. Knowing this is one of the windiest, if not the windiest place on South Georgia, and that very few people have managed to land here – we will give it a try, owing to the fact that once ashore it looks greatly promising for a fantastic morning activity. The large amount of King penguins that make their home out of this spectacular place and the wild surroundings are worth to try to land and explore.
Luckily the scout zodiac sent to assess this ill-famed place comes with good news, the seas breaking on the shallow moraine protecting the flat calm Beaufoy Cove are manageable, and our guides wait for us ashore. For one or other reason, probably because at this stage of the trip and after several great and hard days in South Georgia some needed a morning rest, several people remained on board missing what turned out to be a most stunning King penguin rookery in great sea conditions and great weather. Guarded by the forceful winds of the island and shielded behind shallows that practically block the access ashore, is a seldom visited area. But if it would be an accessible one, sure would stick together with other legendary landing spots in South Georgia. Finishing a successful morning it was time to board the ship under spectacular skies decorated with huge lenticular clouds. Soon Europa makes her way to the last place we will visit here before setting sail to latitudes further south, Gold Harbour. This small bay is considered a “South Georgia in a nutshell”, being as well one of the most beautiful in South Georgia. But the rolling in the big swell and the strong winds that hit us on the way made the crew and guides question the success of this afternoon activity. As we enter the bay, just a warm breeze and flat calm seas welcome us. Soon it becomes obvious that the formidable profusion of wildlife along the shoreline will affect the afternoon plans for landing here. Literally there is no space left at the crowded beach to sneak-in with a zodiac and land. The coast is jam packed by King Penguins, plus several hundreds of Elephant seal weaner pups, seem to still wait for their mothers to return and feed them. Amongst them still some harems could be seen with various bull beach-masters and their females, some of them ready to mate, others still nursing pups but already rounded up in groups by the big males. Many youngsters gather in what seems to be a
swimming pool playground in several protected areas along the coast, training zone for weaner pups before facing the open ocean waters and the independent life. At the surge and breaking swell areas, King Penguins go back and forth from the huge colony to the sea. Curiously just a handful of Fur seals seem to be around, sure they will increase their numbers in a couple of weeks when elephant seals leave the beach. Like this, in what seems to be a late biological beach, we had the privilege of visiting an area that is representative of how the rest of landings would have looked about two weeks ago, when instead of Fur seals, the shorelines are taken over by Elephant seals. Facing the impossibility of setting foot ashore our guides decide for zodiac cruising along the coast, and have the chance to experience the place from the water, close to the breaking zone of the swell. When the zodiac cruise starts it seems again like the hard days already spent in the island, the difficult landings, long hikes and the changeable weather had its toll. Again some prefer to remain on board, missing one of the greatest experiences to possibly have in South Georgia. But, on the other hand, it’s understandable that some rest is needed too. After this activity we plan to set sail and start our way to Antarctica. Soon after finishing it was diner time, followed by heaving anchor and  the beginning of a new oceanic crossing over the frigid waters of the Southern Ocean. On our way to the South Orkney Islands and Antarctica. It all started with variable winds still under the influence of the land effects produced by South Georgia. The crew, with the help of a couple of us who don’t seem to need a rest, set lower staysails, and topsails in both masts. Hours of wind shifts in speed and direction made for several sail configuration changes and bracing a few times, even having to start the engines for a while, until finding a more general Westerly wind field off the coastal areas. The new adventure at sea has begun.